Share All sharing options for: Brandon Bass Returns to the Orlando Magic's Rotation

When the Orlando Magic signed burly power forward Brandon Bass to a 4-year, $16 million deal less than one month after the bigger, stronger L.A. Lakers eliminated them in the NBA Finals, conventional wisdom said that the Magic were giving in, abandoning the three-point-happy style that had brought them much success during coach Stan Van Gundy's two-year tenure. Surely Rashard Lewis, who led the league in three-pointers made and attempted last year at the power forward spot, would shift back to his natural position of small forward, and Orlando would play a more traditional game overall.

Instead, Bass has languished at the end of the bench for much of the season. Lewis continues to start at the four, while second-year man Ryan Anderson, whose combination of three-point range and solid rebounding is rare among players his age, gobbled up the backup minutes. A frustrated Bass and Tony Dutt, his agent, were rumored to have sought a trade before ultimately backing off and deciding to let the situation play out. It's important to note that throughout all this time, Bass has remained professional and continued to work on his game, and has not sulked.

It appears as though that patience has paid off, for all parties involved. With Anderson mired in an awful shooting slump since January (50.4% True Shooting, compared to 58.8% from October to December), and with Orlando's schedule featuring more athletic power forwards on the opposing side, Bass is getting a chance to prove he's a good fit with this Magic team, as he's been the first power forward off the bench in each of Orlando's last three games. Moreover, Orlando is starting to see a return on its moderately priced investment.

First, to illustrate Bass' sporadic playing time, here's a chart breaking down how many minutes each power forward has played in each game this season. Note how Bass, represented with red, shows up erratically, while Anderson (blue) is more consistent. Also note that the minutes sometimes exceed 48 due to Lewis spending time at small forward and/or Bass playing center in certain games. UPDATE: I've fixed the chart so all the minutes from each game line up. My favorite thing this chart illustrates is how Marcin Gortat, in purple, went months without playing at that position, then logged 11 minutes there seemingly out of nowhere in a Magic win over Boston. You can click the image to enlarge it. 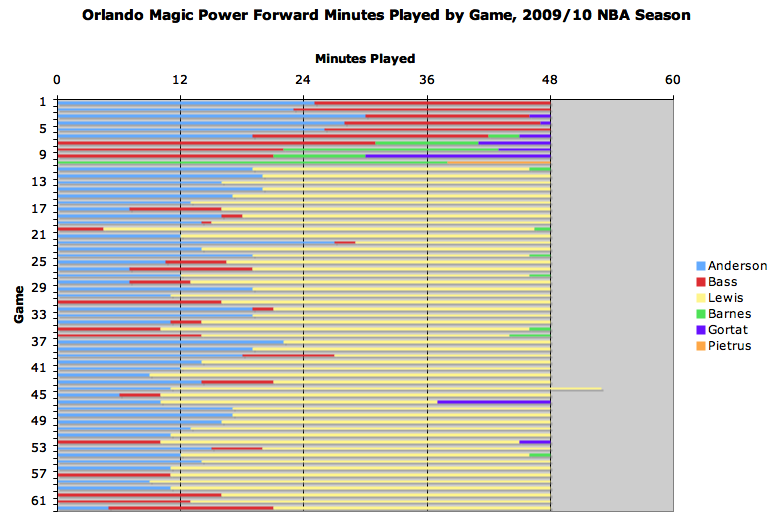 Although Bass has played better lately--I hesitate to say he's "excelled," since he's still a work-in-progress defensively, in March--and although Anderson has regressed, there's still a reason why Van Gundy's decision to use Anderson more overall was the right one: Orlando's a better team with Anderson on the floor, despite the fact that Anderson's individual stats only marginally best Bass'. As of 82games.com's latest update, Orlando performed 6.6 points per 100 possessions better with Anderson [ed. note: misuse of wording] on the floor as opposed to off it. With Bass, the Magic are 11.7 points worse per 100 possessions, meaning Orlando is an astonishing 18.3 points better with Anderson over Bass per 100 possessions. If you prefer adjusted plus-minus, Anderson has Bass beat there as well, sporing a two-year adjusted plus-minus of 6.34 to Bass' 1.87, per basketballvalue.com's latest update.

But Bass needs to play in order to get comfortable, and with Anderson slumping, now's the best time to get him minutes. Additionally, as you can see in this video of his press conference after last night's win against Golden State, Van Gundy said he consulted the schedule and found that many of Orlando's opponents this month are "very, very quick at the power forward spot," and that he prefers Bass against those matchups because his athleticism enables him to "handle" those assignments. He also said that he wanted to play Bass in several consecutive games, "not just one game and then off for another two weeks" because he "wanted to see what he can do."

But I'm more curious about April, May, and possibly June. As great as Anderson's been this year, Bass might be better equipped to tangle with Orlando's potential playoff opponents. Miami has Michael Beasley and Udonis Haslem; Chicago has Hakim Warrick and Taj Gibson; Toronto has Chris Bosh and Amir Johnson; Boston has Kevin Garnett, Glen Davis, and Rasheed Wallace; Cleveland has J.J. Hickson and Antawn Jamison, against whom Van Gundy has repeatedly given Bass the nod over Anderson. Former Magic forward and current NBA TV analyst Dennis Scott may have been right when he said Bass could be the Magic's difference-maker in the playoffs, although he emphasized Bass' experience, and not the Magic's matchups, in making that comment. What I'm getting at is that there's no time like the present--or, really, no time like training camp--to get Bass acclimated to his teammates, and vice-versa. Anderson's a terrific player, the better player, and much more likely to be part of the Magic's long-term future than Bass is. But short-term, Bass has earned his chances.