Share All sharing options for: The Dwight Howard Manifesto

The numbers say Kevin Durant, LeBron James, and Dwyane Wade are the players who deserve to be in the mix for the NBA's Most Valuable Player Award. The mainstream media will mention other names and offer irrelevant reasons as to why Player A or Player B deserves to be in the discussion but at the end of the day, there are a variety of linear metrics that can be used as evidence to effectively decide the MVP and the stats strongly back the names above. Unfortunately, the voters who decide the award don't always choose the right person but that is neither here or there.

There's another player who deserves to be mentioned as a worthy MVP candidate and his name is Dwight Howard. Perhaps you've heard of him. Howard is one of the best players in the league, yet you wouldn't know it sometimes by how often critics target him. Especially when compared to his peers like Durant, James, and Wade, who are praised more than they are criticized. Sometimes it seems like the opposite is true for Howard. Is some of the criticism of Howard warranted? Sure, but at the same time, some of it isn't. Which brings us back to Howard and the MVP race. At times, the critics' voices have been so loud that people have overlooked the fact that Howard has taken his game to another level since the middle of January and has carried his team on his back at the same time. Yes, it'd be nice if Howard played the entire season like he has the past month and a half but it's also important to note that he has taken his game to another level since the middle of January. Howard is playing some of the best basketball of his career right now and even though he's produced like this in the past when looking at monthly splits, it's the way he's been producing that's been impressive. 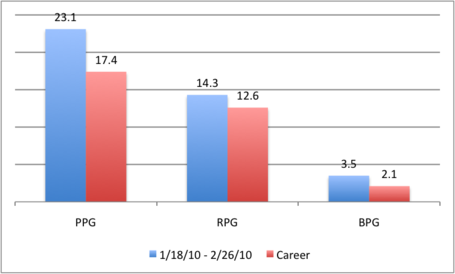 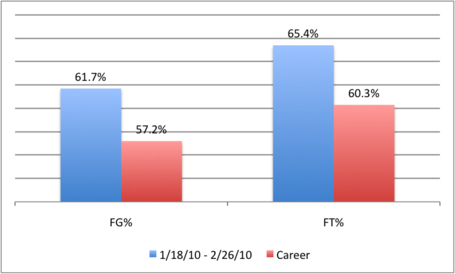 He's just patient down there [in the paint]. He's changed the way he plays. He doesn't force things now. People want more and they're getting more. He's by far the biggest reason we're winning games. People are going to have to give him more credit.

Against Houston, Howard had 30 points, 16 rebounds, and made all 11 of his field goal attempts. In the process, Howard managed to do three things: 1.) set a franchise record by recording, at the time, his 19th straight double-double (breaking a mark previously set by Shaquille O'Neal), 2.) make 11 shots, the most ever without a miss by a Rockets opponent, and 3.) become the first player, since Wilt Chamberlain accomplished the feat in 1969, with at least 30 points and 15 rebounds without a missed field goal attempt (minimum 10 attempts). All in all, that game epitomized Howard's growth on offense because he scored in a variety of ways using a plethora of post moves. It's something Howard has done all year but he's been doing it with greater frequency and efficiency the past month and a half.

For example, the Magic execute 4-out/1-in offensive sets with Howard and he's been doing an excellent job of reading defenses. If Howard is single-covered, he'll begin a post move by either facing up or backing down his defender. If Howard is double-teamed, he'll kick the basketball out to a teammate along the perimeter, reposition himself, get it back, and try to score if the help defender leaves him and he's guarded one-on-one. From there, Howard has many ways of scoring on offense as my colleague Ben explained this past week:

He can set up on the left block, against anyone, and drive through the lane for a righty hook, for instance. Or he can counter with a drop-step to the baseline and finish with his left. Or he can face-up, jab right, drive left, and improvise from there. Or he can drive into the lane, stop, fake, and either draw the foul or loft in a hook. Or... you see where I'm headed here. His offense is a bit more nuanced than some people might think.

And that's just when Howard is on the low block.

When Howard is being double-teamed or even tripled-teamed and he's finally forced to give the ball up, he's doing a great job of being patient and passing it to the open man. What Howard will do, more often than not, is take a few dribbles backwards while he's posting up to expedite the process. Howard's assist totals may not dazzle but rest assured, he's improved on his ability to pass out of the post. However, it doesn't necessarily show in the box score.

Things are finally slowing down for Howard on offense. Howard is not rushing things but instead, he's taking the time to figure out how to best score on his opponent. Because of that fact, players like Kendrick Perkins, who have had success stopping Howard in the past, are no longer defending him with as much effectiveness. As such, Howard is getting the basketball more because he's proving he can score on anyone. Howard is demanding the basketball, too. No longer is Howard taking a passive approach with his teammates - like Mickael Pietrus - when they don't involve him in the offense. Normally, selfishness isn't applauded from a superstar of his caliber but the praise is warranted in this case. Howard is the Magic's most efficient offensive player and he leads the league in True Shooting Percentage (63.1%) so he has the right to tell his team, "just give me the damn ball."

Almost all of the criticisms of Howard on offense are out-dated. For years, critics have hung on the argument that Howard is an unskilled offensive player and it's untrue, now more than ever. People may look at Howard's averages, come away unimpressed when they read 18.5 points per game, which is a shame because it's not an accurate reflection of his scoring abilities. Howard can, without a doubt, score 23+ points per game if push came to shove. Howard has proven he can score that many points on a consistent basis but sometimes, given the myriad offensive weapons in Orlando, he doesn't have to. Everyone seems to get so caught up in scoring that they ignore everything else about Howard.

When it comes to defense, there's Howard and then there's everyone else.

Other players, like Anderson Varejao, will come up in the conversation for Defensive Player of the Year and deservingly so but there's almost no contest. Howard is the main reason why the Magic are an elite defensive team in the NBA and the statistics back it up, whether it's traditional or advanced.

Taking a look at the Four Factors reveals Howard's impact on defense, also. Orlando ranks fourth in opponent effective field goal percentage (47.7%), first in defensive rebound percentage (77.3%), and eighth in opponent free throws per field goal attempt (20.8). Howard is the player most responsible for these rankings. How? Besides leading the league in rebounding, Howard deters opponents from entering the paint [ed. note: the Magic rank 1st in opponent field goal percentage at the rim], thereby forcing teams to shoot jumpers from the perimeter, and thus eliminating chances for easy baskets and trips to the free-throw line. Add the fact that Howard cleans up the mistakes of his teammates, excels in defending pick-and-rolls and post-ups, provides great help-side defense, and that explains his team-wide defensive effect.

But nothing highlights Howard's impact on defense better than the effect he has on James, arguably the best player in the league. John Schuhmann of NBA.com writes:

When Howard is on the bench, James simply destroys the Magic. Note that the numbers above are per-36 minutes, but James has averaged 42.3 minutes in the 16 games. So his no-Howard numbers translate to 41.6 points, 7.2 rebounds and 8.7 assists per contest.

When Howard's on the floor, James' numbers are still strong, but there is a clear drop-off, especially in the scoring department. James' shooting percentage isn't down much, but he's getting fewer shots and making much fewer trips to the line.

And when we look at the distance of the shots James is taking, we see that he's just not getting into the paint.

The Cavs' overall team numbers against the Magic reflect those of their star. With Howard on the floor, Cleveland scores just 102.3 points per 100 possessions and takes 49 percent of its shots within 16 feet of the basket.

With Howard on the bench, the Cavs score 110.5 points per 100 possessions and take 54 percent of their shots within 16 feet of the basket.

This may be outlandish to say but Howard is the LeBron James of defense. Howard is so dominant that the Defensive Player of the Year Award is his to lose for the foreseeable future and he's a shoo-in to win it this season, given that he's on pace to become the first player in history to lead the NBA in blocked shots and rebounds for a second consecutive year.

Howard won't win the MVP this year (James will because it's no contest, in my opinion), although he deserves to be in the discussion. But if Howard can string together an 82-game season where he plays like he has been since the middle of January, he may have a decent chance of winning it some day.

The total package is there, contrary to popular belief.

And he's still getting better.