In previewing the Orlando Magic's game tonight against the San Antonio Spurs, Brian Schmitz of the Orlando Sentinel notes that Magic GM Otis Smith seems to have built his team in the Spurs' image:

If there was an NBA team that the Orlando Magic modeled themselves after, it would be tonight's guest, the San Antonio Spurs.

Magic General Manager Otis Smith, long an admirer of the four-time champions, can point to the Spurs' businesslike approach to the way they've surrounded a great big man ( Tim Duncan) with sharpshooters through the years.

It's a fair comparison. Quite fair, as we'll soon see. Dwight Howard fills Orlando's Duncan role as the franchise center, while there are also parallels to draw at other positions. Speedy point guards Jameer Nelson and Tony Parker run the Magic's and Spurs' offense, respectively, with a shoot-first mentality, though Nelson is more likely to pull up for a jumper than drive to the basket, which runs counter to Parker's M.O. Vince Carter and Manu Ginobili can score quickly and efficiently from the shooting guard position while providing help on the glass and in running the offense. Small forwards Mickael Pietrus and Keith Bogans lurk in the corners, waiting for a kickout from their center or a ball-reversal from the wing to snipe from long-range. Stan Van Gundy and Gregg Popovich roam the sidelines, having earned their peers' respect with their meticulous preparation and deft playcalling despite never having played at the NBA level.

But where the comparison between the two teams is most convincing is on defense, not on offense. The similarity between both teams' approaches on that side of the floor boggles, really. We'll take a look at it after the jump.

As promised, here's the chart. You can click it to view a larger version of it: 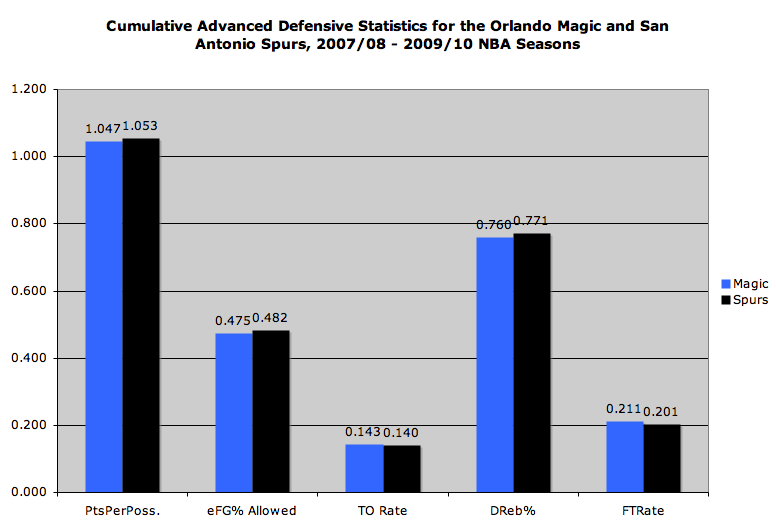 As you can see, since Van Gundy took over the Magic in 2007, the teams have succeeded on defense using the same methods. They defend the three-point line well, don't gamble for steals, crash the defensive glass, and avoid sending their opponents to the foul line.

Those second and fourth points are what stand out to me most, and make this comparison meaningful. All coaches, regardless of individual defensive philosophy, preach the importance of defending the three-point line and limiting second-chance opportunities. What makes Van Gundy and Popovich more unique is that they punt the turnover category, instead emphasizing staying with your man and not gambling for steals. Think about it: when was the last time you saw Pietrus dart into the passing lane for a steal? Or Bogans, who spent part of last season and all of 2007/08 with Orlando? That's rare. Deflections are a bit more common, sure, but there are few teams who consciously make this sort of effort.

The foul-shooting similarity also reveals insight into the coaches' philosophy. The free throw is among the most efficient shots in the sport because it is routine: it's always worth 1 point, always from 15 feet away, and always with the clock stopped. Play aggressive defense and contest every shot, Van Gundy and Popovich say, but don't hack people. Some old-school coaches stress the opposite of that last point: take, for instance, many of Jerry Sloan's Utah Jazz outfits, or the "no layups" Detroit Pistons of the 1980s and early 1990s. This approach values "sending a message" to the opponent over logic.

It's also worth noting that the Magic and the Spurs employ advanced statistical analysts, with Orlando installing its analytics department at Van Gundy's request in 2007.

What characterizes both the Magic's and Spurs' defensive philosophies, then, is discipline: the will to stay with your man on each play, and the will to keep your hands to yourself around the basket area. Of course it helps that both teams employ stellar defensive centers who keep everything under control, and one wonders if these coaches would use this approach if they had a less skilled defender manning the pivot. But as presently coached and constructed, the Magic and Spurs operate similarly on the defensive end. Considering the Spurs' lofty standing and long-term success among all professional sports franchises, that bodes well for Orlando.