Last night's performance by Dwight Howard, in which he had 30 points and 16 rebounds against the Houston Rockets, was special for a number of reasons. Howard was able to a.) amass those stats despite playing 22 seconds in the first quarter after picking up two fouls, b.) make 11 field goal attempts without missing a shot, and c.) set a franchise record by recording his 19th straight double-double, breaking a mark previously set by Shaquille O'Neal.

On offense, aside from the missed free-throws, it was a perfect performance by Howard. One of a kind, too. Via Jonathan Feigen of the Houston Chronicle:

The night could not have begun much worse for Dwight Howard. In 22 seconds, he had two fouls and a seat on the bench for the rest of the first quarter. That, however, was the only thing that stopped him. Once he returned to the game, he scored at will, making all 11 of his shots, the most ever without a miss by a Rockets opponent.

... and rare. Via John Denton of OrlandoMagic.com:

How good was Howard on Wednesday night? He became the first player with at least 30 points and 15 rebounds without missing a field goal (minimum 10 attempts) since Wilt Chamberlain did it on March 11, 1969.

How was Howard able to do it? 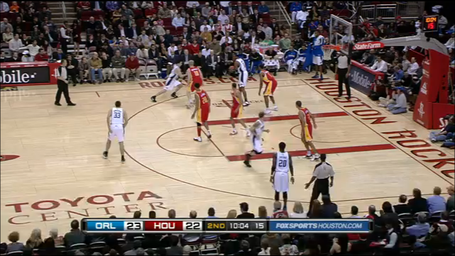 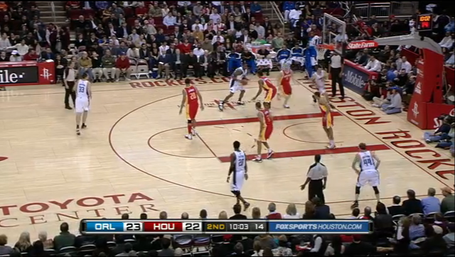 On this possession, the Orlando Magic run a 4-out/1-in offensive set. Howard receives the basketball in the post on an entry pass from J.J. Redick and goes to work. Howard faces up Hilton Armstrong for a few seconds, then decides to execute a spin move to his left. Because there's no help-side defense from the Rockets, Howard gets the easy layup. 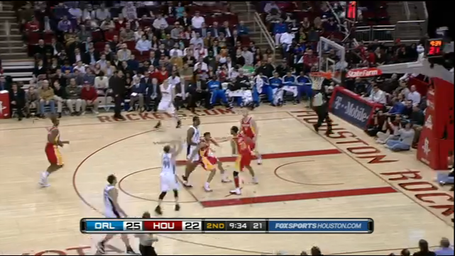 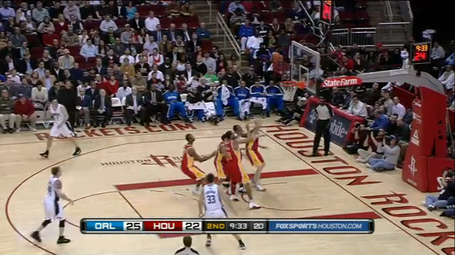 After a missed shot by Chase Budinger, the Magic get out in transition and Jason Williams elects to pull up for a jumper. Williams misses the field goal attempt but Howard, despite being surrounded by four Houston players (none of whom are great rebounders), is able to out-leap them and make the put-back layup. 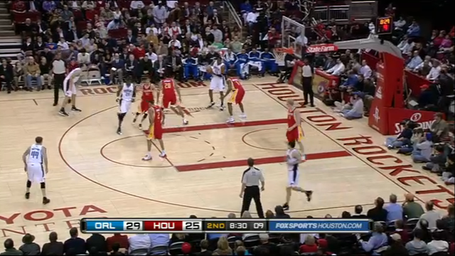 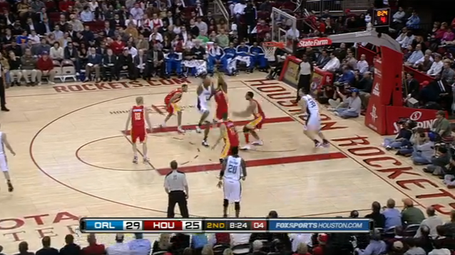 Again, Orlando executes a 4-out/1-in offensive set and Howard faces up Hilton Armstrong for a few seconds. This time, Howard sets up in the post against Armstrong, dribbles a few times to the center of the lane, and connects on the righty hook shot. 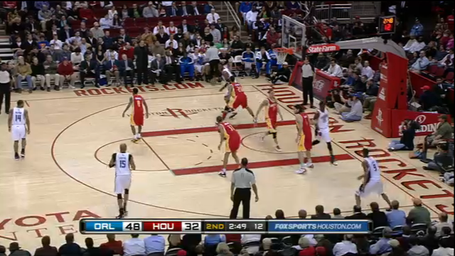 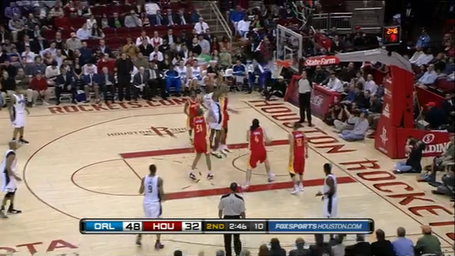 At this juncture in the game, head coach Rick Adelman has elected to go small and play Jared Jeffries at center. The Magic recognize the mismatch that Howard has and run another 4-out/1-in offensive set for him. Howard posts up Jeffries, gets position in the paint, and drills the shot. 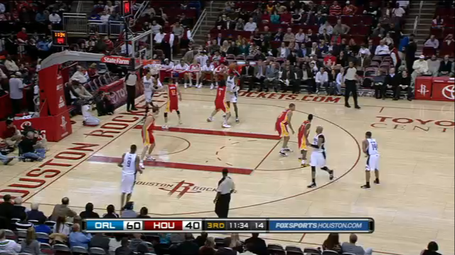 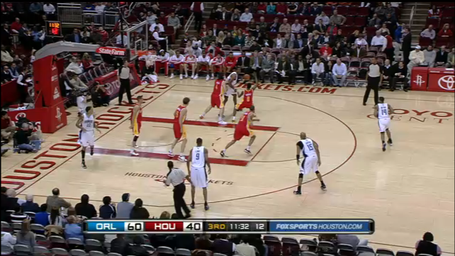 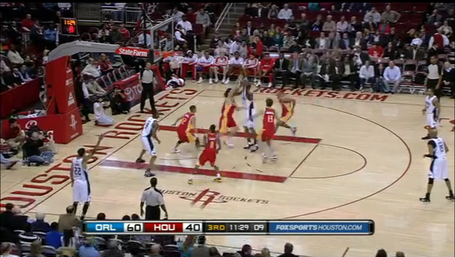 Luis Scola is defending Howard on this possession and Orlando is running another 4-out/1-in offensive set. It's clear, coming out of halftime, that Adelman is choosing to double-team Howard in the post to get the ball out of his hands. It's a strategy that works in the second half of the game but not in this case. Howard kicks the ball out to Jameer Nelson and resets his position on the low block. Nelson passes it back to Howard. From there, Howard takes a few dribbles and nails the lefty hook shot. 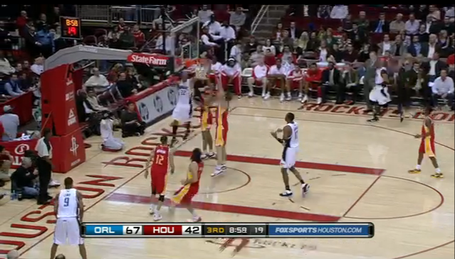 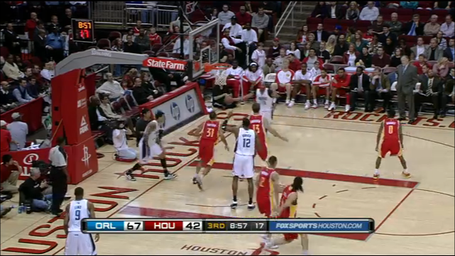 In this sequence, Shane Battier blocks Matt Barnes' layup attempt but Vince Carter gets the offensive rebound. Howard signals for the ball and Carter makes a beautiful one-handed bounce pass to him. Howard, then, proceeds to dunk the ball with authority. 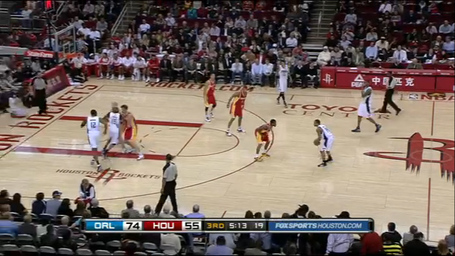 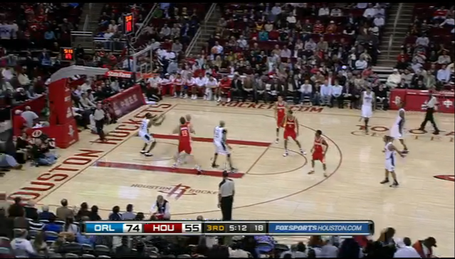 This is something Magic fans have seen for years and that's an alley-oop from Nelson to Howard. What makes it work, in this instance? Carter does an excellent job of screening Budinger and David Andersen so that Howard has room to operate and can receive the lob from Nelson.

Nelson gets the assist but Carter deserves the "hockey assist" on the play. 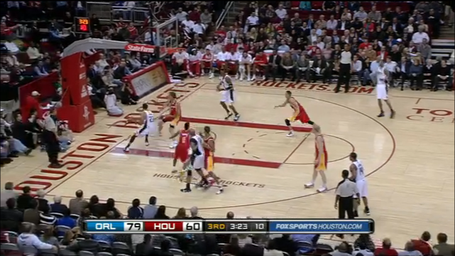 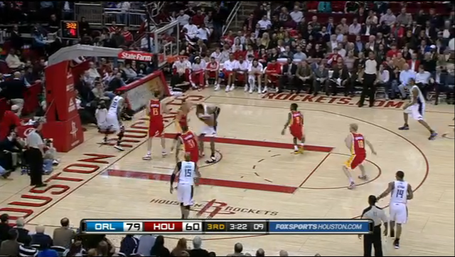 Here, Orlando runs the 1/2 pick-and-roll with Carter and Nelson but the Rockets defend it well. So, Barnes cuts to the basket and receives the pass from Carter. Because Houston decided to double-team Carter on the possession with Aaron Brooks and Battier, Andersen is forced to rotate on Barnes, and Howard is unguarded. Barnes gives him the ball and Howard gets another dunk. Kevin Martin tries to stop the inevitable from happening but to no avail. 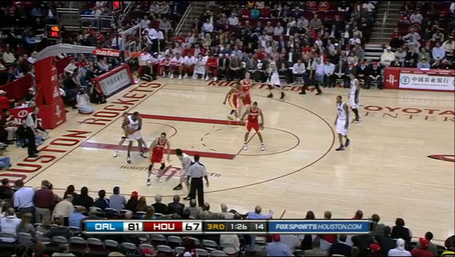 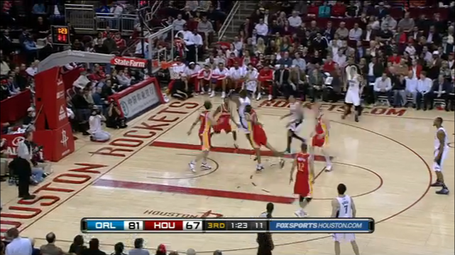 Another possession, another 4-out/1-in offensive set. Howard establishes position in the post against Andersen, dribbles into the paint, and connects on the righty hook shot. 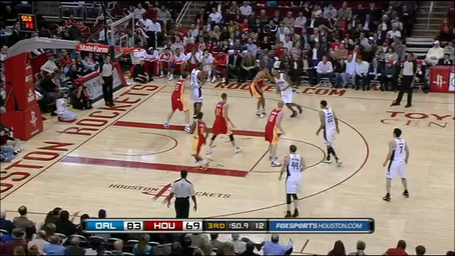 Howard posts up Andersen in a 4-out/1-in offensive set. This time, Howard executes a spin move that catches Andersen by surprise and he makes the layup. In my opinion, that was Howard's best move of the night.

Even Rockets color commentator Matt Bullard was impressed, "That was very Hakeem Olajuwon right there." 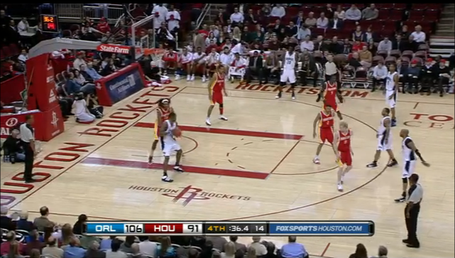 With the game winding down, the Magic run one more 4-out/1-in offensive set for good measure. Howard posts up Jordan Hill and caps off a perfect performance, as he makes the righty hook shot.

Because Yao Ming, one of the few players in the NBA who can defend Howard, is out for the season, it's no surprise that the Rockets' big men really struggled to contain Howard throughout the evening. And it should be noted that Chuck Hayes, an underrated post defender, only played nine minutes for Houston. Not sure why. But that shouldn't take away from what Howard accomplished by making 11 shots without missing and doing so in a variety of ways. Howard was supposed to dominate and he did. All in all, Howard is getting better on the offensive side of the ball and the league is finding out first-hand.

Good news for Orlando, bad news for everyone else.