Share All sharing options for: A Breakdown of the Pick and Roll Variation the Orlando Magic Used to Beat the Cleveland Cavaliers

Late to the party.

These were some of the words or phrases used to describe Vince Carter, as he drifted in and out of yesterday's contest between the Orlando Magic and the Cleveland Cavaliers. For three quarters, the Magic were able to keep pace with the Cavaliers but Carter was not contributing to the cause (three points on six field goal attempts). However, from the 6:54 mark in the fourth quarter until the end of the game, Carter (and Jameer Nelson, too) scored eight points and helped lead the Magic on a crucial 16-3 run that handed the Cavaliers its third straight loss.

How did Carter, out of nowhere, awaken from his slumber?

But it wasn't the 2/5 pick & roll, Orlando's bread and butter play, with Carter and Dwight Howard involved. Instead, it was the 1/2 pick & roll manned by Carter and Nelson. An offensive set that head coach Stan Van Gundy plucked from the New Jersey Nets' playbook when Carter was a member of the team last year and used it to jumpstart him in the fourth quarter. It was a decision made by Van Gundy that, more likely than not, was one of the biggest reasons why the Magic were able to win. Mainly because the Cavaliers haven't seen the play before and were forced to adjust on the fly.

Let's go frame-by-frame to see how Orlando was successful with the 1/2 pick & roll: 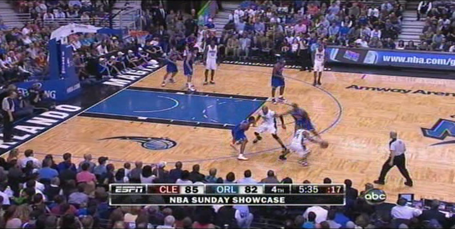 The first time the Magic ran the 1/2 pick & roll, Jawad Williams guarded Vince Carter. May seem odd that Delonte West didn't have the assignment but Williams has the requisite frame to - theoretically - defend Carter. West doesn't, given that he's undersized for a shooting guard. Here's what happened on this play:

Notice how the pick & roll coverage is blown by Cleveland. Jawad Williams shows, sort of, but he allows a passing angle for Nelson. Mo Williams exacerbates the problem by leaving Carter as the other Williams attempts to get back to his man and the rest is history. 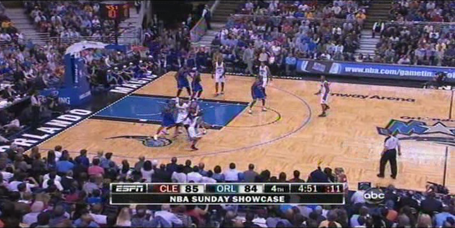 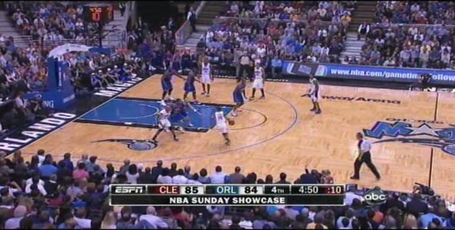 After the Cavaliers defended the 1/2 pick & roll with effectiveness on the first try (not shown in the picture), the Magic ran it again a few moments later. On the second try, Williams chooses to go under the screen and Nelson drills a mid-range jumper. 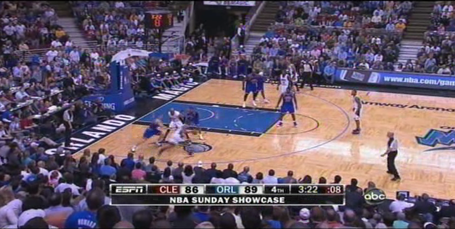 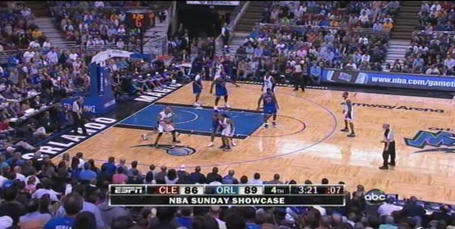 On this possession, Cleveland does an excellent job defending the 1/2 pick & roll. Orlando tries to run the play a few times but isn't able to create any scoring opportunities as roughly five seconds elapses on the shot clock. Eventually, Nelson has the basketball in the left corner and is being defended by Parker on a switch. Carter, guarded by Williams, sets the screen and Parker switches back on him. This is where Carter's ability to make superstar shots comes in handy. Parker's defense couldn't be any better but it doesn't matter, as Carter sinks a fadeaway jumper. 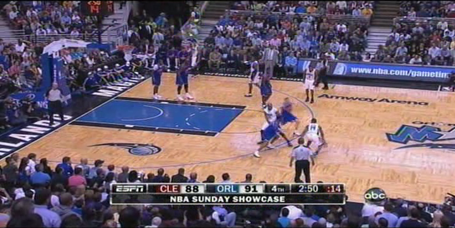 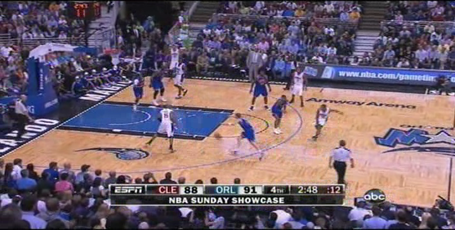 Next trip down the floor, the Magic run the 1/2 pick & roll but the Cavaliers don't do a good job of defending it, in this instance. Parker shows, or tries to, and Williams fronts Carter for a split-second. The problem is that Parker gets caught up in traffic and is late getting back to Carter. As a result, Nelson finds a passing angle and dishes it to Carter. Antawn Jamison tries to help but can't do much because he has five fouls and Carter is able to bank in a lefty layup. 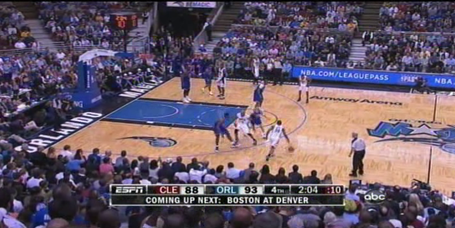 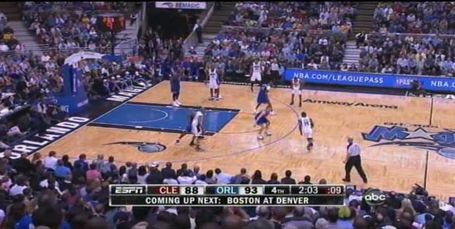 After a timeout by Cleveland, head coach Mike Brown decides to put LeBron James on Nelson in an attempt to slow down the 1/2 pick & roll. Williams is guarding Matt Barnes, by the way. It's a smart decision by Brown for two reasons. First, Barnes isn't an offensive threat so why not hide Williams on him (a counter to this would be to put Mickael Pietrus on the court, a player that shoots 35.6 from three for his career). Second, the Cavaliers' pick & roll coverage becomes nearly fool-proof as the strategy is to switch and the team has the personnel to do so without the 1/2 pick & roll causing problems.

In retrospect, it should be noted how important it was for Orlando to have a day to prepare for Cleveland. In the previous two meetings this season, the Magic played the Cavaliers on a back-to-back. For an individual like Van Gundy, someone that has made a reputation for being tactically sound and thoroughly prepared before games, those extra 24 hours make a big difference. In this case, it allowed Van Gundy an opportunity to incorporate the 1/2 pick & roll into Orlando's playbook.

A final comment. Expect Cleveland to be better prepared for the 1/2 pick & roll the next time the two teams face off, which will be on April 11th at Quicken Loans Arena and six days before the 2010 NBA Playoffs begin. Head coach Mike Brown is one of the best defensive-minded coaches in the league and rest assured, he'll attempt to come up with different ways of stopping the 1/2 pick & roll. One way has been previously mentioned - assign James on Nelson and Parker on Carter, then switch on the pick & roll if necessary. Of course, expect Van Gundy to find additional plays he can use to exploit the Cavaliers' defense.