The Orlando Magic have rolled along this season at 15-6, one of the league's best records, but more and more their fans are calling the performance of Rashard Lewis into question. The veteran sharpshooter's connecting on just 41.8 percent of his shot attempts from the field, his worst since his rookie season in 1998/99, and scoring 12.3 points per game. Given that he rebounds poorly for his position and doesn't make many plays for others, Lewis is the sort of player who must make a meaningful offensive contribution in order to warrant playing time.

With point guard and third offensive option Jameer Nelson ill the last three games, the Magic tried counting on Lewis to deliver more offense than usual. He didn't. In Nelson's brief absence, Lewis averaged 12.7 points per game on 35.7 percent shooting, and Orlando went 1-2. That's not to place the blame for the mini-skid squarely on Lewis' shoulders, because it's a team game, but there ought not be much doubt that Lewis could have contributed more.

It's not really a question of hitting from the outside. I'm sure Lewis can almost literally make 60 percent of his three-pointers with his eyes closed and the lights out. He's made 37.6 percent of his three-point tries this season, which is respectable, and he's but a few more makes away from the elite 40 percent barrier. The bigger issue is that the other areas of his offensive skill-set have eroded. A 45 percent mark on two-point shots from a 6-foot-10 forward is borderline unacceptable. Why has Lewis regressed so sharply from his All-Star form, just two seasons ago? What's changed?

Several factors are at play here, not the least of which is the way defenses approach Lewis. A career 39.2 percent three-point shooter who's made more triples than all but five players in league history, opponents have wised up and decided not to yield him that shot. They're running him off the three point line and forcing him to either give the ball up or shoot a two-pointer off the dribble. Lewis agreed with this assessment last month, telling me the men guarding him are "staying close to me and trying to make me put the ball on the floor." I guarantee you all 29 of the league's other coaches would prefer to concede a contested two-pointer off the dribble than an open three-pointer off the catch to a shooter of Lewis' caliber.

Here's a look at Lewis' shot composition, with numbers from HoopData.com, by location from his first three seasons with the Magic compared to this season. Note the decline in overall shot attempts, sure, but also how fewer three-point chances have led to an increase in two-pointers from beyond 15 feet: 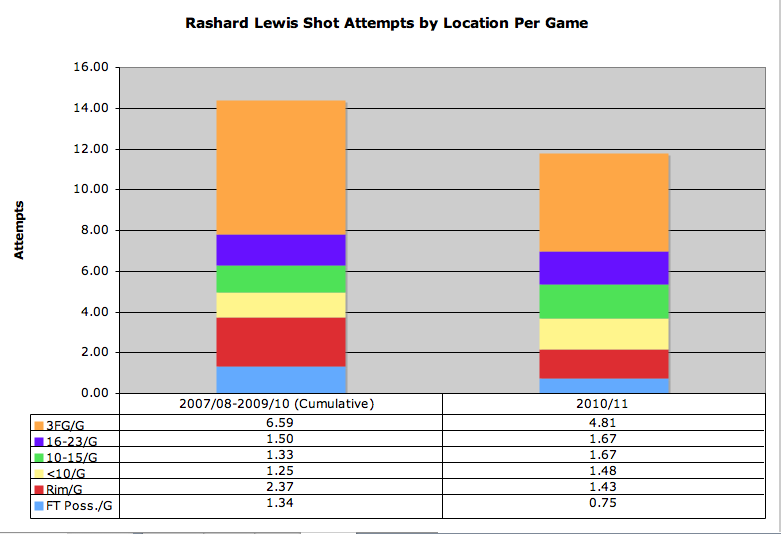 There's also the issue of who's guarding Lewis. Brandon Bass' emergence has eaten into Lewis' playing time at power forward, thus forcing Lewis down a position to the three. Here, he can't always rely on quickness or speed advantages he holds over most of the league's power forwards; he tends to face quicker, more athletic players. When Nelson turns the corner off a high Dwight Howard screen and draws Lewis' defender to help, Nelson has a split-second to deliver the ball to Lewis' shooting pocket, and Lewis in turn has a split-second to crank one from beyond the arc. If, say, Pau Gasol is guarding Lewis, he'll be so open he might as well be warming up before the game. But against a traditional small forward like Ron Artest, Gasol's L.A. Lakers teammate, who can cover more ground? That shot's a bit tougher.

Age, too, is a factor. Though Lewis keeps himself in solid shape, he turned 31 in August; he signed in Orlando a month before his 28th birthday.

Nobody can fight aging, but Lewis and the Magic can work together to fix the issues that've robbed him of his effectiveness offensively. The solution sounds simple: get him better two-point attempts. That means driving all the way to the basket instead of pulling up from 13 feet. It also means developing a devastating sort of two-point shot, or maneuver, that defenses need to honor. The Boston Celtics' Paul Pierce has stayed relevant in the latter stage of his career by camping out at the elbows extended and hoisting step-back jumpers, a move he's further strengthened with his ability to draw fouls with up-fakes. And Kobe Bryant of the Lakers has that series of nearly impossible to defend pivot and reverse-pivot moves that he uses anywhere on the court, particularly after picking up his dribble.

Of course, Pierce and Bryant's teams feature them as scorers, whereas Lewis has to pick up whatever scraps Dwight Howard, Vince Carter, and Nelson leave behind. And they're both surefire Hall-of-Famers, whereas Lewis is more of a role-player. Still, their success shows it's possible for aging scorers to stay effective by adding to their game as they get on in years. Lewis has never really done much off the dribble in his career, but here, I reiterate my belief that coach Stan Van Gundy needs to give Lewis more touches with his back to the basket. He won't back anyone into the stanchion and dunk on their face, or anything, but he has an underappreciated, nuanced low-post game that he doesn't often get to showcase in Orlando's offense. In 49 post-ups this year, Lewis has scored 48 points, according to Synergy Sports Technology. I know 0.979 points per possession doesn't sound impressive, but it ought to, as it bests Howard's mark of 0.921. Through Tuesday, Lewis ranked 15th in the league in post-up efficiency among players with at least 40 post-ups, yet they account for just 17.7 percent of his offense.

Bottom line? Lewis' best days are quite clearly behind him, but he need not go gently into that good night of his career, like Peja Stojakovic and Richard Hamilton have in theirs.