Brandon Bass was not the only power forward to whom I spoke after yesterday's Orlando Magic practice. I wanted to chat with Ryan Anderson, specifically to discuss his rebounding, as a follow-up to my editorial that made note of his solid rebounding of late.

After I explained how dominant he'd been on the glass since the end of the last regular season, I asked Anderson if he felt he had improved as a rebounder, or if his impressive numbers were a result of small sample size. Here's how he responded:

BQR: During [Rashard Lewis'] suspension [for the first 10 games]?

"Exactly. But even through the season, I'm still trying to find my place, so it's hard to play your game during that. But as the season progressed last year, I felt a lot more comfortable. And that's when I started to do a little bit more. Like rebound, like I know I can, and go for the offensive rebounds. I think that I can rebound like that, I think that's something that I want to do more consistently, but I had no idea that's how many rebounds I got."

Anderson's talk about getting more comfortable as the season wore on made me wonder if any rebounding stats evidenced it. So I put his numbers in a spreadsheet and graphed them alongside those of Brandon Bass, Dwight Howard, Marcin Gortat, and Rashard Lewis. The Magic's other bigs, in other words. Here's how the data shake out visually: 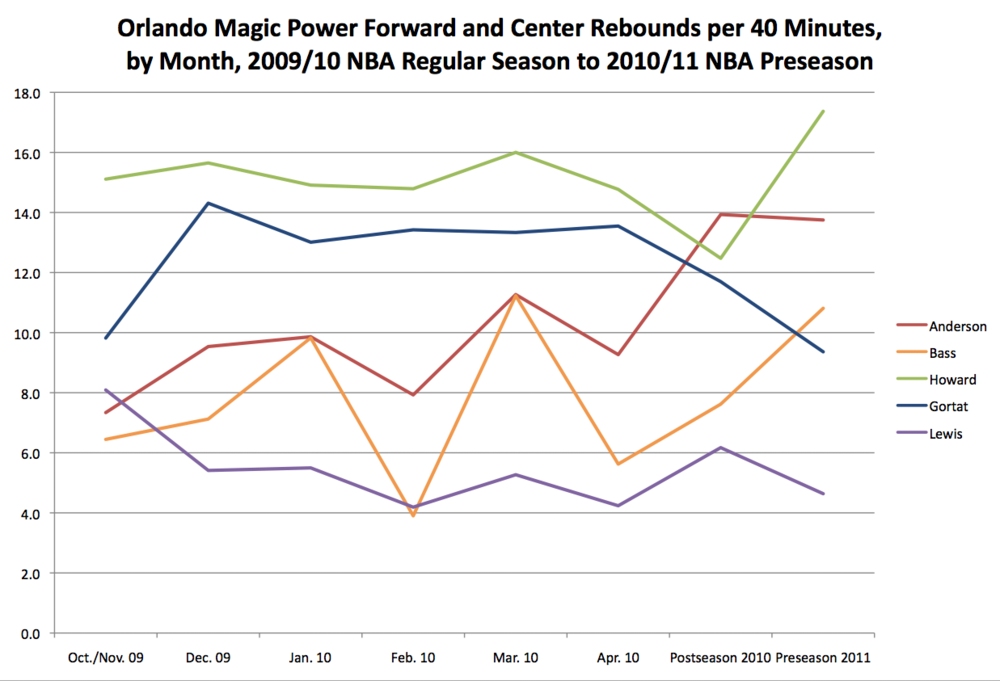 Howard, clearly, dominates here, which is what one would expect from the league's leading rebounder. Anderson and Bass are on the upswing, while Gortat has declined, and Rashard Lewis has never been special as a rebounder. I'm indeed inclined to believe Anderson when he says he thinks he rebounds more consistently now.

During the last bit of our conversation, which took place in a hallway leading from the practice court to the players' parking garage, Quentin Richardson wandered in our direction, having just completed taping something for broadcast on the Amway Center scoreboard. "Ryan's the MAN!" he shouted into my digital recorder on his way by, drawing chuckles from me and Ryan. Richardson, it seems, always has something to say.