I scarcely need to remind people who have followed the Orlando Magic this season that Vince Carter has struggled to find the range. Each errant shot he puts up further reinforces the following facts: He's shooting a career-worst 38.4% from the field and 30.7% from three-point territory. Since shooting an impressive 10-of-16 from the field in a late-December win over Milwaukee, he has failed to make more than 30% of his shots in any game he finished; he did shoot 1-for-2 against Washington before leaving with a separated shoulder.

Thing is, the shooting wouldn't be so bad if he didn't dominate the ball. But he has dominated the ball, ending a team-high 27.5% of the Magic's possessions when he's on the floor, according to basketball-reference.com. That's the highest usage rate for a Magic player since the 2004/05 season when Steve Francis used 28% of Orlando's possessions. Tracy McGrady and Shaquille O'Neal exceeded 27% usage four times each, rounding out the all-time list of ball-dominating Magic players.

Carter is, as always, confident in his shot. Dan Savage of OrlandoMagic.com transcribed this Carter comment after the win over Indiana:

"I believe in my shot. I don’t believe in second guessing yourself with ‘maybe I should this tweak this, tweak that;’ it’s overrated."

I don't believe Carter's problem is mechanical. He's just missing, from everywhere, and no one really has any idea why. Rather than trying to explain the poor shooting with something like, "his sore ankle and shoulder have limited him," or, "he's just getting old," (note: these reasons may be valid, but they do not interest me) I thought I'd just try to find any sort of correlation between Carter's shooting--be it shot-selection or conversion percentage--and a Magic win.

This sort of analysis, which would not be possible were it not for the incredible Hoopdata.com, might be simplistic or reductive, because it boils down a team's success or failure to one offensive player. I am not trying to pin the Magic's disappointing season all on Carter. But I do think his poor shooting is worth discussing sooner rather than later. With that in mind, let's get to what the numbers revealed.

The shocking result? Orlando is much better off when Carter attempts more shots at the basket. Magic center Howard referred to this approach as "attack mode" after Carter's aforementioned impressive performance against Milwaukee. The complete quote? "When he's in attack mode it makes things easy."

Yeah, no kidding. Here are Carter's shot attempts, broken down by floor zone, split by Magic wins and losses. 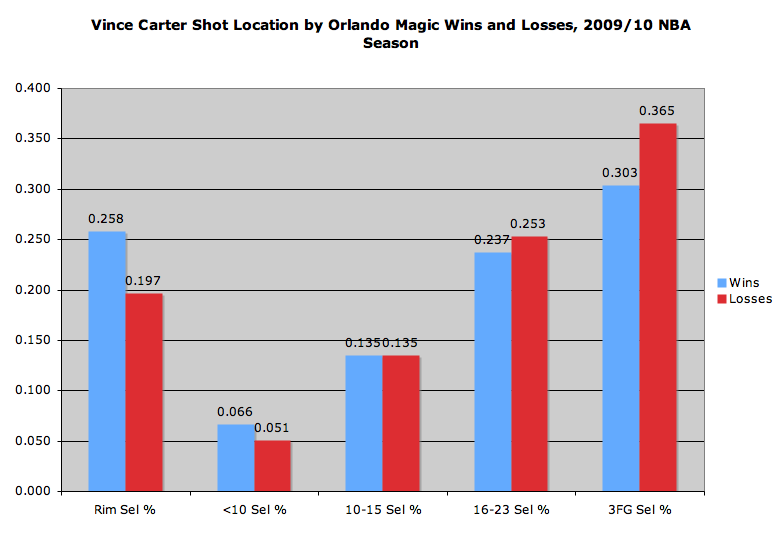 As we can see, not much changes with regard to Carter's shooting tendencies from midrange in Magic wins and losses. The indicator is that he takes fewer three-pointers and long two pointers in wins, which increases his number of attempts at the rim by a wide margin. Just getting to the rim is the key thing, as we'll soon see.

Now here's his shooting percentage by region, again split by wins and losses. 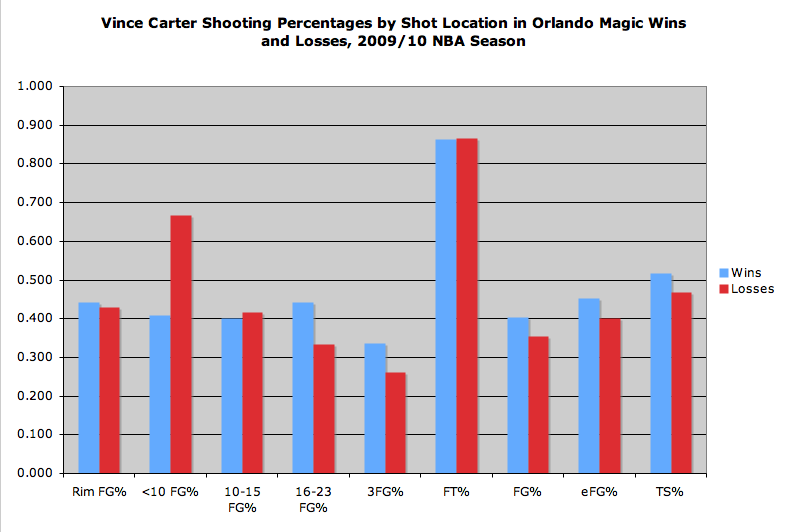 Carter shoots a slightly higher percentage at the rim in wins, but not enough for me to faithfully conclude that his making layups and dunks is a good indicator of Magic success. Nope, the man needs to have his jumper going. He's far more efficient on long two-pointers and three-pointers in wins than in losses... and you'll recall that in losses, he tends to take more of those shots. Again: when the Magic's highest-volume player in 5 years takes more shots at a lower percentage, the Magic tend to lose. We're not dealing with rocket science.

In November, I wrote about Carter's growing reliance on the jump shot in the last several seasons. The shot-selection isn't as shocking as the low shooting percentages. If Carter carried last season's shot percentages at the rim (56%) and from three-point range (38.5%) into this season, on the same number of attempts from each area, he'd have made 15 more shots at the rim and 13 more three-pointers. Taking this exercise further, he'd be averaging 18.5 points per game on 43.9% shooting from the field. Not great, certainly, but better than what the Magic could have expected Hedo Turkoglu to do this year had they re-signed him instead of trading for Carter.

In this instance, the stats confirm Conventional Wisdom: when Carter settles for too many jumpers, the Magic are worse off. When he looks to drive to the basket, even if he misses his shots there, it's a good sign for Orlando.

We should note that, even in Magic wins, Carter doesn't shoot an acceptable percentage from three-point range. Connecting on 33.7% of your three-pointers is like making 51% of your shots from inside the arc. But, obviously, 33.7% is preferable to 26.2%, which is what Carter shoots from three-point range in Magic losses. Yup, it's been a tough year for him. Fortunately, there's hope. Teammate Matt Barnes got off to such a poor start shooting the trey--19.8% through the first 3 months of the season--that it resulted in a Create-A-Caption entry with a punchline alluding to the game's official scorers counting his three-point attempts as turnovers. Since the calendar turned to 2010, Barnes has caught fire, making half of his three-pointers on nearly 3 attempts per game. If Carter got on a similar hot streak, with his high usage, the Magic's offense would improve tremendously... provided he struck a balance between the long ball and the layup.