Last night, the Orlando Magic picked up a much-needed win against an excellent Atlanta Hawks team. Our photographer, Bruce Maddox, was on hand to capture the action live. Click here to view photos in our Flickr gallery. If you prefer, you can make the jump to see some photos I wanted to highlight. I've reproduced them at a small size for display purposes, but you can click on them to view a full-size version.

If you're looking for a new wallpaper, I suggest using this photo of tonight's tipoff.

Magic center Dwight Howard pleads with referee Bill Kennedy after picking up his third personal foul in the first half:

Howard contended that he kept his arms straight up in the air, while Kennedy indicated (not in this photo) that Howard held his arms more horizontally and brought them down on Al Horford. Howard ultimately earned a technical for arguing the call. Here's a photo of the foul in question. What do you think? Does Howard have a legitimate gripe?

Matt Barnes caught fire from the outside in the third quarter, nailing both of his three-point tries. Here, J.J. Redick swings the ball to Barnes' awaiting hands.

Sometime in the third quarter, the officials huddled to discuss how to rule a particular play; I'm vague on details because I didn't bother to write down which play occurred before the break. Barnes took the opportunity to pass the game ball to children sitting in the front row, moving down the line to give each a chance to hold the ball.

As I noted in the game recap, Ryan Anderson drove aggressively all game long. Here, he takes the ball hard to the basket against Josh Smith.

Here's another play I mentioned in the recap, when J.J. Redick dove into an area near the Hawks' bench to save an offensive rebound from going out of bounds. Check out Joe Johnson's expression on the bench as Redick takes off.

Marcin Gortat shot just 2-of-6, but did get this transition layup to drop against Zaza Pachulia's defense. 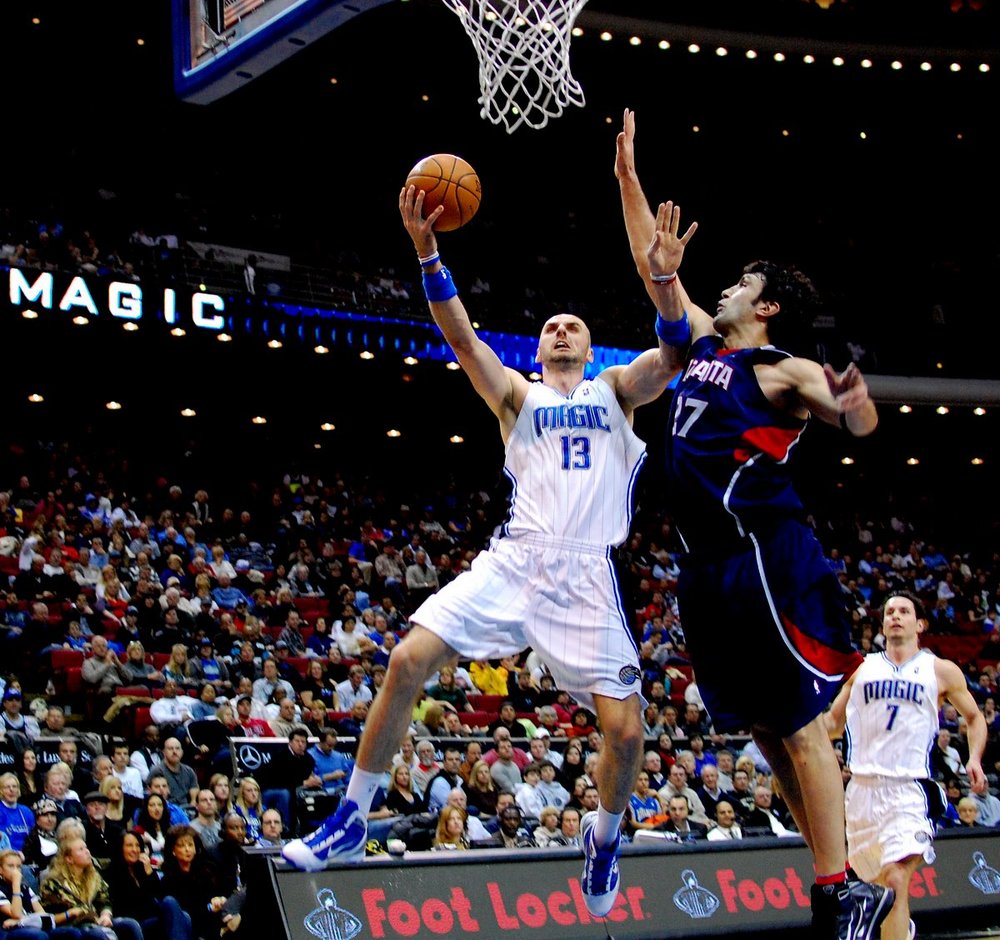 Finally, an image that really sums up how Orlando's night went. Backup point guard Jason Williams was electric on the fast break and, as coach Stan Van Gundy said, "was rockin' and rollin'." Here's Williams at his very best, pushing the tempo in transition and making an astonishing one-handed bounce pass. Mickael Pietrus is the lucky recipient here.

Again, to view more photos of the game, click here. Many thanks to Bruce Maddox for furnishing us with great photos.