So, Who Should Start for Rashard Lewis?

Share All sharing options for: So, Who Should Start for Rashard Lewis?

The question at hand is whether or not Brandon Bass, who will presumably start for the Magic at power forward while Rashard Lewis is sidelined due to suspension, is the best fit at that position for Orlando? Out of all the other players on the roster, there is one individual who could theoretically make a case for himself as being the more logical choice to log starter's minutes at the power forward spot, temporarily:

The main reasoning is that a player like Anderson would make more sense playing in the Magic's 4-out/1-in offense, more so than Bass, due to his ability to spread the floor in the same vein as Rashard Lewis. Although Bass is a capable player on the offensive side of the ball, he isn't able to shoot with as much range as Anderson.

I decided to compare Anderson & Bass and take a look at their respective numbers this past season to ascertain what each individual brings, or can bring, to the table. The fact that they each logged almost the same amount of minutes is a plus. 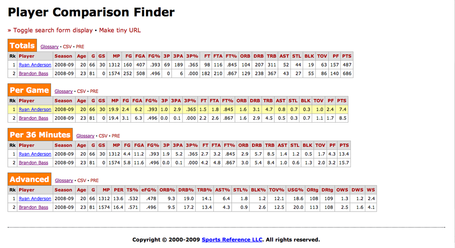 It's clear, when looking at the data, that Bass is the more efficient player, offensively. But that's it, in terms of clear advantages on offense. There are people that argue Bass makes sense starting at power forward because of his defending and rebounding. While Bass is a stronger and more athletic defender, based on his physical build, it's not clear cut whether or not he is a better defender than Anderson. Likewise, there are no differences between the two, rebounding-wise. They each rebound at the same rate. But the statistics could be deceiving.

So, what exactly does Anderson bring to the table that merits discussion as to whether or not head coach Stan Van Gundy should consider starting him? Mainly, his ability to spread the floor and shoot the three-pointer with good proficiency. Anderson's advanced shooting stats were average, at best, last year but there's no telling what type of improvements the Magic could see from him in his second season in the NBA. Bass has spent two seasons with the Dallas Mavericks and at this point in his career, barring something completely unexpected, his numbers have been consistent enough to assume he'll continue to produce at a similar rate.

The same can't be said about Anderson; his ceiling hasn't been established (the statistics indicate a similarity to Lewis, etc.) and his potential hasn't been completely harnessed, yet. For a rookie, like Anderson, to step into the league this past season and shoot 36.5% from three-point range is impressive, especially when you take into account the team he played for last year (New Jersey Nets). The talent disparity between New Jersey and Orlando is enormous and Anderson should benefit from playing alongside four All-Stars, where he'll see more open looks on offense. As such, Anderson could become as efficient of a scorer as Bass.

The fact that Anderson fits in perfectly with the 4-out/1-in system and allows Orlando to continue to play an unconventional lineup that has wreaked havoc against the majority of teams in the Association, makes the possibilities enticing. The same, frankly, can't be said about Bass. Because of his limited range on offense, the Magic have to play more conventionally with Bass. Which isn't bad, per se, because there will be times when the situation calls for it but it doesn't fully maximize the offensive possibilities for Orlando. That's the nature of the situation.

The lone downside in starting Anderson, at this point, might be his defense (I say might because he was slightly better than average, defensively, last year in New Jersey). Even though Anderson rates a bit better than Bass (his numbers are skewed, somewhat, because he played "out of position" in Dallas), according to the advanced defensive metrics listed above, it should be noted that Bass held his opponents to just 74.4% of their regular production, compared to Anderson who held his opponents to 88.5% of their regular production. Likewise, there's no denying that Anderson isn't as athletic or as strong as Bass. This may be what prevents Anderson from showcasing his abilities as a fill-in starter and additionally, as a role player once Lewis returns from his "temporary leave" and the depth chart returns to normal. Moving to a new situation and new system with the Magic should continue to help Anderson on the defensive end, though.

I will state, in my account of watching Ryan Anderson in the 2009 Orlando Pro Summer League, the effort is there.

My colleague Ben has touched on this subject, already, but it seems that Bass will remain ahead of Anderson in the depth chart for now. But if Anderson can become as efficient of a scorer as Bass (which is possible) and improve as a defender (which is possible, too), then Orlando may have their Rashard Lewis-lite and a regular contributor to the team.