Fact or Fiction: Rashard Lewis Is Superior as a Player to Hedo Turkoglu

Share All sharing options for: Fact or Fiction: Rashard Lewis Is Superior as a Player to Hedo Turkoglu

Yesterday, Dime Magazine posted an article which asked two of its writers to argue which player, between Rashard Lewis and Hedo Turkoglu, is superior to the other. Rather than regurgitate the information that was written by the authors, you can click here to read the assessments of both players. It's an interesting write-up.

Rather than follow the typical format for previous Fact or Fiction posts, I'm going to compare and contrast Lewis & Turkoglu, then allow the community to decide which player is better by voting in a poll. I'd like to stress that normally I wouldn't compare two players that bring different skill-sets to the table, but for the purposes of this exercise, I'll ignore my own protocol and compare each individual for the heck of it.

Here's how the two players stack up to each other, using advanced linear metrics: 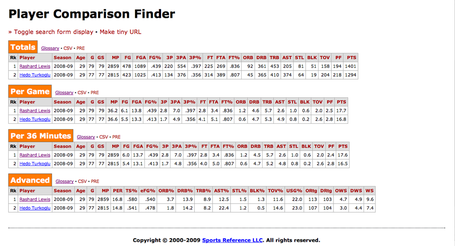 Rashard out-performed Hedo this past season ... 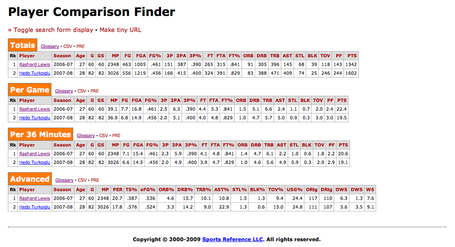 ... and in their respective career-years, Lewis was more productive than Turkoglu.

There's no doubt that if the primary objective on offense is to put the ball in the basket (which it should be, unless you're the Los Angeles Clippers), Rashard Lewis does a better and more efficient job of that than Hedo Turkoglu. The only thing that Turkoglu does a better job is passing the rock, given that his assist percentage is superior to Lewis'. That is Turkoglu's only clear advantage and to be frank, it's only because he has the ball in his hands a lot of the time.

Now, there are differences in how each individual goes about scoring. For Turkoglu, given that he has the skill of handing the basketball with proficiency as a point forward, he was involved in isolations and pick & rolls more (55.92% of the time). Lewis, on the other hand, played off the ball and preferred spotting up on offense (46.84% of the time). Sometimes, Lewis would post up but not as frequently as he did during his days with the Seattle Sonics, when he was the primary post player for the team.

Turkoglu may have more attention directed towards him because he has the basketball in his hands more, but that doesn't mean he is the better offensive player. Lewis receives criticism because his offensive game isn't more diversified, but one needs to understand the role he's playing with the Orlando Magic. Lewis is asked to spread the floor so that Dwight Howard is able to operate as effectively as possible in the lane. Lewis is capable of playing closer to the basket (see Game 6 of the Philadelphia 76ers series) but that's not his defined role.

If you put both players on a starting lineup full of replacement-level players (fancy term for average), Lewis' superiority stands out more because of his proven ability to score in an efficient manner in a variety of ways (as a spot-up shooter, in the post, off the pick & roll, etc). Turkoglu can execute in some of the same manners (not so much in the post) and can create his own shot more, but he doesn't do it efficiently. Not at all. Given his responsibilities on offense and given the team he plays for, local fans haven't been able to see Lewis' full offensive repertoire a lot. They have been able to for Turkoglu and that seems to be where the misconceptions begin to start.

Advanced defensive metrics are continually a work in progress, but they do paint a decent picture as to how good or bad a player performs on the defensive side of the ball. In the respective cases of Rashard Lewis and Hedo Turkoglu, each individual played above-average (whether or not that was necessarily true for Turkoglu remains in question) defensively, when taking a look at the numbers.

Via Kevin Pelton of Basketball Prospectus:

Rashard Lewis, Orlando - Fans who watched him in Seattle would have a hard time imaging Lewis as an anchor of the league's best defensive team, but his ability to hold his own in the post (and more, given a 13.9 opponent PER) has been critical to making the Magic's undersized lineup work.

Via David Thorpe of ESPN.com:

[Hedo Turkoglu] has length and feel. He's a coordinated athlete. He's also really tall and long. I don't think of him as winning the battle on grit, but it's not like there are a lot of times you watch a Magic game and think Turkoglu's getting killed! When he's engaged, I'd certainly say he's a net positive for your defense.

For Lewis and Turkoglu, what aids in their ability to defend with effectiveness (especially Turkoglu) is their length and wingspan. Because opposing individuals are intimidated by Dwight Howard's presence in the paint and won't attack the basket as much as they normally would, that allows Turkoglu and Lewis to keep in front of their men and disrupt their shots with their size. In Lewis' case, it's his athleticism that allows him to defend power forwards real well. It also helps that he, along with Turkoglu, have become more committed to defense since head coach Stan Van Gundy joined Orlando two years ago (something he demands from all his players).

For Rashard Lewis and Hedo Turkoglu, they each bring unique skill-sets to the table. For Lewis, it's his ability to spread the floor at the power forward position, thus creating a myriad of mismatches that the Magic can take advantage of frequently. For Turkoglu, it's his ability to play point forward and execute in the pick & roll.

But for all the hype surrounding Turkoglu's moniker, Mr. Fourth Quarter, he's one of the more inefficient players during that timeframe (38.9% from two-point range, 31.7% from three-point range). Lewis, on the other hand, is deadly efficient (47.7% from two-point range, 41.4% from three-point range) yet doesn't receive as much of a reputation as a clutch performer as perhaps he should. However, Lewis is certainly bolstering his case after a memorable 2009 NBA Playoffs. What it comes down to is the fact that Turkoglu has the ball in his hands much more than his former teammate, thus giving himself more opportunities to make something happen at the end of games. Because Lewis isn't as capable as Turkoglu in creating his own shot, that makes it a little more difficult for Van Gundy to draw plays up for him in crunch-time. Difficult, but not impossible - Lewis is an excellent spot-up shooter and plays have been designed for him in the past while he's playing off the ball (see Game 4 of the Cleveland Cavaliers series).

Contract's notwithstanding, who's better?

Every single advanced linear metric rates Rashard Lewis as the superior player to Hedo Turkoglu. Offensively, Lewis is better and more efficient than Turkoglu. Defensively, they're each relatively the same in ability and output.

All in all, it's pretty clear cut who's better.