Requested by the community.

Scott Skiles, as described by Shaq:

Scotty Skiles, then the team's starting point guard [...], was a leader.

Before there was a player that performed with heart and hustle, another individual embraced a gritty and gutty style of play.

For local fans, Skiles is fondly remembered for being around during the birth of the franchise and the growth of the franchise. Skiles has the rare honor of being drafted twice, first by the Milwaukee Bucks in the 1986 NBA Draft and second by the Orlando Magic in the 1989 Expansion Draft. Although Skiles didn't accomplish much with the former organization, he did accomplish much with the latter organization.

It took a year with the Magic for Skiles to get his feet wet and make an impact with the team. At the beginning of his first season with Orlando, Skiles was a bench player that didn't see much time on the court - 14 minutes here, 10 minutes there, etc. Sam Vincent, coincidentally Skiles' teammate at Michigan State, was the starting point guard for the Magic for roughly half of the year (45 games, to be exact).

However, Skiles showed the ability to be a deft passer, even in limited minutes. There would be plenty of games early in the regular season where Skiles would have 7-8 assists in roughly 20-25 minutes a game, more or less. Somewhat of a side note but certainly relevant within the post, Skiles is a perfect case for per minute statistics being relatively the same no matter how many minutes are played.

Look at the numbers.

As the year went along late in 1989 and early in 1990, Skiles began to see more and more minutes, which meant he was able to accumulate more and more assists. Points too, but Skiles was always known more for his passing than his scoring. Finally, near the end of his first year with Orlando, Skiles became the starting point guard - a position he didn't give up until Anfernee 'Penny' Hardaway was around.

The next season, of course, Skiles famously made NBA history. In a game against the Denver Nuggets late in the month of December in 1990, Skiles had thirty assists:

With about seven minutes remaining, I threw an alley-oop pass to Reynolds, who scored. It was my 29th assist, tying me with Porter. Coach Matt Guokas called me over and said that if I got one more assist, he would take me out, because we were winning big.

It was announced that I had tied the record, which put some pressure on me to break it. I made a few passes that could have earned assists, but either the shots were missed or one of my teammates would dribble the ball toward the basket before shooting, negating a potential assist.

Time was running out, and my total was still 29. Finally, with 19.6 seconds left, Reynolds scored on a 20-foot jumper off one of my feeds, and I had the record. I was very happy, and the crowd was yelling and cheering loudly for me.

Aside from setting a league record (which still stands, to this day), Skiles had a good year in 1991 - he achieved career-highs in points (17.2) & assists (8.4) and was named the NBA's Most Improved Player. It was the first time a Magic player was bestowed with the award (wouldn't be the last time, either). During that season, Skiles was arguably the team's best and most visible player. However, that changed quickly when current players progressed (like Nick Anderson and Dennis Scott) and new players arrived (like Shaquille O'Neal and Anfernee 'Penny' Hardaway).

After the jump, a look at Skiles' remaining years with the Magic.

Although Skiles was blossoming as a player, Orlando was struggling to compete as a team. In Skiles' first three seasons with the team, the Magic won 18 games, 31 games, and 21 games, respectively. However, with misfortune (losing season after season) came fortune (winning the 1992 NBA Draft lottery) and with the addition of O'Neal, came success. For Skiles, he helped usher in a new era for the franchise.

In Skiles' first year with O'Neal, he was able to achieve new career-highs in field goal percentage (46.7%) and assists (9.4). Seems rather logical, really - with O'Neal's presence, it's no surprise that Skiles' shooting and passing improved. It helped to have a big man that could draw attention and that could score at will. Granted, it also benefitted that Skiles played the most minutes in his career in 1993 (39.6) than in 1992 (31.7), but still. O'Neal's presence had an effect, and that's all that matters.

Skiles' role with the team remain unchanged with O'Neal's arrival in 1993, but the same wouldn't be the case with Hardaway's arrival in 1994. With Hardaway on board, it was clear that Skiles' days with the Magic were numbered. Orlando had drafted Hardaway with the full intention of making him the point guard of the future, but the team needed Skiles to groom the rookie before making a permanent switch. As such, Skiles mentored Hardaway for the first half of the 1993-1994 regular season. After that, Skiles returned to the bench, Hardaway started at the point, and that was that.

Once the year was over, Skiles was traded to the Washington Bullets and in 1996, he retired.

Skiles will probably never be remembered for any team success with Orlando, because quite frankly, there wasn't much of it during his tenure (no playoff wins). But Skiles surely will be recognized for helping the Magic transition to the Penny and Shaq era. Scott Skiles was a key stepping stone-type player for the city and for the Orlando Magic.

Credit goes to Neil Paine of Basketball-Reference for the statistical plus/minus data. 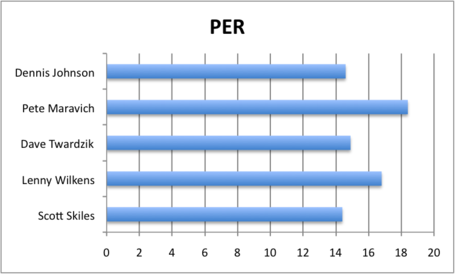 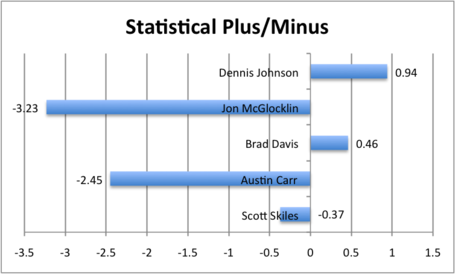 Historically, Scott Skiles was a more efficient player than Nick Anderson and Darrell Armstrong, when looking at the stats. During his five-year tenure with the Orlando, Skiles posted Offensive Ratings of 112, 114, 106, 115, and 111 - all numbers except for the median were above-average compared to the rest of the NBA. What fueled Skiles' efficiency? Good three point shooting and excellent free throw shooting, for the most part.

Although Skiles was never known as a star of any sort, his numbers do compare somewhat favorably to other players in the NBA that have had their jerseys retired. This is not to suggest Skiles should be honored by getting his numbers hanging in the rafters, but at the very least, he warrants being considered because he experienced the best years of his career with the Magic. For a person and player like Skiles, it seems only fair and just.

Skiles hasn't been able to do much in the Central Florida community, but that's by no means a slight on the city. Skiles has just been a little busy coaching, mostly in the NBA, which he's been doing since he retired as a player in 1996. The Orlando Magic thought enough of Skiles that the organization honored him in 2006 with a tribute to his time spent with the team. Although Skiles was unable to attend the proceedings, he was more than grateful for being recognized by the franchise.

"It’s not that I’m not grateful but I have a game that night," Skiles said. "It’s a little different than say me flying into (his alma mater) Michigan State to be honored for something. I have a game that looks like right now that we’re going to need to win (to qualify for the playoffs)."

- People have wondered whether or not a player in today's NBA has a chance to break Skiles' single-game assist record; one thing is for sure, it'll be tough. What aided Skiles in his ability to snag 30 assists against the Denver Nuggets in late 1990 was the the fact that the Nuggets a.) played absolutely no defense (last in the Association in defensive efficiency; surrendered 114.7 points per 100 possessions) and b.) played at a ridiculously fast pace (first in the Association in pace; totaled 113.7 possessions per 48 minutes). To put the latter number in perspective, last season the Golden State Warriors led the NBA in pace with 98.2 possessions per 48 minutes. Even the Phoenix Suns, during Mike D'Antoni's 'Seven Seconds or Less' era, didn't play at that frenetic of a tempo. Scott Skiles had a perfect storm scenario against Denver in a league that played at a much faster pace back then.

- Skiles was remembered, historically, for his point guard play but when looking at the numbers, did you know that he finished in the top ten in different assist categories (assists per game, assist percentage, and total assists) just twice in his career? People may have guessed it'd be more, but that's not the case. The reason for that is due to a factor that has been already mentioned; the Association played at a much faster back back then, which increased assist totals across the board. The average pace factor in 1991 was 97.8 possessions. The average pace factor in 2009 was 91.7 possessions. Big difference. If Skiles averaged 7.3 assists per game and had a 34.4 AST% like he did in 1992, he'd be in the top ten for each category in today's NBA somewhat easily. However, that wouldn't be the case in Skiles' era (and wasn't).

Most assists made in one game (30)

Most assists made in one game (30)