We've done a good bit of looking back at Orlando Magic history here at 3QC in recent weeks, what with Eddy's sprawling series on potential jersey-retirement candidates and all. Today, that retrospective trend continues with a broad survey of each team in Magic history, presented in map form.

Essentially, I wanted to use a visual method Tom Ziller (of Sactown Royalty and NBA FanHouse) devised to represent teams' tendencies, which involves advanced statistics and scatterplots. I'm not selling the concept well in that last sentence, but trust me, this stuff is cool. Here's Tom's original post, which he did for BallHype in August 2007, examining the NBA's 30 teams in the prior season. I consulted Basketball-Reference for statistics in this post.

And, to start us off, is a fairly simple visual which Ziller dubbed "The Map of Goodness and Badness." Click the link for a full-sized look. 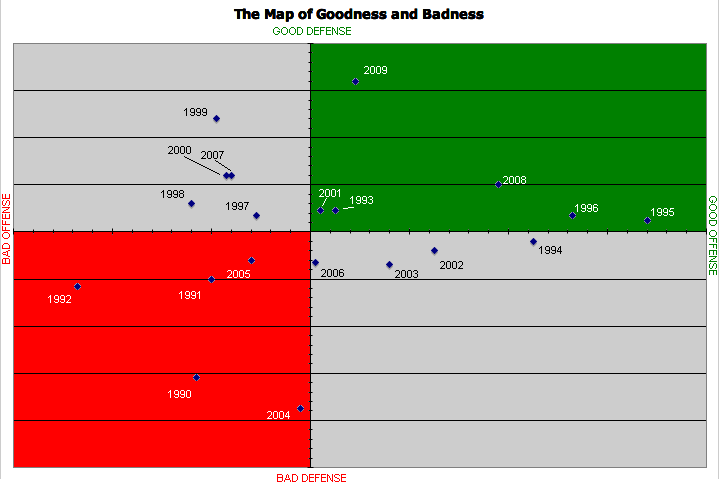 One of the things to take away from this graph is just how important Shaquille O'Neal was to this franchise. The Magic were dreadful on both sides of the ball when they drafted him. After one year, they moved to the positive side of the ledger, ranking above average in both offensive and defensive efficiency for the first time in franchise history. Now, that 1993 team was hardly dominant--look at how close it is to the center of the graph--but it represented the first decent squad in team history.

For another indication of Shaq's dominance, look at how woeful the 1992 team was, then note that Shaq anchored the most efficient offense in team history just 3 years later. He wasn't the only reason for the team's improvement--young Penny Hardaway was dynamite--but he certainly contributed to the franchise's rapid ascension. This chart illustrates the staggering progression better than anything else could.

Moving on to the team's other franchise center, Dwight Howard, we see that the 21-61 outfit in 2004 suffered mostly due to cosmically awful defense, yielding a league-worst 110.4 points per 100 possessions. The team has improved defensively, from worst in 2004 to best in 2009, in which he won the league's Defensive Player of the Year award. Consider that no other player in the Magic's usual starting five last season had proven himself to be an elite defender at the NBA level, and one gets a better appreciation for Howard's defensive ability.

Keep the following in mind when we look at another map later in this post: the 2009 Magic were barely above average on offense; indeed, it was their defense that carried them to the NBA Finals. Of the six teams which fall squarely in the first quadrant, only the Shaq-led 1993 unit, and the Tracy McGrady-led 2001 team, were less remarkable on offense.

Our next graph, "The Map of Awesome Speed and Apocalyptic Boredom," attempts to measure the "watchability" of a given team, assuming (rightly, I believe) that most people favor a faster-paced style of play. As in the previous graph, the x-axis measures offensive efficiency. What's different is that the y-axis now accounts for pace, rather than defensive efficiency. Teams in the first quadrant combine deft scoring with a fast pace, while teams in the third quadrant represent offensive ineptitude and a decidedly uncool lack of speed. 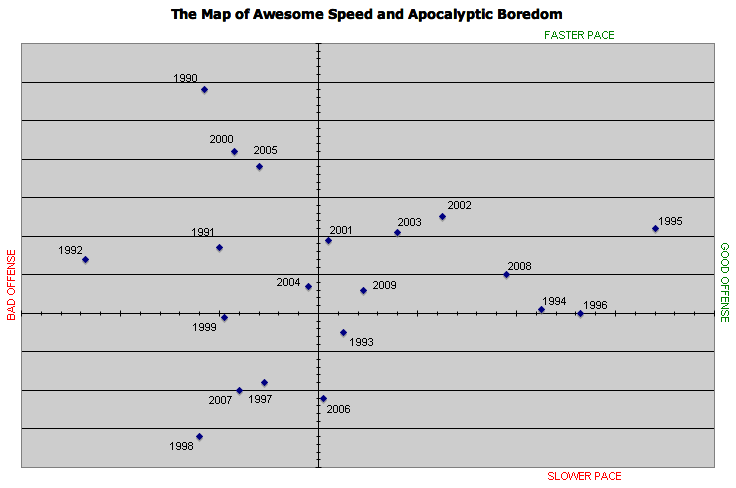 Fortunately for NBA fans, the Magic's two best and highest-profile teams (last year and the 95 squad) fall squarely in that first quadrant. Watching their games probably didn't feel like torture to most hoops addicts. Meanwhile, the expansion team in 1990 ran like the dickens, but wasn't too good at it.

The juxtaposition between the teams from Brian Hill's two stints coaching the Magic might be my favorite element of this graph, and we'll see a similar disconnect later. Hill's most successful teams--in 1994, 1995, and 1996--all played at a fast pace, and were reasonably efficient. Those tendencies changed in 1997, when a Hardaway-led revolt resulted in Hill's firing; note how the 1997 team is on the complete opposite end of the "fun" spectrum, neither running nor scoring.

When the Magic hired Hill again for the 2006 season, he did not change his stripes. He installed a slow, plodding offense built around Howard, then a sophomore. But unlike in the earlier years, with Shaq, Hill didn't have any lethal three-point shooters at his disposal. As a result, those teams played some stagnant, unbearable basketball (although they did at least show up on the defensive end).

Another thing to note here is how the four worst teams in franchise history--the ones appearing in the third quadrant in the first graph--also show up in a similar grouping here. They played at a fast pace, but didn't do much with it. Maybe there's something to that thesis, that less talented teams tend to play at a frenetic pace. Hmm.

We now move on to our next graph, entitled "The Map of Thugs and Hummingbirds." 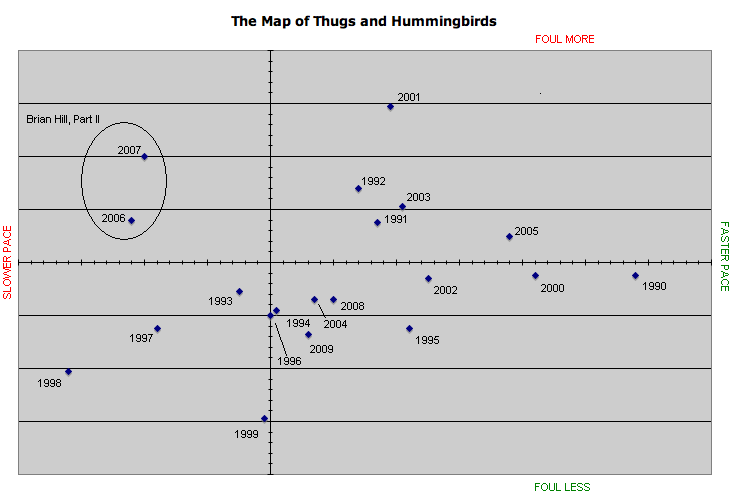 Here, we're measuring pace (on the x-axis) against foul rate (on the y-axis). Here's what Ziller wrote about the Magic in his original Mapping the NBA piece:

We could be subjected to the unwatchable Orlando Magic. Terrible offense, slow offense, foul a lot on defense. Three ingredients for ADHD suicides. Blame ironhands Dwight Howard and noodly-armed Darko Milicic, or keep blaming Brian Hill (see if I care). Something's got be done, and I imagine Rashard Lewis is that something: He doesn't care enough about defense to bother fouling, and he's never been one to let the shot clock wind down before making his move. Sleep well tonight Florida, fun is on its way.

He was dead-on, no? As I've indicated on the graph, Brian Hill helmed the only slow-paced Magic teams that also fouled at a high rate. And again, we see how drastically different current coach Stan Van Gundy is from Hill. Despite playing at a faster pace than Hill's teams did, Van Gundy's teams foul less. A cynic might attribute that fact to Howard's ascension to superstardom earning him more respect with the officials; I tend to believe Van Gundy's simply a better defensive coach.

Finally, we come to "The Map of Riflemen and Roughnecks," which illustrates teams' tendency to draw fouls (on the x-axis) against its tendency to shoot three-pointers (on the y-axis). Given the Magic's record-setting season shooting the three-ball last year, this graph will no doubt be of particular interest. 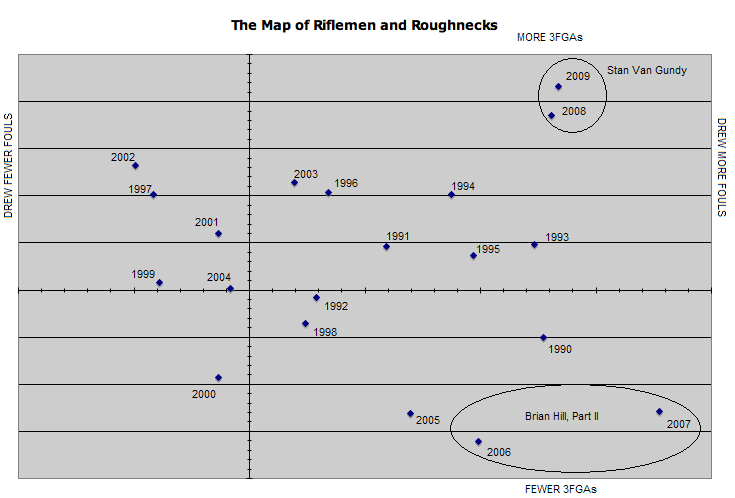 Yup, another stark contrast between Hill and Van Gundy. Since Stan took over, the Magic have shot more treys than ever, while still drawing fouls at a high rate (due in no small part to Howard's leading the league in free-throw attempts). Now I don't mean to pile on Hill here--he didn't have Rashard Lewis, the league's leader in three-point attempts, at his disposal--but this graph clearly shows how Van Gundy's been able to maximize Howard's talents. Dwight draws fouls at a high rate, scores 20 points per game, and spreads the floor enough for the Magic's three-point marksmen to fire away. Hill only got the foul-drawing part right.

To be fair to Hill, the first time he had a dominant center, he also had the likes of Dennis Scott and Nick Anderson to launch bombs; the 1994, 1995, and 1996 teams appear in the same quadrant as do Van Gundy's teams, albeit not as conspicuously. What is conspicuous, however, is the sharp decline in fouls drawn in 1997. It all fits in with the pattern of the team's style of play changing in that season, which (perhaps not coincidentally) marked the end of Hill's first stint with Orlando.

Another note on Van Gundy: for all the tricks the Magic have, what with the league's most prolific free-throw shooter and three-point shooter starting together on the same front line, neither of his teams has really distinguished itself offensively. The 2009 crew, for instance, was just 0.9 points per 100 possessions better than league average. However, that mark should change for the better this season, as the efficient Vince Carter enters the fold, replacing the inefficient Hedo Turkoglu. This roster might be the most loaded ("stacked" is how Kelly Dwyer put it) in team history, and we'll get to see if Van Gundy can ratchet up the offensive firepower without losing too much on the other end of the floor. Which is, as I've said, where the Magic really made their mark last season.

And how about that 1990 team? We saw earlier it played quickly but inefficiently, which would lead us to believe it'd be a fun-and-gun, three-point-shooting unit. Not so, at all. Indeed, Lewis attempted 162 more three-pointers last season than the entire Magic team did in 1990. Put another way, the 1990 team's leading three-point shooter (Scott Skiles, with 52 makes) would have tied Anthony Johnson for 7th on last year's team. If those facts don't indicate how important the three-point shot is in today's game, I'm not sure what does.

On this note, we conclude our graphical tour of the Magic's franchise history, which reveals not a few patterns about certain coaches' and players' respective impacts on the team. Incidentally, our backward-looking trend continues later today as Eddy examines the merits of the Magic potentially retiring Skiles' uniform number. Stay tuned.