For roughly a week's worth of time, I analyzed the worthiness of four former Orlando Magic players to see if one of them deserved to have their jersey retired. I examined their impact on the court and off the court to decipher whether or not there was an individual that possessed the "complete" package to be honored - a.) having comparable numbers to other players in the NBA that have their numbers hanging in the rafters and b.) having impacts in the Central Florida community.

To supplement the posts, I included polls to figure out what people thought of each individual.

Here are the results, so far: 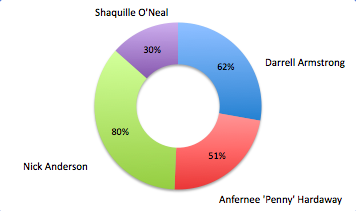 It's clear, when looking at the poll figures, that fans believe Nick Anderson is a former Magic player that most deserves to have his jersey retired by Orlando.

Darrell Armstrong received slightly favorable support, Anfernee 'Penny' Hardaway was in the middle of the pack, and Shaquille O'Neal received heavily unfavorable support. None of these results should be too surprising for those that follow the Magic, given that they fall in line with the feelings and perceptions of each player.

I wanted to conduct one last exercise in this mini-series before concluding things, and that was to utilize Benjamin Golliver's jersey retirement formula from Blazersedge & figure out how each former Orlando individual fared in the calculations.

Ben performed a number-crunch for Nick Anderson so I went ahead and tallied up the data for Darrell Armstrong, Anfernee 'Penny' Hardaway, and Shaquille O'Neal.

The majority of the calculations are no-brainers but in cases where awarding points isn't clear, I attached notes to explain my reasoning. If you're antsy or impatient [!!], feel free to skip to the bottom to see the point totals.

Notes: Cutoff for "eligibility" is in the 15-17 range on the scale.

The total points awarded to each individual pass the eye test.

Even though Hardaway did leave Orlando on shaky ground, the amount of collateral damage he caused doesn't quite compare to O'Neal's handiwork. As for Armstrong, his intangibles, which were excellent, make up for his numbers, which were good but not great. It can be argued that Armstrong is, at best, a "fringe" candidate to have his jersey retired by the Orlando Magic. As for Hardaway and O'Neal, it'd be a no-brainer to honor both players by hanging their numbers in the arena rafters if it wasn't for the fact that both players burned bridges on their way out of the City Beautiful.

Between the two, Hardaway probably has the better chance of possibly getting his number retired since he hasn't - ahem - said almost anything derogatory or negative towards Orlando since he was traded four scores and seven years ago 10 years ago. Heck, former Magic rookie Courtney Lee even went out of his way to honor Hardaway by donning Air Penny's during the 2009 NBA Finals against the Los Angeles Lakers. That should count for something, right?

"So you're telling me there's a chance."