"Why did I end up on the [Los Angeles] Lakers? Actually, in the summer of 1996, [former Orlando Magic general manager] John Gabriel sealed me going to L.A. Like I said, I was the highest-paid player on the team until Penny [Hardaway] signed his deal. I was happy for Penny. Figured my payday was around the corner. Then Gabriel said, "We can't give you more than Penny. We don't want to upset Penny."

Orlando offered me $69 million over seven years. Jerry West, the Lakers president, was talking $98 million. He was cutting guys left and right to make room for my salary. After I heard Alonzo Mourning was getting $110 million, my leverage was increasing by the day. When the Magic found out what the Lakers could do, then they tried to come back. [...]

And the truth is, I really had no intention of going there until the games with Orlando started."

It's only fitting that the final part of this mini-series ends with Shaquille O'Neal, undisputedly the most controversial player to play for the Orlando Magic franchise.

Let's start with the good.

When O'Neal arrived to the city of Orlando from Louisiana State University during the summer of 1992, the organization's fortune changed forever. The Magic, after three years of playing the role of being the NBA's doormat, transformed into a league powerhouse nearly overnight. With O'Neal, Orlando had a clear, identifiable superstar to promote its city and its franchise. Likewise, the league was on notice.

O'Neal came to dominate, and dominate he did.

Before there was such a thing as a YouTube sensation, the hype level of a player rose via highlights on the local or national sports channel and via word of mouth. People marveled at the rare combination of athleticism and strength that O'Neal displayed on the court in his rookie season. As such, O'Neal's legend quickly grew and popularity quickly skyrocketed when he dismantled not one, but TWO basketball hoops (the NBA was forced to build "Shaq-proof" baskets, as a result).

Here's another example of O'Neal doin' work in his second season with the Magic.

If scoring 53 points (a career-high in O'Neal's career, at that point) during the 1993-1994 regular season doesn't make you say 'wow,' then maybe blocking 15 shots does make you say 'wow' because that's what O'Neal did in the same year against the New Jersey Nets. Want to know the complete stat-line of that game?

O'Neal continued to dominate in his third season by leading the NBA in points per game (29.3) - the first time a player from Orlando accomplished such a feat. Unfortunately for O'Neal, it wasn't all roses that year as he was outclassed against Hakeem Olajuwon in the 1995 NBA Finals, a series where the Magic were swept.

Shaquille O'Neal, via Shaq Talks Back:

I don't know if we could have won [the series] because we really got caught up in just being there, and didn't concentrate enough on winning. That was partly my fault. One of the reasons we lost is because I respected Hakeem [Olajuwon] too much. Wasn't bowing him, wasn't fouling him, wasn't talking my usual smack. I was just being nice, respecting my elder. Whenever I hit him, I'd ask him, "You OK, Hakeem?"

Hakeem never said anything. He just took the pounding and came back at you. He'd go into a herky-jerky move. You'd be over here, he'd be over there, shooting a fade-away jumper. When he had that Dream Shake going, it was lights out, buddy.

In O'Neal's fourth and final season with Orlando, the big fella had to deal with a thumb injury that sidelined him for a portion of the beginning of the regular season. O'Neal eventually returned and helped guide the Magic to the team's one and only 60-win season. The year didn't end on a high note, though, as the Chicago Bulls (fielding, arguably, the best team ever) romped Orlando in the 1996 Eastern Conference Finals. I believe the quote is, "revenge is a dish best served cold."

Once the summer hit, all eyes were on the Orlando Magic and Shaquille O'Neal, as the organization & the player reached a crossroads that would change the direction of the franchise, forever. The details of that saga will be addressed in a minute.

I turned to Benjamin Golliver's "formula" made in a write-up over a year ago at the superb Blazersedge to ascertain whether O'Neal deserved an analytical and a statistical breakdown. After I noted that O'Neal met a majority of the criterion listed in Ben's post (for example, O'Neal was a superstar on the 1995 NBA Finals team for the Magic), I surmised that he deserved an examination.

As I've stated in my my previous posts, I enlisted the help of Jon Nichols of Basketball-Statistics and, also, Kevin Pelton of Basketball Prospectus to a.) add an APBRmetrician's unbiased perspective and b.) provide statistical data.

If we are indeed ignoring tenure with the team, Shaquille O’Neal should be a lock to have his jersey retired by the Magic. In his four seasons in Orlando, he posted numbers that rivaled his career best. Like Maravich, Walton, and Barkley, he will be a Hall of Famer. Although the feelings in Orlando towards Shaq are not always positive, there’s no doubt that his contributions during his four years were enormous.

Shaq's career PER of 26.9 is among the highest in the history of the NBA. Not only has he been efficient (career Offensive Rating of 113 despite his free throw shooting woes), but he has never been shy of carrying the workload (his career usage rate is only slightly below 30%). His career Defensive Rating of 101 is impressive, as well. Although his best years may have come in L.A., his performance wasn't that much worse in his first few seasons in Orlando. In fact, his two most efficient offensive seasons came in his second and third seasons with the Magic. The only thing keeping his PER's from being career highs those two seasons was the fact that his deft passing ability was not out in full force yet.

Of course, you really don't need all of those numbers to know the Magic should have his jersey retired. Simply put, O'Neal made the Magic matter as soon as they drafted him. Had it not been for some great Rockets and Bulls teams, the Magic could be holding two Finals championships in their trophy case.

Credit goes to Nichols for the PER graph and Pelton for the WARP data. 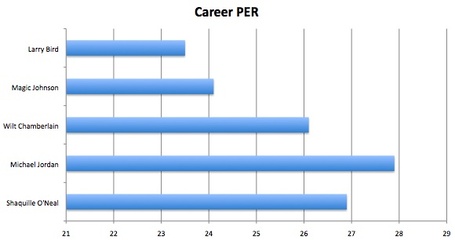 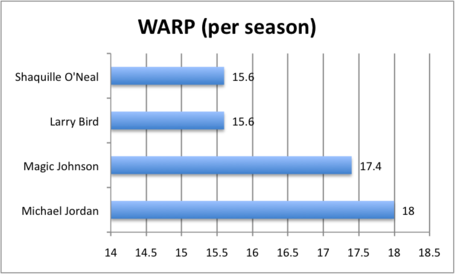 This is a prime example where the numbers speak for themselves.

Although Nichols brings up valid points in his assessment of O'Neal, "should be retired" and "will be retired" are two completely different things. There's no argument that O'Neal is or isn't worthy of having his number hang in the rafters - he is. But harkening back to the summer of 1996.

Rather than rehash the same material that has been written over, and over, and over again (usually from the media), I'll refer you to pages 44-48 of O'Neal's book, Shaq Talks Back, for his take on the sequence of events that lead to his departure (I strongly suggest reading what he had to say).

O'Neal is not excused for his behavior before he left and his comment about Orlando - "a dried-up pond" - helped further develop friction between the city, the media, the player, and the team. It was an ugly divorce, to be sure, but it's worth figuring out what created the messy breakup in the first place. Clearly, everyone involved in the situation is to be blamed. O'Neal felt betrayed, so he lashed out ...

... and continues to lash out on the Magic organization to this day. It should be stated that O'Neal does like to talk, so who knows whether the things he says is fodder or not, but it doesn't change the fact that he has said spiteful words towards Dwight Howard ("a good player, but everything he's done, I've invented") and Stan Van Gundy ("a master of panic").

Despite everything, O'Neal has maintained residence in Orlando and has organized events within the city, such as the Sixth Annual Shaq's Mama Said Knock You Out fundraising event, which takes place next month. O'Neal has remained a presence within the Central Florida community, even during his time with the Lakers, Heat, Suns, and now, Cavaliers.

O'Neal, also, will forever remain a part of the Orlando Magic's history, but it appears he'll be no more than a footnote. A shame, really. O'Neal will go down as one of the most dominant players to ever set foot in the NBA, and normally, greatness deserves to be honored and recognized, but that may never be the case with O'Neal and the Magic.

It is what it Is.