Let's just get this out of the way, right now.

If there is one player in the history of the Orlando Magic franchise that is a near-unanimous choice to have his jersey retired by the organization, it's Nick Anderson.

Anderson is beloved by the community, by the fans, by the team, etc.

Owner of a multitude of franchise records.

A community ambassador, a local legend, a playoff hero.

Let's also just get this out of the way, right now. Nick Anderson, when debating the merits of whether or not he deserves to have his number hang in the rafters, should NOT be penalized for the infamous four missed free-throws in Game 1 of the 1995 NBA Finals. It's no different than when Courtney Lee was unfairly criticized for missing a difficult game-winning layup in Game 2 of the 2009 NBA Finals. In both instances, those plays weren't THE reason for the losses. In both instances, the Magic still had a chance to win either game in overtime against either opponent. They were A reason for the losses, and certainly costly but that's it. It should be stated that the plays aren't being compared, but the moments themselves. Moving on.

Nick is easily best known for arguably the greatest moment in franchise history.

Nick Anderson, via the Orlando Magic:

The Bulls inbounded at their baseline and Jordan got past me, bringing the ball upcourt under pressure. I was pursuing the ball down the floor, figuring that Jordan had made so many last-second shots he was just going to pound the ball all the way to the rim. But he didn't, which allowed me to catch up and move into a blind spot behind him.

Jordan turned to look over his left shoulder, but I was on his right. I poked the ball away from MJ. Penny gathered it after it sprung loose and passed ahead to a streaking Grant, who dunked to give us a one-point lead with six seconds remaining.

[...] I give a lot of credit to our fans. They were so loud that even though the other Bulls were yelling at Jordan that I was swooping down on him, he couldn't hear their warnings.

Anderson certainly had his ups and downs with Orlando, seemingly magnified during the 1994-1995 postseason - starting with the series against the Chicago Bulls and ending with the series against the Houston Rockets. Due to Anderson's misfortune at the charity stripe in the championship series, his statistical production declined precipitously until everything bottomed out during the 1996-1997 regular season. Anderson's fall from grace was accentuated from the free-throw line, where it became a struggle mentally (saw a sports psychiatrist) and statistically (shot 40.4% for the year). One wondered if Anderson could ever bounce back as a player.

But Anderson did, and there's one game that stands out.

Beginning at the end of January of 1998, Anderson's career rebooted, so to speak. Anderson's "off" switch turned "on" and he began to play like himself again. Finally.

Then February 22nd came, which meant one thing.

The return of Shaquille O'Neal to Orlando since he left for Los Angeles in 1996. As expected, it was an emotional event for all parties involved. Before a nationally-televised audience, Anderson cemented his return by scoring 30 points and hitting a game-winning three with 7.1 seconds left to catapult the Magic to a victory.

With Anderson, he always had his fair share of memories during his time with Orlando.

The following, above, were just a few examples.

I turned to Benjamin Golliver's "formula" made in a write-up over a year ago at the superb Blazersedge to ascertain whether Anderson deserved an analytical and a statistical breakdown. After I noted that Andersn met a majority of the criterion listed in Ben's post (for example, Anderson was the Magic's first-ever draft pick & was a role player on the 1995 NBA Finals team), I surmised that he deserved an examination.

As I stated in my post yesterday, I enlisted the help of Jon Nichols of Basketball-Statistics and Neil Paine of Basketball-Reference to a.) add an APBRmetrician's unbiased perspective and b.) provide statistical data.

His PER numbers were very similar to those of Darrell Armstrong, although he was a bit more efficient. In the two seasons from 1994-96, he posted impressive Offensive Ratings of 119 and 112, thanks to his excellent three-point shooting. Like Armstrong, Anderson had a relatively long tenure with the Magic and was involved with a number of winning teams.

The same statistical comparisons that I used for Armstrong apply for Anderson. These guys were solid role players that played a lot of years for their team but were never spectacular. Also like Armstrong, Anderson did not finish his career with the Magic, which usually goes a long way toward a player getting his jersey retired. Statistically, he definitely is no lock for getting his jersey retired. However, he did not face serious legal trouble and now works for the Magic’s front office. There are enough positive feelings associated with him and he plays a prominent enough roll in Orlando to be a reasonable candidate. 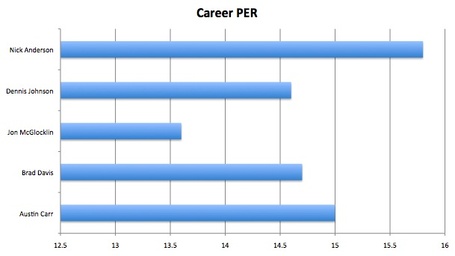 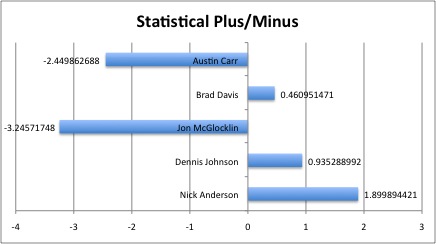 Here's another statistical nugget, via Basketbawful:

He's the only player in NBA history to score 50 points in a game off the bench. It happened on April 23, 1993. On a night in which Shaq busted his second backboard of the season, Nick exploded out of his warmups to shoot 17-for-25 from the field, 4-for-7 from distance and a perfect 12-for-12 from the charity stripe. Mind you, he scored that 50 points in only 33 minutes. That's one freaky efficient performance. And the Magic won 119-116. Shaq had only 10 points on 3-for-11 shooting and nearly fouled out. Orlando's second-best player that night was Scott Skiles (19 points, 9 assists and only one fewer rebound than Shaq). Bernard King had his best game of the season for the Nets (24 points, 10-for-16) and would play only four more games before retiring.

What else needs to be said?

As was stated in the beginning of the write-up, Anderson had the numbers AND the intangibles. Anderson has remained a part of the Central Florida community and has served as the Community Ambassador for the Orlando Magic since 2006, hanging around the Amway Arena during games and making various appearances for team events.

Anderson was the first-ever draft pick for the Magic in 1989.

Anderson was the first person to be recognized during the Magic's "Committment To the Past Nights" in 2006.

Anderson was the first player to have his jersey retired by the Magic in ???

The last sentence is what every Orlando fan is waiting for.