To this day, that nickname still resonates in the sports world. More often than not, almost any casual fan of basketball immediately knows who Penny is. Almost any.

For Orlando Magic fans, Anfernee 'Penny' Hardaway represented three things - what he was (a great player), what he is (a retired player), and what he will be (a distant memory?). There are so many superlatives to describe Hardaway's career.

Hardaway was a supernova; his career exploded so brightly and quickly.

Hardaway was a tragic hero; abandoned by Shaquille O'Neal at the apex of their reign in 1996, he infamously executed a coup d'état against Brian Hill in 1997 (among other things), and in almost karmic nature, paid the price for the mutiny by suffering a career-changing & serious knee injury in 1998, which required micro-fracture surgery. Unfortunately for Hardaway, that type of procedure was handled during its infancy. Treated as a 6-to-8 week ordeal, Hardaway was rushed back onto the parquet floor. And unfortunately for Hardaway, he was never the same player again. Ever.

What type of player was Hardaway, in his prime?

Via Ric Bucher of ESPN.com:

Long forgotten is the All-NBA first-teamer considered a lock-solid franchise cornerstone as a 6-foot-7 point guard with a tight handle, extraordinary court vision and a high basketball IQ who's fearless about taking the big shot but not hesitant to find an open teammate.

Hardaway was seen by many as the next Magic Johnson, the next prodigy, the next revolutionary point guard that would take the NBA by storm. For a few years, Hardaway was the player as described. Perhaps the zenith of Hardaway's skill displayed itself against the Miami Heat in the first round of the 1997 NBA Playoffs. Although Orlando lost the series against Miami in five games, Hardaway choreographed two dominant, historic, ridiculous performances (against a Pat Riley-coached team, no less) that showcased how special a player he was early in his career. On the court, no one denied Hardaway's greatness. Off the court, well ...

... that will be addressed in a minute.

I turned to Benjamin Golliver's "formula" made in a write-up over a year ago at the superb Blazersedge to ascertain whether Hardaway deserved an analytical and a statistical breakdown. After I noted that Hardaway met a majority of the criterion listed in Ben's post (for example, Hardaway was a superstar on the 1995 NBA Finals team for the Magic), I surmised that he deserved an examination.

As I stated in my post yesterday, I enlisted the help of Jon Nichols of Basketball-Statistics and Neil Paine of Basketball-Reference to a.) add an APBRmetrician's unbiased perspective and b.) provide statistical data.

In his first four years with the Magic, he was spectacular. He posted PER’s of 17.4, 20.8, 24.6, and 21.4. He appeared on two All-NBA First Teams, one All-NBA Third Team, and an All-Rookie Team. He also appeared in four all-star games and was among the league leaders in a number of categories for a brief period. Of course, as the story goes, he was injury-plagued and inconsistent for the rest of his career.

Are there other players who had spectacular but short tenures and still had their jerseys retired? Of course. Earl Monroe played just four seasons with the Bullets, Pete Maravich played five with the Jazz, Bill Walton played four with the Blazers, Charles Barkley played four with the Suns, and so on. Of course, a lot of these guys had Hall of Fame careers with other teams, but for the teams in question, they were just short and sweet. The Sacramento Kings, who are not afraid to retire jerseys, honored Vlade Divac despite him only playing five solid seasons there.

Hardaway’s career will always be remembered with disappointment. However, he was involved with some of the greatest Magic teams ever, and even though his stardom was short-lived, it was dramatic. Hardaway should have his jersey retired.

As was noted before, there is precedent for a player of Hardaway caliber to have a short & sweet career with a particular team and have his jersey retired by that respective franchise. Statistically, Hardaway's numbers are impressive when comparing and looking at them side-by-side with four Hall of Fame players from different NBA eras. It was brought up yesterday and it's worth mentioning again - it's not advisable to compare the PER's of individuals that play different positions, but this will be an exception for the purposes of this exercise. 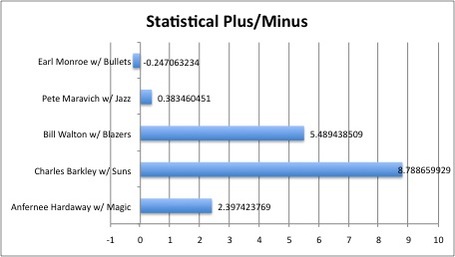 There's no doubt that from a numbers standpoint, Hardaway deserves to have his jersey retired by Orlando because he was an elite player and a superstar. But, of course, it's not all about stats and this is where Hardaway falls short.

Via George Diaz of the Orlando Sentinel:

The slice-and-dice is Penny's signature move, one that will define his legacy with the Magic. The DNA evidence is irrefutable: His handprints are on the knife he used to bloody Coach Brian Hill, undercut teammate Nick Anderson and stab elderly Chuck Daly into retirement.

The Magic did the right thing by severing ties with Hardaway, an unsightly cancerous growth in the locker room and this community.

It is a contentious divorce, the end of one party's exhaustive pleas for a reconciliation. Hardaway would have none of it, and certainly will absolve himself of any culpability.

Certainly, both Hardaway and the organization have matured since then and time has allowed for old wounds to heal on both ends of the table. Whether or not old wounds HAVE healed is the question that is yet to have an answer.

Hardaway has the accolades and the statistics, but he doesn't have the intangibles. Hardaway hasn't contributed to the Central Florida community or has made an investment in the organization in a while. In return, Orlando has yet to honor Hardaway in any capacity since he stopped playing professional ball. For Hardaway, that may never change.

No one can forget the Lil' Penny commercials and the Air Penny shoes, each classic in every sense of the word.

No one can forget LeBron James, arguably the best player in the NBA right now, reference Penny as one of his favorite players.

No one can forget the good and the bad with Anfernee 'Penny' Hardaway; he represented his number perfectly (#1).

One of a kind (pun intended).