If Orlando Magic fans had to choose one player that epitomized and exemplified the 'Heart and Hustle' era for the franchise, the individual chosen would probably be Darrell Armstrong. Known for his energy, grit, and intensity, Armstrong endeared himself to his peers in the NBA & the local fans for always giving his all and exciting crowds with his dunking ability, despite his small stature (6'0''). As such, Darrell is probably most famous for a few things, like accidentally making a layup in the 1996 NBA Dunk Contest and stealing a game (figuratively & literally) away from the Philadelphia 76ers in the closing seconds (3.3, to be exact) of a game in 1999.

Armstrong was a perfect underdog to root for - he attended and played college ball at a small school (Fayetteville State University), didn't get drafted by an NBA team, was forced to play in the GBA (Global Basketball Association), in the USBL (United States Basketball League), and in Europe before being signed by Orlando as a free agent during the 1994-1995 season. Even then, Armstrong didn't see significant playing time with the Magic until the 1997-1998 season.

Talk about paying your dues, right?

I turned to Benjamin Golliver's "formula" made in a write-up over a year ago at the superb Blazersedge to ascertain whether Armstrong deserved an analytical and a statistical breakdown. After I noted that Armstrong met a majority of the criterion listed in Ben's post (for example, Armstrong played the majority of his career and his most important years with the team), I surmised that he deserved an examination.

As I stated in my preview yesterday, I enlisted the help of Jon Nichols of Basketball-Statistics and Neil Paine of Basketball-Reference to a.) add an APBRmetrician's unbiased perspective and b.) provide statistical data.

During his nine seasons with the Magic, they never finished with a losing record. Statistically, he was solid but not superb. He was never particularly efficient (excluding his very short 1994-95 appearance, his single season career high in Offensive Rating was 112). However, he produced enough (usage rates hovering around 20) to post solid PER’s. Hs best seasons came from 1998-2001, when he posted PER’s of 22.2, 19.5, and 18.6. However, none of these statistics really reflect his strong defensive ability.

Statistically, there are other players who have had their jerseys retired who have posted numbers similar to Armstrong’s. Austin Carr played nine seasons with the Cavaliers and posted numbers at a level below Armstrong. However, he was known as "Mr. Cavalier," works in the Cleveland front office, is the team’s color commentator, and was a college superstar. Clearly his jersey was retired for reasons beyond his on-court production.

Brad Davis had similar numbers in 12 years with the Dallas Mavericks and had his jersey retired. However, he too works for his team’s front office and is a television personality. Ditto for John McGlocklin of the Milwaukee Bucks. Finally, we have Dennis Johnson, who posted regular season numbers inferior to those of Armstrong. However, he won multiple championships with the Celtics and even won a Finals MVP Award once.

So to sum up Armstrong’s situation: his numbers are on par with the lower level of players who have had their jerseys retired. However, he has two factors working against him: he did not finish his career with the Magic nor does he still hold a position in the team’s front office. It doesn’t help that his Magic career ended around the time he was charged with resisting arrest and assaulting a police officer. Also, you could probably find other players with numbers like his that never had their jerseys retired. It all comes down to how much he means to the Magic franchise: was he just a pretty good player or did he mean something more? I’d probably vote against retiring his jersey.

As a rule of thumb, it's best to compare PER's of players who play the same position and/or compare PER's of the same individual over a span of a few seasons because issues do arise in other situations where comparisons are being made. In this case, the only glaring problem comparing these crop of guards is that blocks and steals weren't an official NBA statistic until the 1973-1974 season, which skews Jon McGlocklin's career PER. Nevertheless, Armstrong's career PER and career statistical plus/minus compare favorably to other guards that have had their jerseys retired. In fact, Armstrong fares best among the quintet in two separate linear metrics. It'd be great to use more advanced statistics to see how Armstrong lines up among his peers, but limitations in retrieving that data is a problem.

With that being said, some of the numbers DO speak for themselves. 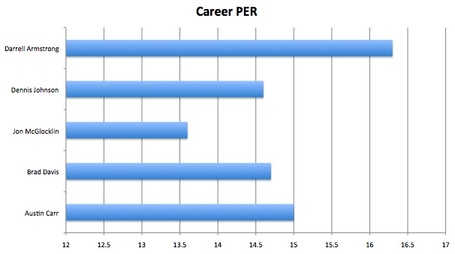 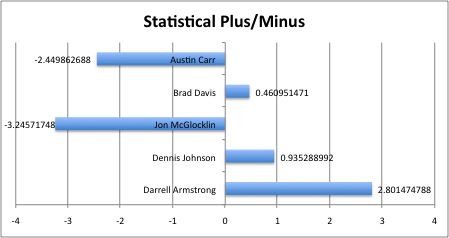 Armstrong didn't end his career with Orlando on a high note as was pointed out, but it's clear that he means something more to the city and to the franchise.

Off the court, Armstrong continues to make an impact in the Central Florida community (for example, the Darrell Armstrong and Chucky Atkins, 2009 11th Annual Basketball Camps & the 10th Annual Darrell Armstrong Classic Weekend) and remains a favorite with Magic fans. On the court, Armstrong bridged the gap between the Shaquille O'Neal era and the Dwight Howard era, played alongside a pair of #1's (Anfernee Hardaway and Tracy McGrady), and steered Orlando through many, many, many years of ups and downs.

Armstrong played the majority of his career and the most important years (in other words, his prime) with the Magic. Armstrong's teams weren't remember for being extremely successful, though, that's what happens when an individual is a product of his environment. Which is to say, it's not Armstrong's fault that Hardaway got traded, Hill was injured, and so on and so forth. When looking at Armstrong in a vacuum, his statistical body of work hovered between good & great during his tenure with Orlando and he was rewarded justly, when he became (and still remains) the only player in the history of the Association to win the Most Improved Player Award and Sixth Man Award in the same year (1999). Impressive.

Random thought. Remember when Tim Hardaway of the Denver Nuggets was ejected in the third quarter of a regular season home game in 2002 against the Orlando Magic and promptly threw a courtside monitor onto the court during his temper tantrum?

Who picked up the television and plugged it back in where it belonged?