A Tour of the Orlando Events Center Construction Site

Share All sharing options for: A Tour of the Orlando Events Center Construction Site 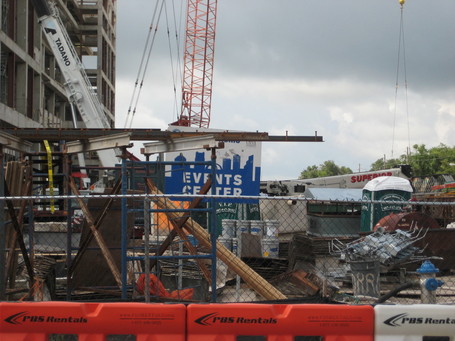 Thursday morning, the Orlando Magic conducted a tour of the construction site of the Orlando Events Center, their new arena, for the media. At 9:46 AM, Alex Martins, the team's Chief Operating Officer, rounded up the assembled media at the corner of Church Street and Garland Avenue and led them down Church toward Division Avenue and the construction entrance (pictured above). Martins was a study in contrasts, as he paired dress slacks and a collared shirt with well-worn work boots and a hard hat.

Make the jump to read about the tour, and for several photographs of the construction.

Martins reported that construction is moving along on schedule, although he expressed hope that a hurricane would not complicate the effort. He was quick to add that the schedule has enough flexibility built into it to allow for some adjustments in case of a hurricane. The Magic are slated to play their first-ever game there, a preseason contest, on October 10th, 2010. That date, 10-10-10, is going to look pretty great on a t-shirt, no?

So, what does "on-schedule" entail? Plumbing and electrical work has begun. The concrete superstructure is nearly finished, and construction of the steel superstructure will begin next week. Martins said he expects the arena to be fully enclosed by January 1st, after which point air conditioning will be installed.

The building's distinguishing feature will be a 120-foot tower at the corner of Church and Hughey, shown here from the parking garage across the street: 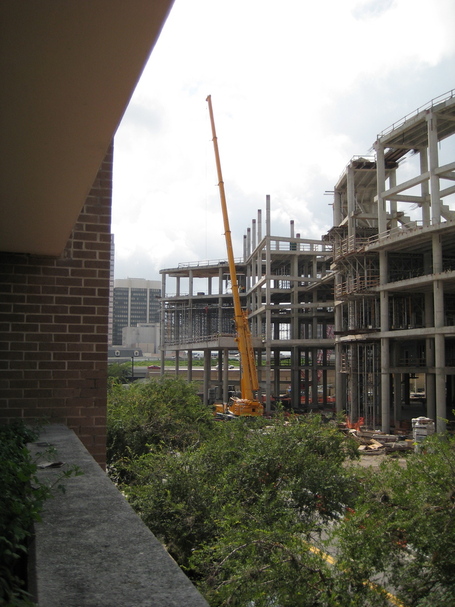 It may not look like much now, but eventually, it will resemble the big, blue, glass tower in this rendering. But it's not just for show. Indeed, the tower is where form and function really meet in this building. The ground floor will house an Orlando Magic retail store. Above that will sit a patio restaurant open to all fans, regardless of ticket price paid. Martins described the top of the tower, the "Skybar," as a place for fans that will have "a nightclub-like atmosphere." He concluded his explanation of the tower's features by saying that it's designed in such a way that it can operate 'round the clock regardless of whether the arena is hosting an event. And the tower's placement on Church Street helps integrate the arena into the downtown area, making it feel more like a part of the city than Amway Arena, their current home, does. It's not that Amway is far away, but rather that it feels like an afterthought because it is not proximal to the city center.

The Magic have done their homework in researching the features and amenities they want their new facility to have. Martins said they had visited every arena in North America--"even places like Calgary," where the NHL's Flames play--over the last decade to draw inspiration. It seems to me that this research will go to good use. The Orlando Events Center is nearly thrice the size of Amway, yet will seat a scant 1218 more spectators, or 18,500 total. How can this be? The extra square-footage in the Orlando Events Center is almost exclusively dedicated to making the experience of attending an event more comfortable. As Martins said, "the biggest reason for the change in size is for amenities."

In addition to the Skybar and the patio restaurant in the tower, the upper level of the Events Center will have a full-service restaurant--again, open to any paying spectator--that will overlook the floor (pictured below). Fans will be able to dine there and still have a clear view of the court. Also, the arena will have an area for kids to play, and even shoot hoops, a feature Martins said was inspired by the Phoenix Suns' current arena. 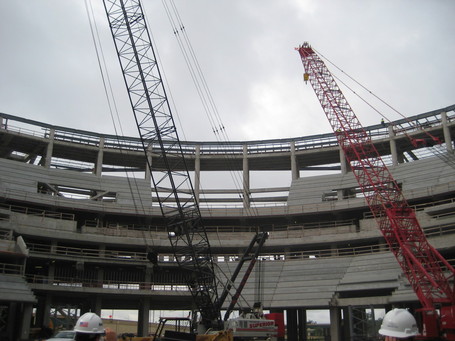 Some of the new space in the arena is dedicated to the Magic's basketball operations staff, which will move in from its current digs at Maitland's RDV SportsPlex.

Overall, I came away impressed with the arena, and await the opportunity to tour it again. Martins said it will be "the most modern, most technologically advanced, and best facility" in the entire NBA. And David Stern, the league's Commissioner, said of the arena, "It's going to be a real 'wow,'" after touring it in April. Based on what I saw today, those two men probably aren't far off in their assessments.