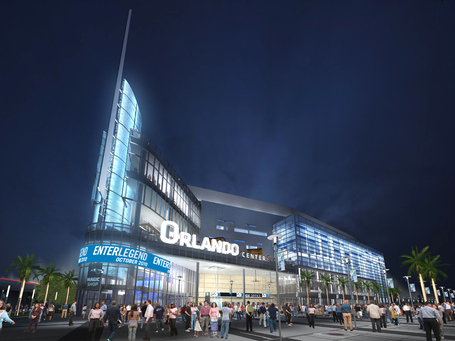 The days here at 3QC have been busy lately. Orlando Magic player evaluations, free agency news, trades, summer league... it's hectic. Not as focused as I'd like, perhaps. Ordinarily, I'd hate to throw another proverbial curve with this site's Magic coverage. But this is different.

Tomorrow, I'll take part in a media tour of the construction site of the Orlando Events Center, into which the Magic will move in 2010. Later on, I'll have a post about the experience. Until then, feast your eyes on the latest rendering of the arena, pictured above. And below the jump, a head-to-head comparison of Amway Arena--which the Magic have occupied since their inception--and the Orlando Events Center.