Today, I'm going to run the third and final part of my three-part series on a few Orlando Magic players and analyze their performances in the playoffs. I'm going to concentrate, mainly, on offense with my posts.

The third player I will examine is Dwight Howard.

Howard had an up-and-down postseason, as indicated by his elbows and by his numbers. In the first round against the Philadelphia 76ers, Howard had a field day. The first reason was because Philadelphia didn't have the players to stop Howard. The second reason was due to the Sixers making a concerted effort to allow Howard get his points, while neutralizing the other Magic players. The strategy worked, at first. In the games Howard scored a bevy of points, Philadelphia was able to win. When Orlando was able to get Turkoglu, Lewis, and others involved, it was a different story. Eventually, the latter of the two scenarios took hold in the series.

Howard's signature game against the Sixers was in Game 5. Controversy aside (when he elbowed Samuel Dalembert), Howard lived up to his potential and played a masterful performance with 24 points, 24 rebounds, and 2 blocks. Insane. Howard was punishing anyone and everyone in his way, even his own teammate Courtney Lee, who he injured in a play during the first quarter of the game. Oops.

Even though Howard only had 2 blocks in the aforementioned game, he made his presence felt by intimidating a variety of Philadelphia players from attacking the basket, penetrating the lane, etc. As a result, the Sixers were forced to shoot from the perimeter and the numbers weren't pretty (4 of 18 shooting, 22.2% from three). 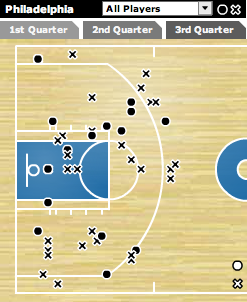 However, things were much different against the Boston Celtics in the Conference Semifinals. It's no secret that Kendrick Perkins is one of the few players in the NBA that can effectively handle Howard in the post and he proved his ability, yet again. Howard couldn't do the things he normally does against his opponent. Instead, Perkins used his size and strength to push Howard out of his comfort zone and sweet spots on the court, thus forcing him to take errant shots left and right.

The rest of the Magic players seemingly took notice of this trend and in the epic Game 5, in which Orlando collapsed late in the fourth quarter, Howard had 1 touch in the final 6:50 of the ballgame. As we all know, Howard took exception to the lack of involvement at the end of the game and let his thoughts known loud and clear in the post-game presser. After speaking with Magic general manager Otis Smith and head coach Stan Van Gundy, cooler heads prevailed heading into a vital Game 6.

For Orlando, it was simple. Win and live another day. Lose and go home.

Howard took the words of Smith and Van Gundy to heart and played an inspired Game 6 - netting 23 points, 22 rebounds, and 3 blocks. Howard was a man possessed on both ends of the court, finding different ways to contribute when the opportunity presented itself. Howard still struggled in the low block against Perkins and Boston, as a team, continued to defend the pick & roll well but he compensated by grabbing TEN offensive rebounds in the game. The only other time Howard did that in the playoffs was against Philadelphia in Game 5, not coincidentally, a game I pointed out earlier because of how he dominated from start to finish.

Howard's effort was key to extending the Boston series to seven games. In the final stanza, Howard's teammates picked up the slack and helped advance Orlando onto the Conference Finals against the Cleveland Cavaliers.

The talk around town and in the community was that if the Magic just got past the Celtics (widely accepted as a tough matchup for Orlando), then anything was possible against the Cavaliers. The Magic had every reason to be confident against the Cavs, as the team matched up extremely well against 'em and owned the head-to-head matchups the past two seasons. The table was set for an "upset."

I use the word "upset" loosely, as indicated by the quotation marks.

Leading the charge for Orlando would be Howard, who was salivating at the opportunity to face off against Zydrunas Ilgauskas, Anderson Varejao, and Ben Wallace. Heading into the series, everyone knew that Howard would be too athletic and too strong for the trio on offense. The question was, how would Cleveland head coach Mike Brown counter on defense? After allowing Howard to have his way in Game 1, Brown elected to hack-a-Dwight in hopes of forcing the big fella to beat his team from the free-throw line. For the Cavaliers, the strategy backfired.

Howard ended up shooting 70.1% from the charity stripe in the Conference Finals.

The only other thing that could stop Howard from constantly having his way against the Cavs was foul trouble, which did keep him out of the game for periods of time in Game 3. Fortunately for the Magic, it didn't matter because the team won the game.

With two major obstacles out of the way, Howard went to work the entire series, punishing Cleveland with the base 3/5 pick & roll set and the 4-out/1-in set. I've explained the former offensive play a few times in my posts about Turkoglu and Lewis, but I'll explain the latter offensive play for those that don't know. Here we go:

The 4-out/1-in set play is what you see Orlando run numerous times in games. It's been a staple of the Magic's offense since Shaquille O'Neal was in uniform during the mid-90's. It's a dump down to Howard and either he can proceed to post up his defender in the paint or he can kick it out to his teammates around the perimeter, etc. The end results of the play are endless. There's so many variations to the set.

Here's what I mean:

The deep positioning Howard was getting in the lane against the Cavs was in direct contrast to the type of looks he was looking at around or in the paint against the C's.

For all the success Howard had against the Cavaliers, it wouldn't be the same against the Lakers. Howard couldn't do much against Los Angeles because his opponent had the personnel with the length and strength to bother him on offense (7'0'' Andrew Bynum, 7'0'' Pau Gasol, 6'10'' Lamar Odom). The Lakers also did an excellent job of putting a hand on the ball or stripping it completely from Howard nearly every time he put the ball on the floor as he made a move in the post. This is something Howard will need to improve during the off-season; he needs to keep the ball high as he makes his move to the basket so that he doesn't turn it over. Likewise, Los Angeles buckled down defensively and defended the pick & roll well.

Because of these different factors, Howard regressed back to the play everyone saw against the Celtics. Howard was unable to make the type of impact that he did against the Sixers and Cavaliers. As such, Orlando wasn't able to beat the Lakers in the NBA Finals. As I said before, Los Angeles had the right personnel to stop not only Lewis, but Howard as well.

Despite a disappointing finish to the postseason for Dwight Howard, it's safe to say that he grew up considerably as a player, given the experiences he faced. People may criticize him for his free throws or turnovers in the NBA Finals, and rightfully so, but ultimately Howard did more good than bad in the playoffs. When the team needed him the most, Howard carried his coaches and teammates on his back.

If you're an Orlando Magic fan, this is only the beginning for Howard. He openly admits he has plenty of things to improve offensively and after a brief rest during the summer (heeding the advice of Bill Russell), Howard will go back to work to improve his game and hopefully, guide his team back to the promised land again.

Stay along for the ride.