Two weeks have passed since Game 1 of the NBA Finals between the Los Angeles Lakers and the Orlando Magic, in which point guard Jameer Nelson infamously returned to the Magic's lineup--as a reserve--after a four-month layoff due to shoulder surgery. The Lakers thumped the Magic by 25 points in that game, and went on to win the championship in 5 games. Some Magic fans believe Nelson's return might have cost the Magic the championship, citing a disruption of team chemistry in addition to his own poor play individually. Even the staunchest of Nelson supporters--myself included--wouldn't argue that he played well in the Finals, as he averaged 3.8 points, 2.8 assists, 1.4 turnovers, and 34.8% shooting. He registered a miserable Player Efficiency Rating of 4.9. It was an ugly series.

And so, stemming from his poor Finals showing, and the fact that Rafer Alston--whom the Magic acquired at the trading deadline to fill-in for Nelson down the stretch--some Magic fans have argued that Orlando needs to deal Nelson and keep Alston long-term, according to Mike Bianchi, who favors the Magic trading Alston this summer. After all, Alston led the team to the Finals, and had some killer playoff performances on the way there.

How quickly we forget, no? Nelson was in the midst of an All-Star campaign when he tore the labrum in his left shoulder. He had gotten Orlando off to a brilliant start to the season. At the same time, the veteran Alston was struggling with the Houston Rockets, unhappy about their plans to cut his minutes in favor of the second-year man Aaron Brooks.

Enough preamble. Let's get down to business: how do Alston and Nelson stack up individually? Is it possible that Alston is a better player than Nelson? I thought, even after the Finals, that the answers to both these questions would be obvious to most people. Turns out, I thought wrong, evidently. After the jump, a statistical comparison*--complete with visual aid which you can enlarge by clicking--of Alston and Nelson as they compare regarding shooting, playmaking, and impact on team performance.

* based on data from 82games and basketball-reference.

SHOOTING: The following graph illustrates the gap in performance between Nelson and Alston as it relates to shooting. It should be obvious, based on empirical observation, that Nelson is the more accurate shooter. Perhaps it isn't. Anyway, here's a visual representation of the two players in five key shooting categories: traditional FG%, 3FG%, and FT%, as well as effective field goal percentage (which accounts for three-pointers) and true shooting percentage (which accounts for threes and free throws). I also included how the two players stack up on jumpers versus shots close to the basket. Have a look. 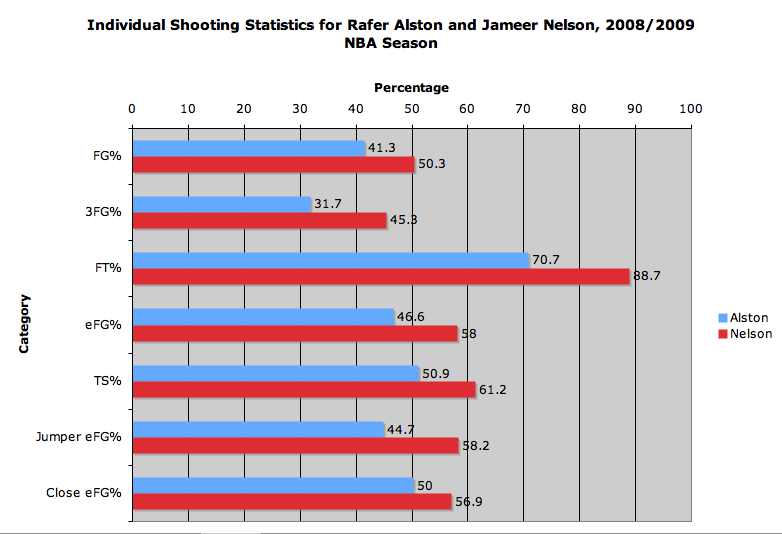 To be fair to Alston, he gets to the rim with far more regularity than Neson does, as close shots account for 36% of his attempts, compared to 23% for Nelson. But Rafer does not convert nearly as efficiently. His inability to finish is not as troublesome for Orlando as it would be for other teams, as Dwight Howard is frequently in the vicinity for the put-back, or at the very least the offensive rebound. But still, a point guard who struggles to make baskets--from point-blank to three-point range--is troublesome for an offense that bases itself on spacing. Defenses are free to sag off Rafer, as they'd rather have him shoot than any of the Magic's long-range marksmen, or Howard. Jameer, in contrast, punishes defenses for leaving him open. He adds a dimension to the offense that Rafer simply does not.

PLAYMAKING: As we'll see, both Alston and Nelson take good care of the ball, dishing assists without turning the ball over too often. You will notice, however, that Nelson bests Alston in both assist rate and turnover rate. 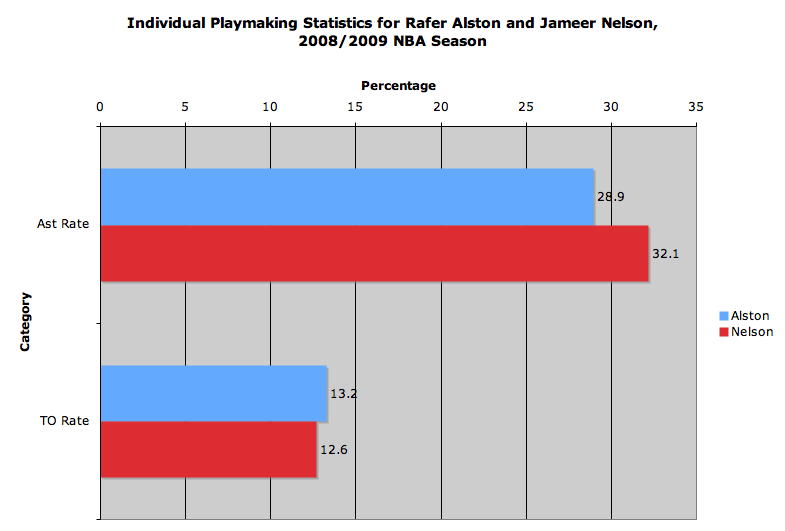 Again, this is not to suggest that Alston is a poor distributor; it's just that Nelson is a better one. To his credit, Alston has a better handle and crossover move than Nelson does. Of course, we can't express that with data. Just trust me on this one.

IMPACT ON TEAM PERFORMANCE: Now that we've seen their individual numbers, it's only logical to examine how the Magic as a whole operate with them on the floor. 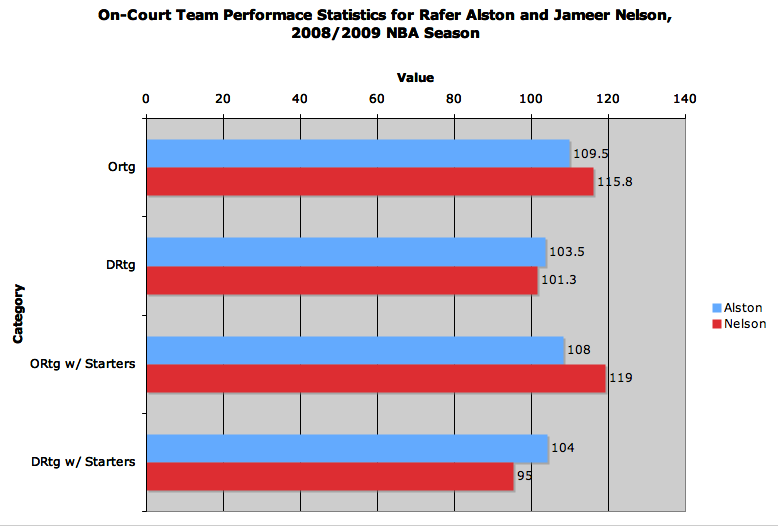 To be more specific, I included their performance in the same statistical categories, restricting them to how they rated with the normal starting lineup only. Courtney Lee, Hedo Turkoglu, Rashard Lewis, and Dwight Howard comprise set lineup. This comparison establishes a "control group" for accuracy. As expected, that foursome performs much better with Nelson than with Alston.

The following graph also fits under the team performance umbrella. Again using the same starting lineups, I wanted to see how the Magic perform on a per-minute basis. Alston played 415 minutes with that group, while Nelson clocked 256. 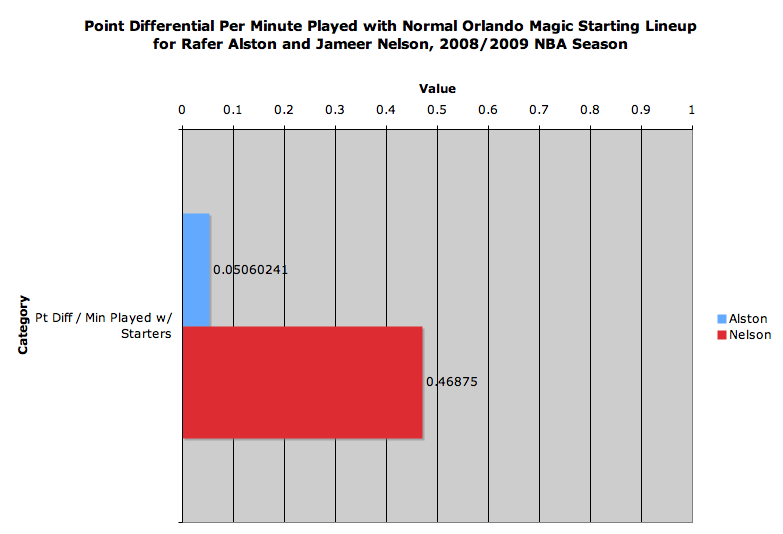 Yeah, if that doesn't convince everyone that the Magic are better off with Nelson, I don't know what will. The same starting unit outscores its opponents at a rate 9 times better with Nelson, and ranked 7th in the entire league in raw +/- this season. Point differential is a great indicator of team success, and as a team, the Magic have a much better point differential with Nelson than Alston.

And so, there you have it. What I believe to be a convincing, statistical case that Jameer Nelson fills the Orlando Magic's point guard role much better than Rafer Alston does. Now, the Magic still perform at a high level with Alston on the floor, which may indicate the team should hold-off on trading him, but Nelson puts them in a whole 'nother tier.

But there's more at work here than just statistics. Alston and Nelson are human beings. They are not impervious to harm, emotionally or physically. I already linked the months-old article regarding Alston's unhappiness with the Rockets, but there are more recent pieces which indicate he's already disgruntled with the Magic's decision to bring Nelson back for the Finals, and their eventually moving him to the bench next season. To be clear, Alston knows that's coming, says the Orlando Sentinel:

... but that doesn't mean he's pleased with it. Here's the Associated Press regarding Alston's being benched for the entire fourth quarter and overtime in Orlando's Game 4 Finals loss:

"I was shocked. I was shocked," Alston said. "It's tough. Your [sic] thinking coach will come back to you. The first two games I could understand, but again we were right there to win the game. As a player you would like to have your number called."

And Alston's slightly more measured take after riding a lot of pine in Game 1, as reported by the New York Daily News:

"I'll give you a good excuse," a grinning Alston said. "I sat 12 minutes real game time, I sat about 30 minutes real life time. So there's an excuse.

"It was odd. I mean, I think everyone can see that. That's unusual to start the game and then you don't even touch the court in the second quarter. But there's no pouting, there's no getting mad, there's going to be no coach and Alston meeting about it. I'm going to go out here and get ready for Game 2 (tomorrow night) and prepare myself like I have been all playoffs."

Can the Magic really bank on Alston's keeping his cool for an entire season as Nelson's backup? Based on the recent past, I'm not so sure.

And even if they could, there's Nelson's psyche to consider. Magic GM Otis Smith let former backups Carlos Arroyo and Keyon Dooling leave via free-agency last summer, replacing them with the journeymen Anthony Johnson and Mike Wilks. Without as much talent waiting to take his job should he falter, Nelson had the best season of his career. With Alston, who vows to "push him in practice" in the Sentinel story linked above, behind him, Nelson may regress. That's something the Magic can ill-afford.

On the whole, two things are clear: Jameer Nelson is better suited to start at point guard for the Orlando Magic than Rafer Alston is, and Nelson may feel his starting job is threatened if the Magic decide not to deal Alston this summer. And so, I'm forced to agree with Bianchi: the Magic should attempt to trade Rafer Aston sometime before the start of the 2009/2010 NBA season.