Given that the Orlando Magic are up 3-1 in the Eastern Conference Finals against the Cleveland Cavaliers, there hasn't been a lot of talk surrounding a player noticeably absent from the matchup between the two East powers - Jameer Nelson.

His 'replacement', Rafer Alston, has done an admirable job of filling in for the All-Star point guard throughout the regular season and the postseason. Everyone knows that Nelson and Alston are two different players with two different skill sets. To put the comparison in simplistic terms, one is a facilitator (Alston) and one is a scorer (Nelson).

However, in last night's game, Alston channeled his inner-Nelson for all to see ... 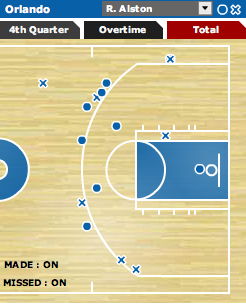 Look at the shot chart and remove Alston's name. Reminds you of Nelson, right? I want to make it clear that I'm not comparing the two individuals in value.

There's only word I can think of when taking a look at the numbers - ridiculous.

Alston will surely regress to the mean in tomorrow's game (and beyond) for the Magic, but for one magical night (pun intended), he performed like he was back in the streets of New York and also, played like a certain All-Star point guard for Orlando.