Share All sharing options for: A Quick Breakdown Of LeBron James' Offensive Performance Against The Orlando Magic In Game 1

One of the main storylines coming into the series between the Orlando Magic and the Cleveland Cavaliers was centered around LeBron James and his propensity to attempt more jumpers than usual against the Magic, mainly due to the presence of Dwight Howard. The question was, would this trend continue for James in Game 1?

Straight up, the answer was no.

But looking closer at the data shows a stark contrast with the types of looks and shots James was getting and taking in the first half vs. the second half.

In the first half, aided by a lackadaisical effort on defense by Orlando, James was attacking the basket numerous times, either converting easy buckets or drawing fouls. James also took advantage of his strength and was backing down his defender, usually Mickael Pietrus, down on the low block for more points. Once that happened, James began getting into a groove from the perimeter and was in a zone that lasted the entire game (20-30 FG, 49 points). 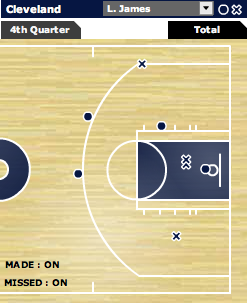 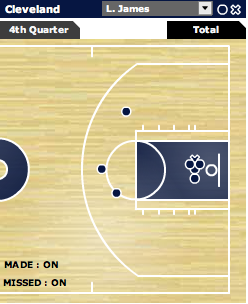 In the second half, though, things changed. The Magic really tightened up defensively and as such, James started shooting exclusively outside of the paint. Now, James could have continued to penetrate the lane but instead, decided to settle for jumpers. Given how well James was shooting from the field during the third quarter, one couldn't blame him for doing so but this played into Orlando's hand. 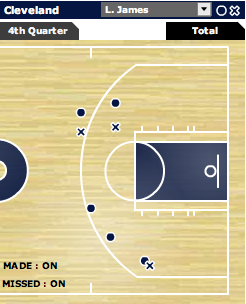 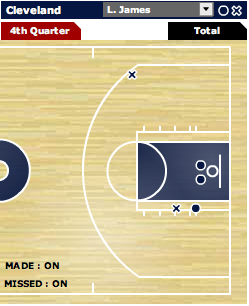 According to ESPN's shot chart, James took a shot in the paint at 3:02 in the second quarter. The next time James would take another shot in the paint was at 9:40 in the fourth quarter. That's a telling trend, in it of itself, and it explains why the Cavaliers looked like two different teams in the first half and the second half. For the first two quarters, James was attacking the basket, the ball was moving, the Orlando defense was collapsing, and Cleveland was looking good offensively. For the last two quarters, James stopped attacking the basket, the ball stopped moving, and the Cavs looked stagnant offensively (circa 2007, it appeared). Credit needs to go to the Magic for, again, tightening up defensively and also, credit needs to go to Pietrus for making James work on offense in the second half, even though he scored.

How James got his points is night and day, when looking at the two halves. From a tactical standpoint, one would want to see more "second-half" James, simply because one has to expect he to regress to the mean, statistically, at some point.

In any case, the next question is, how will James operate on offense tonight?

Keep an eye on that story, as Game 2 unfolds. If Orlando can continue to force - I'm using this word lightly - James to score from the perimeter, the better for the Magic.

Sooner or later, the averages will kick in for James. At least, one would think so. James is an elite player and he could conceivably continue his ridiculous shooting spree. That's something head coach Stan Van Gundy has to live with, though because he can't afford to let James wreak havoc and mayhem in the lane. Just can't.