Share All sharing options for: Eight Keys For the Orlando Magic in Their Series Against the Cleveland Cavaliers

With the Orlando Magic ready to take on the Cleveland Cavaliers tomorrow night in the Eastern Conference Finals, I think now is a good time to take a look at the keys to the series for Orlando.

I wish I could address all of them (there's so many), but it'd be way too time-consuming. It's important to note that this list is an overview, and its items are not ranked in order of importance.

Force LeBron James To Be A Jump Shooter - This strategy is effective, as long as Dwight Howard is in the game and intimidating LeBron James from attacking the basket.

If Howard gets in foul trouble, then James is going to have a field day in the lane. It's imperative that Howard plays active on defense and stays out of foul trouble. 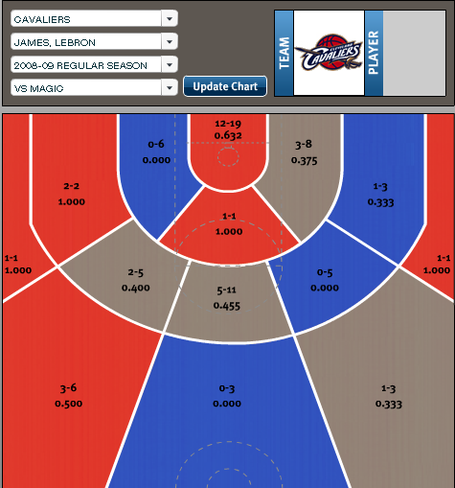 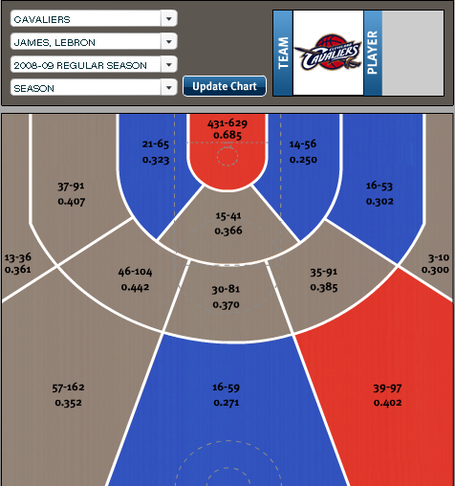 After the jump, seven more keys to an Orlando victory.

Push The Tempo - It's imperative that the Magic run as much as possible against the Cavaliers. I know I mentioned this key in the previous series with the Boston Celtics, but make no mistake, Orlando HAS to run, run, run on Cleveland.

I showed this vid before but it's worth watching again to get a visual example.

If the Magic can effectively push the tempo against the Cavaliers, then the team will have great opportunities for easy buckets and open looks from three-point range.

The Cavs excel in the half-court game. This assertion is backed up by the fact the team was 4th in offensive efficiency (112.4) during the regular season, despite being ranked 25th in pace (88.7). That's darn efficient, folks. If the series becomes a test over who can operate in the half-court, the advantage most likely goes to Cleveland.

That trend on offense has carried over the playoffs, as the Cavaliers are 2nd (114.9) in offensive efficiency despite being ranked 15th in pace (82.4) out of 16 teams.

Here's an example of how well the Cleveland can perform offensively:

The Magic were able to operate in the half-court effectively against the Celtics, but that was against a defense with no Kevin Garnett, which makes a big difference. Cleveland hovered in the top three in defensive efficiency the entire season, which means the team will put up a much tougher resistance defensively (the team finished 3rd [102.4] just behind Orlando, who finished 1st [101.9]).

Break The 100 Point Threshold - It's real simple. In the Cavaliers 16 losses this year, 9 of those losses came when the opponent scored over 100 points.

Dwight Howard Needs To Dominate - Howard needs a monster series, more so on defense than on offense. First, let's address Howard on the offensive end - he's no longer facing off against Kendrick Perkins. Instead, his main defenders will be Zydrunas Ilgauskas, Anderson Varejao, and Ben Wallace. Here's what John Krolik of Cavs: The Blog had to say, with regards to each respective matchup for Dwight:

[...] Perk is one of the best individual post defenders in the league, and not everyone can get Dwight that far away from the basket for his hook shots. Z doesn’t have anywhere ne ar the lateral quickness to keep up with Dwight when he pulls a little Malone move and faces up or g ives a quick drop-step or spin, Andy will get bullied, and Ben might not have enough in his knees to keep up.

Second, let's address Howard on the defensive end. The reason why Dwight needs a monster series defensively is:

1.) the Rashard Lewis and Hedo Turkoglu factor. When Howard is too involved on offense, that takes away from the playmaking and scoring abilities of Lewis and Turkoglu. As we saw in Game 7 against the Celtics, the Magic are at their best offensively when the team has a balanced attack.

2.) The LeBron James factor. Howard is the anchor of Orlando on defense and the main difference between James exploding for 40+ points & taking over a game or netting a "meager" 20 - 30 points. That's a big discrepancy because Cleveland is 27-3, for the entire season, when LeBron scores 32 points or more. If the Magic are able to contain James as best as possible, the team will be in positions to win games.

All in all, it'll be interesting to see what the Cavaliers will do to try to coax Howard (who normally guards Varejao against the Cavs) out of the lane to create room for James and others in the paint. For example, Ilgauskas can hang around the perimeter to attempt jumpers and the occasional corner three. That's something to look out for during the series.

Of course, I've left out the most important name...LeBron James. The Magic really don't have an answer for him (not that anyone does). He's too quick for Turkoglu and too strong for everybody else. If I were Orlando, I'd strongly consider having Varejao's man constantly come over and double team. If Varejao wins the series for Cleveland, so be it.

It's a smart idea and something Orlando head coach Stan Van Gundy should continue to do (he has used this strategy before) because Anderson isn't out there to score, but to defend & rebound. He's the lone starter on the Cavaliers that is not an offensive threat on the court.

Rashard Lewis Must Step Up On Offense - Lewis came up big against Boston (20.4 points per game, effective field-goal percentage of 54.4%, etc), and he's going to have to come up big, once more, against the Cleveland.

James is an elite defender, and as such, Turkoglu is most likely going to have a hard go of it on offense. This is where Lewis is probably going to have to compensate for the expected drop-off in production for Turkoglu, who's been inconsistent in the playoffs up to this point.

Like last round, Lewis has favorable matchups, going up against Joe Smith and the aforementioned Varejao. Don't be surprised if James guarded Lewis for a bit, also.

The table is set for Lewis to have another big series. If the Magic want any chance at defeating the Cavaliers, he will need to capitalize on the opportunity.

It's Your Time, Rookie - With the confirmation that Courtney Lee will be back in the starting lineup for Orlando in Game 1 versus Cleveland, he could be an x-factor in this round for the Magic. This is due to the fact Lee should have a matchup advantage against West (even though he is a good defender), and the versatility he brings on both ends of the court will benefit the team.

If Lewis or Turkoglu are struggling on offense, Lee has the ability to take it upon himself to be more aggressive on offense and pick up the scoring load. The rook has proven he's more than capable of handling this responsibility, given his performance against the Philadelphia 76ers in the first round of the playoffs. Granted, the Cavaliers are better defensively than the Sixers but you get the idea.

On defense, Lee is capable of defending either Mo Williams or Delonte West due to his athleticism, size, and speed. Given the fact Alston (6'2'', 171 lbs) is capable of defending West (6'4'', 180 lbs), Lee could be important in neutralizing either player, depending on the circumstances. This interchangeability is something Van Gundy could exploit in certain matchup situations.

It's important for Alston and Lee to contain Williams and West, or vice-versa, because if either player is playing well during a game, then Cleveland will be extremely difficult to beat.

The following is for the entire season:

The main role players must be contained. Fortunately for Orlando, the team has the personnel to stop them.

Rest vs. Rust - For those curious whether or not Cleveland will be rusty coming into Game 1 of the Eastern Conference Finals, guess again. The Cavaliers are 2nd in efficiency differential during the regular season when rested for three days or more. On the flip side, the Magic should be fine since the team is 5th in efficiency differential when rested for two days. But those stats only account for the regular season.

What about the postseason? Kevin Pelton of Basketball Prospectus has the answer:

To get an idea of whether rest helps or hurts over the course of the series, and to what extent, I studied data from the last nine postseasons, 2000 through 2008.

On the simplest level, the team that was coming off the shorter series in the previous round went 23-21 (.523). The surprising fact about these series is that more often than not (23 out of 44 times), the better-rested team was actually the lower-seeded one in the following series. Still, many of those differences were just a single game, and nobody anticipated the L.A. Lakers having a big edge against Houston because their first-round series went just five games instead of six.

A better way to study the issue is to compare a baseline expectation for the outcome of the series based on the teams' regular-season point differentials and home-court advantage to how they actually played out. We can then compare how those series differed from expectations to the rest advantages. Doing this shows rest as having some value, but not much; a regression analysis cannot conclusively determine that there is a positive value to having played fewer games the previous round, and suggests that each additional game of rest is worth about 0.2 wins during the following series.

Looking strictly at previous conference final series limits the sample size, but provides a more relevant comparison as well as the chance to use total games played over the previous two rounds, the criteria we're really interested in considering. Running the same regression shows total rest to be twice as valuable in the conference finals--each fewer game played the previous two rounds is worth about 0.4 wins, meaning a three-game rest difference between two teams could be enough to shift the outcome of one game in the series.

That sounds great for the Cavs, who would stand to benefit by nearly two wins using the same logic. However, there's an additional factor that serves to offer hope to fans of the Celtics and Magic--the value almost all seems to go to lower-seeded teams who have the rest advantage. Favorites who have played fewer games over the first two rounds have done basically as well as we would expect in the conference finals. In fact, the last team to sweep the first two rounds of the playoffs (the 2005 Miami Heat) ended up losing at the doorstep of the NBA Finals. On the other hand, underdogs with the rest advantage are an improbable 5-3 in the conference finals.

Anyone who thinks Cleveland will romp over Orlando will be disappointed. The Magic are one of the few teams that can stack up with the Cavaliers, so this series definitely won't be a sweep. Whether or not Orlando can beat Cleveland is dependent on whether or not the team can execute against their opponent. Given how insane LeBron James has been playing lately, it may not matter either way. In any case, it should be an entertaining matchup to watch.