The Important Question Regarding Dwight Howard's Struggles Against Yao Ming

Share All sharing options for: The Important Question Regarding Dwight Howard's Struggles Against Yao Ming

I mentioned Dwight Howard's career struggles against Yao Ming in the GameThread for tonight's Orlando Magic/Houston Rockets matchup. The comments section got pretty heated, with people from various camps arguing that either Howard or Yao was the best center in the league. I don't believe that question is as important--for the purposes of this blog, anyway--than this one: why does Dwight Howard have such a hard time against Yao Ming?

This post will examine their head-to-head matchups, and their head-to-head-matchups only, and will not attempt to discern who is the better overall player, all things considered. Right now, we're concerned with the problems Yao presents Howard. But in case you're curious as to what some Rockets fans think about the issue, the fellas at The Dream Shake present their argument that Yao is definitively better than Howard. It begins thusly:

Dwight Howard is better than Yao Ming? You can't be serious...

But back to the task at hand. Before we continue, here are their career head-to-head statistics, which I also posted in the GameThread. To get a better idea of how their head-to-head stats compare with their overall stats, I put them side-by-side, removing the head-to-head stats from the total stats in order to be most precise. The following graph shows how Dwight Howard's career stats in 394 NBA games against other players stack up against his stats in 8 games versus Yao Ming. Please note that you may click any graph in this post to view a larger version of it. 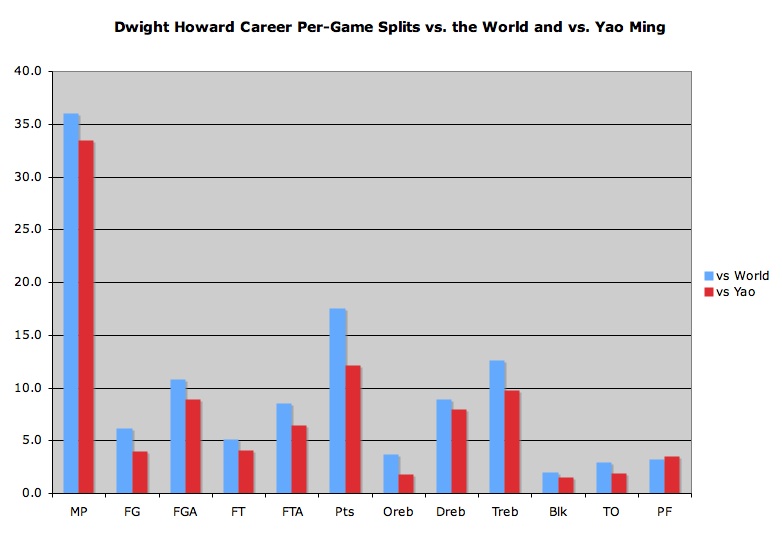 The most jarring numbers are also the most important ones: despite playing similar minutes, Dwight's shot attempts, points, and offensive rebounds take considerable hits. Consider this: in 394 games against other centers, Dwight averages 17.5 points per game. Against Yao, that number dips to 12.1 per game. In other words, Yao is effectively able to reduce Howard's offensive production by one-third. If you're a Magic fan, you've seen what Dwight can do offensively, especially this year. Heck, he hung 45 points on Emeka Okafor, one of the league's best defensive centers, in February. Yet he's never tallied more than 21 points against Yao.

Please make the jump to read the rest of the post.

Unfortunately, Dwight isn't able to rescue many possessions with offensive rebounds, since those get cut roughly in half against Yao. But why? Yao isn't regarded as a great rebounder--despite being the league's tallest active player at 7'06", he ranks 28th among qualified players in rebounding rate, situated with the likes of Zaza Pachulia and Paul Millsap. Those two men are fine players, but Yao should be able to outrebound them fairly easily. Did I mention he's 7'06"?

The most obvious answer to all these questions--why does Dwight Howard stink so bad at [insert statistical category of choice] against Yao?--is also the most obvious: Yao is freakin' huge. I also think rebounding technique might have something to do with Dwight's dip in that category against Yao. Magic TV commentators David Steele and Matt Guokas have frequently noted that Dwight is a "go-and-getter" on the glass, not a "boxer-outter." To snag a rebound, he relies on his athleticism to out-leap and out-reach his opponents. Well he sure as heck can out-leap Yao, but it doesn't do him any good. Yao has 7 inches on him. And Dwight can't box him out because, well, Yao is 310 pounds and has a freakishly wide base. You try boxing him out.

But back to Dwight's offense. Not only does the number of his shot attempts decrease, but the rate at which he converts them decreases too. 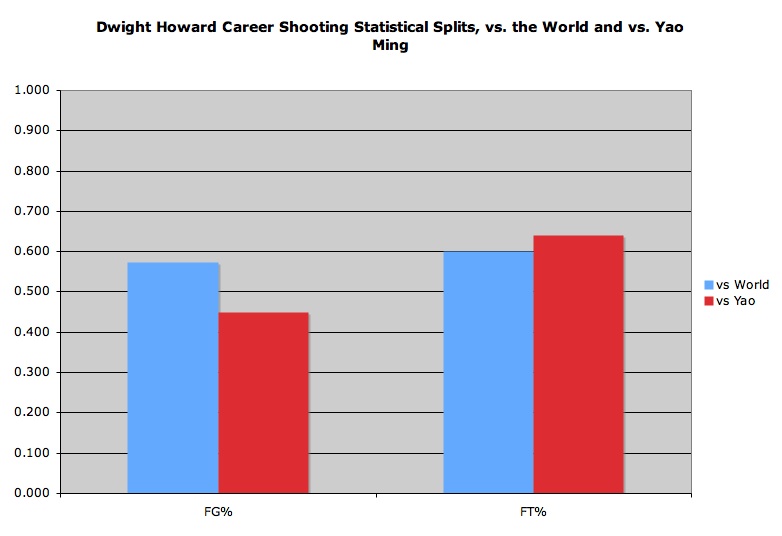 I mentioned Yao's base before, and it's relevant here, too. One of Dwight's best moves is a drop-step to the baseline, followed by a quick spin to the bucket. Dwight is about the scoot around or under the defender, then put the ball off the glass and into the hoop before help arrives. It's a difficult move to defend because of the sheer speed at which Dwight executes it, yet all Yao has to do is slide toward the baseline, thus bumping Dwight off the spot and taking away his leverage on the spin. Yao's size neutralizes Dwight's speed, and even if Dwight gets by Yao somehow, Yao has the reach to either swat or alter the shot.

Which is why the Magic need to go at Yao every time.

The Magic's best bet is to get Yao into foul trouble. As we're about to see, he fouls more often against the Magic than he does against other teams. And in the first meeting between these two teams this year, the Magic drew 5 fouls against him, all in the second half. Be not intimidated by the Great Wall. Worst case scenario: Yao takes an early seat, the Rockets move Luis Scola to center, and go small. I like the Magic's chances against that lineup, frankly, even if it only lasts 5 minutes or so.

Usually, the Magic can weather the proverbial storm against great teams even when Dwight's not having a good night. Not so against Yao, whose offense goes from "really good" to "ridiculously good" against Dwight. Yao's scoring jumps from 19 per game to 24 per game against the Magic, an increase of over 25%. Understandably, that uptick and scoring leads to an increase in shot attempts and field-goal percentage: 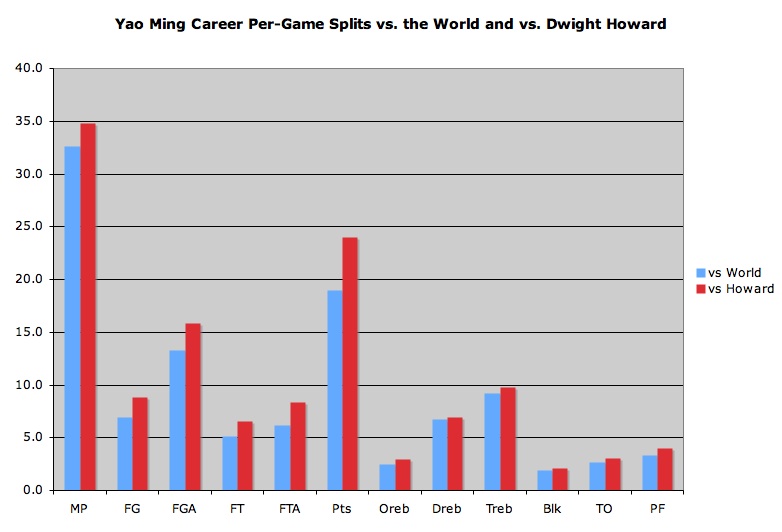 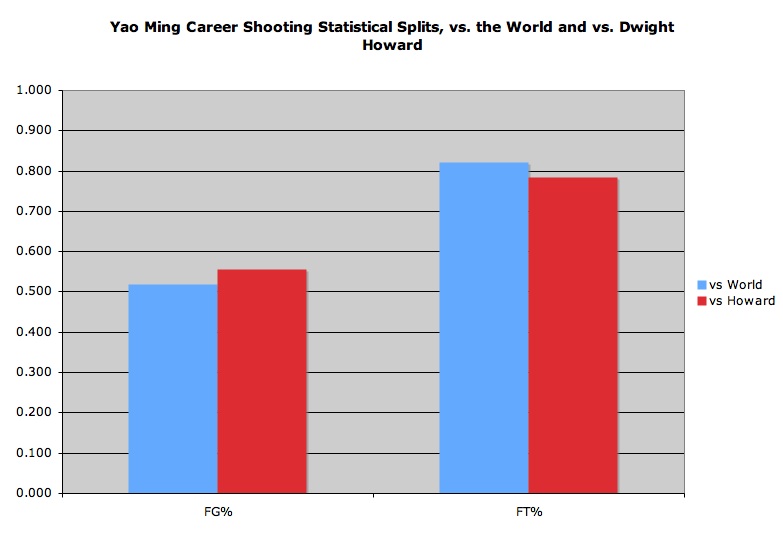 Of course, not every tall dude can score. And Dwight is a brilliant defender. Yet Yao routinely gets the best of him. Skill has a lot to do with it. We know that Dwight doesn't like to leave the paint in order to challenge perimeter-shooting bigs, which is why Zydrunas Ilgauskas and Rasheed Wallace sometimes give him fits. Yao has range and a soft touch, but mixes it up with savvy post moves. Maybe this comparison doesn't quite work--you all tell me--but I liken Dwight's defense of Yao Ming to baseball hitters' approach at the plate against Mariano Rivera: even if you know what's coming, it's almost impossible to stop.

Several hundred words later, the ultimate conclusion is that Yao Ming's size is his greatest asset in neutralizing Dwight Howard defensively, while it certainly aids in his beasting him (note: this is a technical term) offensively. Nothing shocking, I know. If nothing else, this post should give everyone a greater appreciation of Yao's skill, and--on some level--more appreciation for Dwight's athleticism. It takes a 7'06", 310-pound behemoth to render it irrelevant.

NOTE: Use the comments section of this post to discuss all things Dwight and Yao. All other things belong in the GameThread. Thanks.