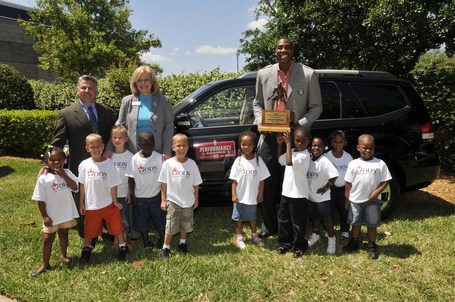 Photo by Fernando Medina of the Orlando Magic;
used with permission of the Magic

As expected, Orlando Magic center Dwight Howard was named the NBA's Defensive Player of the Year today. In honor of his winning, Kia Motors donated a new Borrego to Orlando Day Nursery on Howard's behalf, as depicted in the above photo.

More of Howard's impressive credentials, as well as the identity of the other Magic player to receive a vote, follows the jump.

From the official press release, courtesy of the Magic:

Howard, a three-time NBA All-Star, helped the Magic to its second consecutive Southeast Division title (59-23), including a 32-9 record at home. The Magic held opponents under 100 points 54 times this season -- compiling a 43-11 record -- including a season-low 68 points allowed by New Orleans on Dec. 25. Orlando allowed 94.4 ppg (7,737 points), which ranked sixth in the NBA, and overall the team was in the NBA’s top 10 in seven defensive categories.

Congratulations to Howard, once again.