Share All sharing options for: Discussing Dwight Howard and the Orlando Magic with Chris Ballard of Sports Illustrated 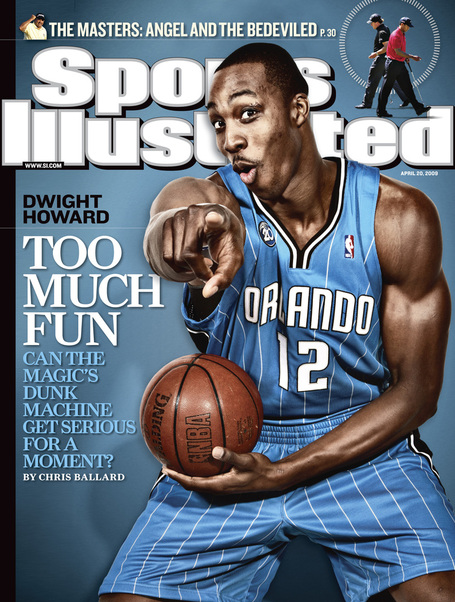 Orlando Magic center Dwight Howard on the cover of the April 20th, 2009 issue of Sports Illustrated

Orlando Magic center Dwight Howard is on the cover of this week's issue of Sports Illustrated, joining Penny Hardaway (1995) and Horace Grant (1994) as the third Magic player to be so honored. The focus of Chris Ballard's feature, entitled "The Happy Dunker," is Dwight's attitude. Read it online here. There's plenty to comment on, including:

SI was gracious enough to put me in touch with Ballard. You can read the brief interview after the jump.

Third Quarter Collapse: Conventional wisdom among fans and mainstream media alike is that the Magic need a rugged "enforcer" power forward to pair with Dwight Howard, someone in the Charles Oakley mold who can play 5-to-8 minutes a game and generally be a nuisance for the other team. Based on what you've seen of Dwight and of the Magic this year, do you agree with that assessment?

Chris Ballard: First off, I think every team would love a Charles Oakley type. I'm of the mind that those guys are undervalued in the league, and long have been (with the exception of Ben Wallace, who somehow managed to end up being overrated). Generally, I'd agree with that assessment, though you guys have no doubt seen way, way more of the Magic than I have. Thinking ahead to the playoffs, who are you going to throw out there to bang? Gortat's a nice athlete, Foyle's a prince of a human being and Tony Battie was an effective role player a few years back, but none are bangers, really. Even Malik Rose, circa 2004 or so, would be great. Guard three through five, get in opposing bigs' heads, create some havoc.

3QC: A potential problem for the Magic in the playoffs is their lack of an All-NBA go-to scorer. In a year or two, could Dwight be the Magic's go-to guy? And, if so, would that give him that mean streak that he seems unwilling or enable to embrace?

Ballard: No doubt Howard could become that guy. I'm not sure that would give him the mean streak, but it would certainly make him tougher to defend. First, though, he has to become better at recognizing and passing out of double teams. And get his free throw percentage at least into the mid-sixties. Can't go to the go-to guy if he's going to miss the free ones. Still, I'd say ideally for the Magic he's never that guy. You want him to give you 25 a game but pair him with a pure scorer who, even if he's the second option most of the game, becomes the first option late. San Antonio's a great example. Duncan gets them to the fourth quarter, then Ginobili finishes (that is, when he's healthy). I suppose right now Hedo fills that role for the Magic.

3QC: Are there any great quotes, be they from players, coaches, executives, or scouts, about Dwight that you simply could not include in the story? And would you like to share them with us?

Ballard: Dwight is a fantastic interview. At one point while we were at his house, he became so comfortable talking that he ended up lying on his couch, holding my tape recorder on his chest, occasionally resting it in the hollow of his neck. He's also the rare athlete who is interested in deconstructing his own psyche.

Here's one quote I found interesting that we couldn't fit in the story. As you know, Howard has taken to singing Beyonce songs at the free throw line. When I asked him about it, he was surprisingly open and honest. As an athlete, you're supposed to pretend nothing ever bothers you, right? The last thing you want to do is show weakness. But here's what he said (and no doubt this could provide fodder for opposing fans during the playoffs):

"What people don't understand is you can really hear everything that goes on in the crowd when you're at the free throw line. You can hear the slightest little noise, you can hear people whispering. If anybody's ever been a speaker in front of a big crowd, when you're looking at the people in the audience, you can see the slightest movements, like you've got a magnifying glass. It's just like that at the free throw line, you can hear everything - people at the top saying stuff, people at the bottom saying 'bend your knees!' or 'follow-through!'"

Interesting insight from Ballard, both in his story and in his interview with us. Thanks once again to him and to Sports Illustrated for their time and consideration.