Taking A Look Back

Share All sharing options for: Taking A Look Back

Back in February, All-Star point guard Jameer Nelson was lost for the season with a torn right labrum. At the time of the injury, panic set in within the city of Orlando (and wherever else Magic fans proudly reside) because it appeared as though the team's championship hopes went out the window. The reason for this quick pretext is because I wanted to take a look back at two suggestions professor Dave Berri of the Wages of Wins Journal conjured up at that moment in time, regarding the loss of Nelson, how his absence would affect the Orlando Magic moving forward, and possible solutions to the team's problem.

Yes, Lewis is an All-Star.  And if he was playing small forward, that selection might be justified.  But Orlando plays Lewis at power forward, and at that position he has problems.  So why not send him to Phoenix for the disgruntled Amare Stoudemire (ESPN’s trade machine says this works)?  This would give the Magic a legitimate power forward. And it would give the Suns…well, I am not sure how this helps the Suns.  This post is about the Magic, though, so we will skip that detail.

If the Suns won’t deal, here are two other trades that could also help:

Send Lewis and Brian Cook to the New York Knicks for David Lee and Stephon Marbury (not sure the Magic should play Marbury, though).

I'd like to, first, address the perceived notion that Rashard Lewis has problems playing the power forward position. Defensively, Lewis is underrated. Here's some data to support this claim:

Granted, advanced defensive metrics are still a work in progress but nevertheless, the numbers shown above paint a decent picture, as to the excellent contributions Lewis makes on defense.

The criticism Lewis should be receiving (if he isn't already) shouldn't center around his play defensively but his play offensively. I'll just say it. Lewis shoots too many threes and doesn't mix it up enough on offense. Instead of driving to the basket or posting up on the low block, Lewis falls in love too much with shooting jumpers. Ever since he's arrived from Seattle (R.I.P.) to Orlando, Lewis has gone away from different aspects in his game offensively. 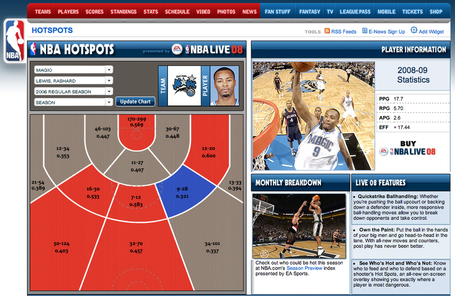 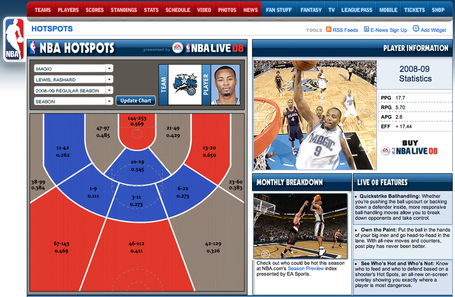 Looking back, it's obvious that a Lewis trade never occurred. But it's worth discussing some of the names Berri threw out there - Amare Stoudemire, Carlos Boozer, and David Lee. Could any of these players have fit in well with the Magic?

I'd say yes to Stoudemire. I've been back & forth with Stoudemire, with regards to how he would theoretically fit with Orlando offensively but I believe he and Dwight Howard could coexist. Amare has a versatile repertoire on offense (can shoot from the perimeter consistently). Obviously Stoudemire thrives the most when utilized in pick & rolls but he can do other things too offensively. On defense, Stoudemire isn't known as a great defender but he's not terrible either. Looking at some of the numbers, Stoudemire appears to be above-average (this is important to note, given the precedence being established with Amare playing alongside Shaq). You would figure playing alongside Howard and for head coach Stan Van Gundy could benefit Stoudemire on defense. Or at the very least, maintain Stoudemire's current defensive output.

I'd say no to Boozer & Lee. Although Boozer has some versatility in his offense (like Stoudemire), his shortcomings defensively are too glaring to ignore. Boozer is not a good defender (struggles with quick forwards, for example). As for Lee, he couldn't coexist with Howard because he's not a threat from the perimeter, at all. Van Gundy values spacing on offense and there wouldn't be any with Lee and Howard on the floor together. Also, like Boozer, Lee is not a good defender either (gets out-muscled against opposing bigs, for example). Could Boozer & Lee benefit defensively if they were to play with the Magic? Sure, but overall, either player's impact with the team would most likely be less than Stoudemire's impact with the team.

Obviously, one can't ignore intangibles and the like. Would Stoudemire be content playing second-fiddle alongside Howard? How would Stoudemire react when Van Gundy is breathing down his neck, expecting maximum effort on defense? I can go on and ask more questions, but you get the picture.

2. Finding Help on the Bench

One could play with the Trade Machine all day.  Although that’s fun, it’s quite possible the Magic would not want to do anything to break-up a 60 win team.  So what else can Orlando do to close the gap?

Here is an idea that might be filed under "thinking outside the box."

Looking back at Table One we see one very productive player who is not getting minutes.  As I noted last December, Marcin Gortat has demonstrated in very limited minutes that he can help.  At that time Gortat has posted a 0.267 WP48 in 133 minuutes.  Gortat has now played 321 minutes and his WP48 is 0.269.  The sample is still quite small. But it looks like Gortat — who currently is the second most productive player on a per-minute basis on the Magic (if we ignore the 29 minutes Adonal Foyle has played)– can help.

Of course we can’t be sure Gortat will be productive in extended minutes (although there is some evidence that he can).  It does appear, though, that playing Gortat more could yield substantial benefits.

The alternative to this strategy - barring a trade - is to keep doing what the Magic have been doing.  That strategy, though, appears to leave the Magic just short of the Cavaliers and Celtics. And that probably means no title comes to Orlando in 2009.

So I think it’s time to play Gortat. The upside is the Magic will move closer to an Eastern Conference title.  And the downside… well, there really isn’t one.  It appears there is nothing Atlanta can do to close its gap with Orlando.

Indeed, this is a move Stan has carried out but not so much because of the loss of Nelson. It's more because of the fact Gortat has been out-performing Battie this season when given the playing time. You may wonder, why does Battie still net more minutes compared to Gortat? Mostly, because Battie is more apt to play alongside Howard on offense. Battie has the ability to operate from the perimeter and stretch the floor while Howard is doing his thing in the lane.

If you look at the minutes distribution for Gortat the past few months, it has risen a bit as the season has progressed.

Now, the reason why Gortat doesn't see more time on the floor is because he's playing behind Howard (arguably the best center in the NBA). Likewise, you don't see Howard and Gortat too much on the floor, paired together, because they can't function well on offense (neither are a threat outside the paint). They're a stout pair defensively, but that doesn't entirely negate the loss in offensive output that occurs when both players are on the court together. In any case, playing Gortat more (regardless of what the exact reasons are) has benefitted Orlando. If you've been following Gortat closely this season, this should come as no surprise.

In the end, we all know what allowed Orlando to maintain its 60+ win pace at the time of the transaction (a solution Berri quickly alluded to). A three-team trade with the Houston Rockets and the Memphis Grizzlies allowed the Magic to dump Brian Cook and a first-round pick for Rafer Alston. Disaster averted. Season salvaged.