Before we get into the proceedings, don't forget to navigate over to Yahoo! Ball Don't Lie's Bedlam '09 Tournament and vote for Dwight Howard's dunk prop v. the New Orleans Hornets' in-game entertainment. Superman is trailing right now, so help push him over the top!

Now onto the fun. It's no secret to casual basketball fans that Dwight Howard & Chris Bosh are close friends. Both gentle giants were able to bond during the 2008 Summer Olympics so I felt it was only fitting, with the Raptors playing the Magic tonight, to have a create a caption competition. Enjoy. 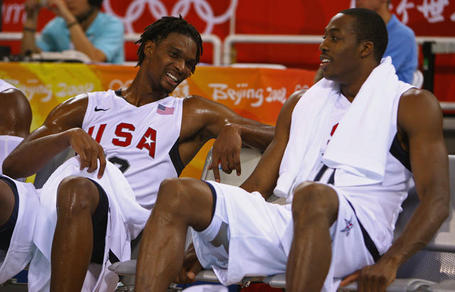