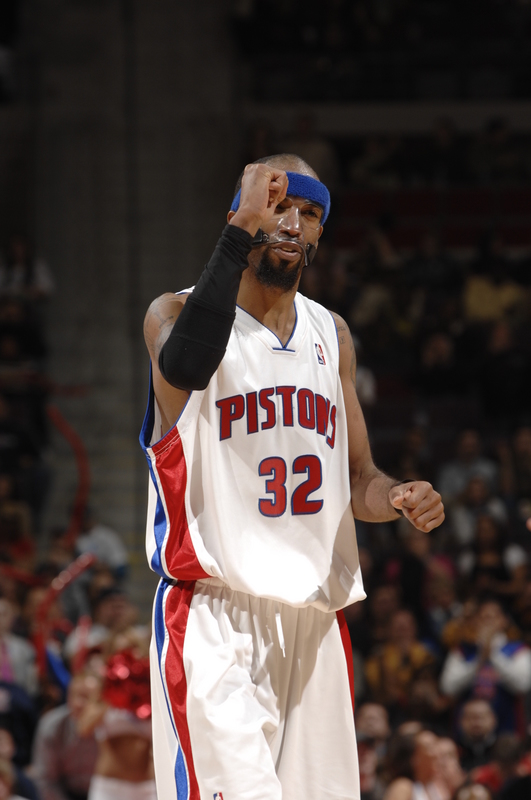 The Orlando Magic continued their lengthy streak of futility against the Detroit Pistons by losing tonight, 98-94. Detroit outscored Orlando, 56-49, in the second half, and ended the game on a 9-4 run. Dwight Howard's 27 points and Rashard Lewis' 21 weren't enough to stop a Detroit offense that ran with uncanny precision; the Pistons had 30 assists on 40 made baskets, and only 7 turnovers. Detroit's victory gives it a 3-0 sweep in the season series, and makes it the only Eastern Conference team the Magic did not defeat this season. Magic forward Hedo Turkoglu left the game with a left Achilles injury and did not return. Richard Hamilton, Tayshaun Prince, and Antonio McDyess--the usual Magic-killing suspects on the Pistons--once again lit Orlando up:

Detroit also got valuable minutes from Kwame Brown, who scored 10 points and grabbed 6 rebounds in 20 minutes; he also took a charge and, on one possession, stripped Howard cleanly in a style Rasheed Wallace would have admired. Reserve forward Walter Herrmann wasn't efficient, scoring 7 points on just 3-of-8 shooting, but ignited the Palace crowd with an acrobatic up-and-under reverse layup reminiscent of Julius Erving. I assure you this is not hyperbole.

I'm not kidding when I say this game went exactly as we all should have thought it would. The Magic played well early, getting the ball to Howard inside. If he wasn't finishing, he was getting fouled, and making his free throws. The Pistons shot 35% in the first half, but their frequent offensive rebounds, and subsequent ability to convert on them, mitigated the poor shooting overall. Stan Van Gundy once again went with a tall lineup of Dwight Howard and Marcin Gortat at the power positions, but it didn't work. The only time the Magic were really able to get anything going offensively was when McDyess was out of the game. With him on the bench, the Magic could grab a defensive rebound, make a quick outlet pass, and get a good look in transition. With him... not so much. Not at all, in fact, which is one of the reasons I suspect Van Gundy is telling reporters right now he regrets playing Gortat over Tony Battie, who did not play at all tonight.

But the Dwight/Marin Experiment wasn't Stan's only questionable lineup move of the night. Ace rookie defender Courtney Lee played well in his limited minutes, but it was J.J. Redick who played more minutes, and in more significant situations. Maybe Lee was hurt, or sore, or ill... but if he wasn't, there's no reason for his not playing. Leaving Redick to contend with Hamilton, one of the best off-the-ball players in the league, is suicide.

There was also some bizarre execution down the stretch for Orlando. Let's set the scene: the Magic lead by 1 and get possession after Brown misses two free throws. The lineup on the floor is Rafer Alston, Redick, Lewis, Gortat, and Howard. On this key possession, in which a three-pointer would have made it a two-possession game with roughly two minutes to play, the Magic run a pick-and-roll with Redick and Gortat on the right wing.

Yes, in crunch time, against a team that's had their number for God knows how long, the Magic run a side pick-and-roll with their two least-experienced players on the floor. Howard and Lewis, their two healthy All-Stars, are nowhere to be found. Although Redick is able to feed Marcin the ball, he bobbles the catch. Brown (figuratively) eats his jumper at its release point, igniting a Pistons fast break. Rodney Stuckey drills a pull-up jumper, giving Detroit a lead it would not relinquish.

A Redick/Gortat pick-and-roll, with Lee and Battie on the bench and Howard and Lewis just... standing there. And Rafer Alston, whose handle is much more reliable than Redick's, is also out of the picture. Stupefying.

It's likely that these two teams will meet in the playoffs, as the Magic appear to have secured the third seed, and the Pistons in good position to secure the sixth. If that's the case, the Magic should count themselves lucky to win even a single game, nevermind the series. About the only good news to come out of this game for Orlando is that it won't have to play Detroit again this regular season.