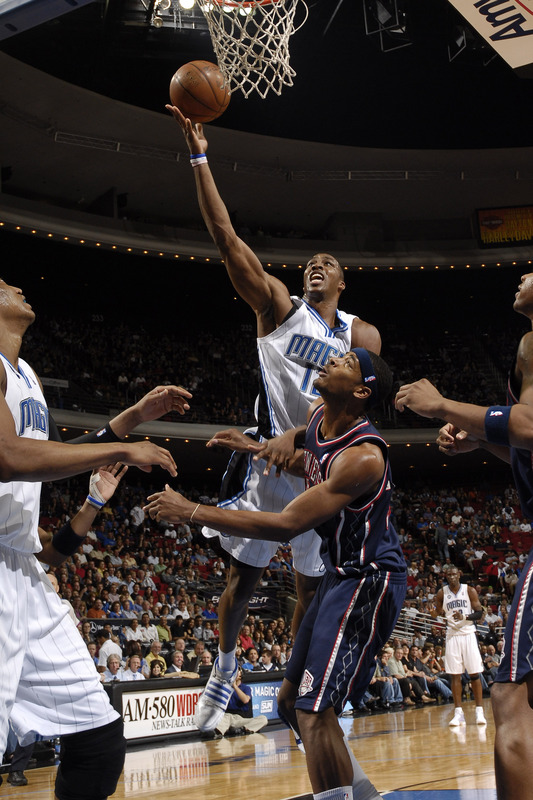 The Orlando Magic earned their third straight victory with a 105-102 win over the New Jersey Nets on Friday night. Orlando outscored New Jersey in the fourth quarter, 22-16, for yet another come-from-behind win. The teams' respective cornerstones did the heavy lifting, as Orlando's Dwight Howard tallied game-highs with 26 points and 15 rebounds, while New Jersey's Devin Harris had 25 points and a game-high 9 assists. Rashard Lewis, the other All-Star in the game, scored the first 6 points of an 8-0 Magic run in the final quarter which gave them a 98-97 lead with 5:22 to play. Hedo Turkoglu took control from there, scoring Orlando's next 8 points and putting the game away on two beautiful fadeaway jumpers from the left baseline. Both times, the Magic were able to create a mismatch with the 6'03" Harris forced to guard the 6'10" Turkoglu in a post-up situation. Mister Fourth Quarter strikes again.

Wins like this one must feel good for the Magic, who once again needed a dominant team-wide defensive stand in the fourth period--the Nets shot 1-for-10 and committed 2 turnovers over the game's last 6:16, says Dave D'Alessandro--to defeat a team on the fringe of playoff contention . Here's how Kyle Hightower put it:

[Stan Van Gundy's postgame] message was simple - playing hard to win in the fourth quarter is good. Always being in a position to play catch-up, however, gets a little tiresome.

For the team's sake, not to mention that of their fans' blood pressure, I hope the Magic wake up soon. Even with their masterful fourth-quarter defense, the Magic had a poor game on that side of the ball by anyone's standards. Devin Harris got to wherever he wanted, whenever he wanted to, and hardly missed in the game's first three quarters. Equally frustrating was Yi Jianlian's efficient performance (12 points, 4-of-6 shooting) and the Magic's failure to communicate effectively. New Jersey runs a simple, dribble-drive offense which is designed to maximize Harris' strengths as a penetrator and finisher. I did not tally how many times Harris or Vince Carter, who played point guard for brief stretches, were able to find a big man cutting across the lane for an easy bucket. Think of it this way: for the first three quarters, the Nets were knifing through the Magic's defense with uncanny precision, like it wasn't even there. And if the New Jersey freaking Nets are carving up your defense in early-March, you might be in some trouble. Clearly, I disagree with Anthony Johnson's assessment of the team's defense tonight. From the Associated Press:

"We haven't really done that in a while," Magic guard Anthony Johnson said of the defensive effort. "It's been a couple months since we put together a full 48-minute game where we've had the defensive focus of a championship team."

However, Orlando's offense was there. Mickael Pietrus, whom I ripped in the news update today, made the most of his 27 minutes. Air France shot 4-of-9 from the field (3-of-6 on three-pointers) for 14 points and added 7 rebounds for good measure. Van Gundy was right when he said Pietrus' size is a boon for the Magic's defense, as he was able to body-up against Carter better than Courtney Lee could ever hope to (though not for lack of trying). Carter had it going on in the second half, but was unimpressive overall, with 19 points on 22 shots.

Also there for Orlando was Dwight Howard. He had a foul-plagued second half, which obscures how dominant he was in the first half. I mentioned Dwight's overall totals before in this recap, but it bears repeating: 26 points, 15 rebounds. Both totals exceed those of the Nets' entire starting frontcourt: Brook Lopez, Trenton Hassell, and Yi combined for 25 points and 13 rebounds. Dwight got whatever he wanted early, and put the Nets' bigs in foul trouble, drawing 2 fouls apiece from Lopez and Yi in the opening period, and 3 from reserve center Sean Williams. The Nets tightened their D on Howard in the second half, but it was too late.

But drawing fouls isn't the only thing; it's only good if you make the free throws, which is why the FTRate in the four-factors chart measure free throws made per field goal attempt. Again, Dwight converted at the foul line, making 12 of his 14 attempts. On a volume basis, that's his finest showing from the line this season. The 85.7% conversion rate is his fourth-highest percentage of the season, and in none of the performances preceding it did he make more than 8 freebies. Since the All-Star Break, Dwight has shot 67.8% from the foul line. That doesn't sound like much, I know, but for a guy who shot 58.8% before the break, it's a huge improvement.

Finally, it must be said that the Magic's point guards did their thang. Rafer Alston missed his fair share of ill-advised floaters, but nonetheless ha 11 points, 4 boards, 6 assists, and 0 turnovers as he made the Magic's offense hum. And because Anthony Johnson made 3 of his 4 shot attempts and scored 9 points, I can overlook his 3 turnovers. Really, all the Magic players had great offensive nights. It's the defense that we should worry about. As Hightower notes in the blog post linked above, this same come-from-behind thing isn't going to cut it against Boston and Detroit, Orlando's next two opponents.