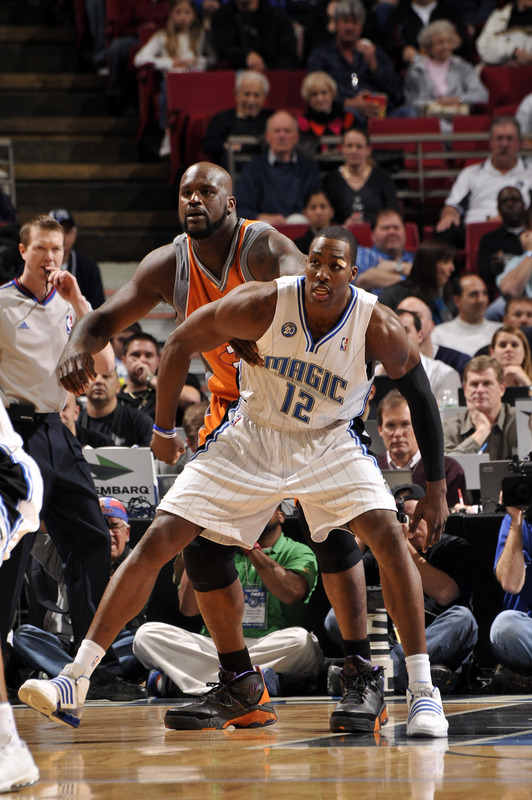 The Orlando Magic rallied late in the fourth quarter to defeat the Phoenix Suns, 111-99, in an exciting, back-and-forth affair. Rashard Lewis had one of his finest games since joining the Magic last season, leading Orlando with 29 points and 12 rebounds, his fourth double-double in one-plus seasons with Orlando. Jason Richardson lit up Orlando for the second time this season, scoring 27 points on 11-of-20 shooting to lead the visitors. It was a sloppy game, with the teams combining for 45 turnovers, and six players finishing with at least four.

The much-balleyhooed showdown between Shaquille O'Neal and Dwight Howard got off to a slow start, but did not disappoint. O'Neal finished with 19 points and 11 rebounds, while Howard had 21 points and 8 rebounds. One of the game's highlights--from a Magic fan's point of view, anyway--came about midway through the third quarter, when Howard posted O'Neal on the left block and took an immediate hard dribble into the lane. O'Neal flopped on the play, hoping for an official to bail him out, but the whistle never came. Howard quickly spun to the outside, elevated, and dunked emphatically with two hands. The Amway Arena crowd--an A+ effort from it, by the way--erupted.

O'Neal got the best of Dwight a few times, though. He blocked Dwight's first shot attempt, and a bit later in the first half plowed Howard out of the lane and dunked as Howard stood helplessly under the hoop. Ultimately, this matchup's hype may have cost the Suns the game. With Orlando leading by 2 and 3:38 to play, Howard got past O'Neal and looked to be on his way for an easy bucket. Shaq muscled him hard, and was whistled for the foul. He earned a technical foul for arguing the call; does anyone believe that Shaq would have been so peeved in a similar situation against any other center in the league? All told, the technical free throw, and Howard's two makes on the shooting foul, gave the Magic a 5-point lead. The Suns' offense stagnated on the ensuing possession, which ended when Courtney Lee came from the weak side to swat Leandro Barbosa as he attempted a layup. Rashard Lewis canned a three-pointer in transition to give the Magic a 101-93 lead with 2:54 remaining.

It may seem silly to praise the Magic in a game in which they only made one-third of their three-point attempts and turned the ball over 24 times, but there's actually a lot to like. First and foremost, the Magic rallied to beat a playoff-caliber team, at home, by ratcheting up the defense. As Paul Coro of the Arizona Republic notes in his game recap, Phoenix missed eight shots over a six-minute span in the fourth quarter. That's not flukey. The Magic ground the Suns' offense to a halt by taking away open jumpers and getting back in transition.

Another thing: the Magic essentially beat the Suns at their own game, as they had no answer for Lewis. Some people mock the Magic's lack of toughness on the front line, as Lewis is a 6'10" small forward being forced to play power forward. Well, with Amar'e Stoudemire recovering from eye surgery, the Suns are playing the 6'07" Grant Hill at the four-spot; two years ago, Hill was the Magic's starting shooting guard. A game without clearly-defined positions is appealing for the liberated fan, but miserable for, say, Suns fans, who got to watch Lewis light up Hill tonight.

Rafer Alston had a marvelous game. I don't mind that he missed two-thirds of his shots and committed four turnovers, because he did a lot of other things well. When the Magic's shots weren't falling in the first half, Rafer consistently drove to the basket, drew contact, and made his free throws. Suns point guard Steve Nash was playing in his first game in a week as he recovered from a sore ankle. Alston made the future Hall-of-Famer work defensively. As a bonus, he hounded Nash into 7 turnovers. Obviously, not all of them were a direct result of Rafer's defense, but he was active tonight. Additionally--and here's what I really like--he's showing some leadership on the floor. After his lone made three-pointer tonight, for instance, Alston didn't preen or smile or any of that nonsense. He immediately looked to pick up Nash on the inbounds, barking defensive assignments to his teammates at the same time.

I also can't say enough about the job Marcin Gortat did tonight. With Howard in first-half foul trouble, the Polish Hammer came in and immediately made an impact, with 8 points and 7 rebounds in the half. He gave Shaq about all he could handle defensively, and it's becoming increasingly clear that the Magic cannot risk losing Gortat in free agency this summer. They'll have the right to match any offer another team makes, as he will be a restricted free-agent, and I hope nobody else catches on to how brilliant Gortat is as a backup center. The Magic will be worse off if Gortat leaves this summer, as they'd have to give his minutes to Tony Battie, who received only his 4th 3rd DNP-CD of the season tonight, incidentally. We generally like Tony around these parts, but Marcin Gortat he is not.

Schadenfreude watch: although O'Neal had a good game, Hill did not, and the Amway Arena crowd ate it up. Hill went 3-of-11 from the field for 6 points, and 2 of his misses were wide-open layups. That's in addition to Rashard's abusing him defensively, by the way. I don't hold much of a grudge against Hill, but nonetheless it seemed relevant to some readers' interests.

My final thought is that Stan Van Gundy needs to plant Mickael Pietrus firmly on the bench. Injuries have derailed Mickael's season, and he's hardly a shadow of the player Orlando thought it was getting when it used its entire mid-level exception on him last summer. In 20 minutes tonight, Pietrus managed 2 points, 2 rebounds, and 1 admittedly impressive rejection of Hill. He shot 1-of-6 from the field, with all of his misses coming on wide-open looks from three-point range. His defense isn't there. The offense isn't there. Lee and J.J. Redick can platoon the two-guard position and be just as effective, although Pietrus is useful in that he can play small forward for some spells, giving Turkoglu a rest.

Of Orlando's 8 wins since losing Jameer Nelson for the season, tonight's was the most impressive. Coming back to defeat the 76ers on the road was pleasantly surprising, but the Magic played horribly for much of that game. The wire-to-wire undressing of Miami was nice, too. But Phoenix is a better team, and the game was actually competitive. In spite of everything, tonight was a great win for the home team.