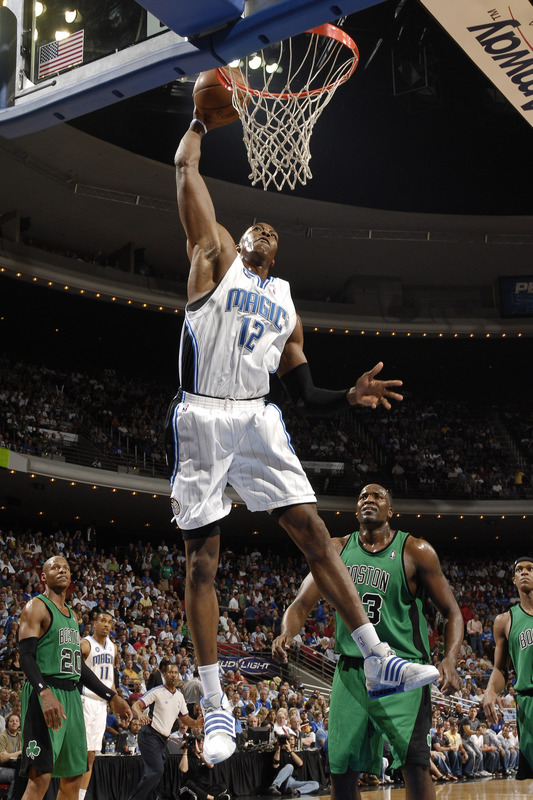 In one of the most significant games in recent franchise history, the Orlando Magic defeated the Boston Celtics, 84-82, to momentarily take over the Eastern Conference's second seed and to tie the season-series between the two teams. Additionally, Orlando clinched its second consecutive Southeast Division crown. Dwight Howard (24 points, 21 rebounds, 4 blocks) and Rashard Lewis (21 points, 6-of-10 shooting) rose to the occasion for Orlando, which--in a disturbing trend--watched a double-digit, second-half lead evaporate on its home floor.

Orlando, and coach Stan Van Gundy in particular, talked before the game about wanting to shed its "soft" label and to make a statement with a victory tonight. ESPN's broadcast crew mentioned that Van Gundy ran an unusually long shootaround today. Boston talked up the importance of this game, too. In short, both teams wanted this game badly, and it showed in the early going. An unusually long and physical scrum for the basketball took place on Boston's first possession, after Ray Allen missed two quick jumpers in the lane. It was clear that the officials were going to let a lot of contact go, which would seem to favor the Celtics.

But Orlando fought hard and played some of its best defense of the season in the first half. The Celtics were unable to get many open looks against a defense which closed out quickly. The Magic moved the ball extremely well early on--notice all the qualifiers in these sentences--resulting in some wide-open looks for Rashard Lewis, Courtney Lee, and Hedo Turkoglu. The Magic also made a concerted effort to drive the ball in the first period, which is the biggest reason Howard secured his 56th double-double of the season after the first 12 minutes; dribble penetration led to easy dump-off passes or to a missed layup for him to clean up.

Fast forward to the second half, though, and it's a different story. The Magic held an 8-point halftime lead, which ballooned to 16 with 3:54 to play in the third period, and that's when everything went downhill for them. Boston scored on 7 consecutive possessions while Orlando only managed a single bucket. After that flurry by Boston, the Magic's lead stood only at 6, and momentum appeared to have swung the Celtics' way.

That's when Dwight Howard made two crucial, consecutive plays to close out the quarter. First, he and Turkoglu executed an alley-oop with two defenders hanging off Howard on the same play they used in this clip against Milwaukee last week. Understandably, that finish got the listless crowd back into the game. Immediately. No preening for Dwight, though. He got back up the floor in time to reject Rajon Rondo's buzzer-beating attempt at the point of release. A tremendous, crowd-energizing, game-changing sequence.

The fourth quarter resembled the third for Orlando, only it was slightly worse. Ultimately, it made the defensive plays when it mattered, none bigger than Howard's block of Paul Pierce's layup attempt with 4 seconds to play: 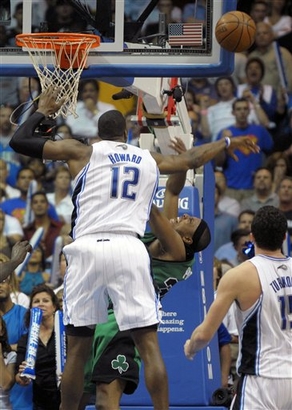 Yes, as the picture shows, there was plenty of contact on the play. In the context of the game, it was a solid no-call; two Celtics bloggers appear to agree, to an extent. As does Pierce, for that matter. From ESPN's John Hollinger:

"The way the game was being called I wasn't fouled," said Pierce. "I should have just taken the short jumper. Dwight made a great play on the ball."

Of course, this game wouldn't be complete without more drama. The Celtics were forced to foul Hedo Turkoglu, who could have bumped the lead to four with two made free throws. Unfortunately, he only managed to split the pair, so Boston had a chance to tie the game with a three-pointer on its next possession. 4 seconds remained on the game clock. Turkoglu made a heady play after the inbounds, giving Orlando's lone remaining foul with 1.6 to play. Boston, out of timeouts, hastily threw the ball to Pierce, whose wild turnaround three-pointer was well off the mark.

This game will have imaginary asterisks next to it in some people's minds, as the Celtics limited Kevin Garnett, their best interior defender and their undisputed emotional leader, to 17 minutes as he works his way back into shape following a knee injury. And for the second consecutive game against Orlando, Boston gave itself a chance to win in the fourth quarter despite the fact that the Magic should have put them away in the third period. Still, Orlando managed to play championship-level defense for much of the game, and had several of its open looks rim out. Turkoglu shot 3-of-18, but not many of his misses were too far off. The kicker is his 1-of-11 mark on two-pointers; that's not going to happen very often. And hey, when you manage to beat the World Champions despite shooting 13-of-41 (31.7%) in the second half, you should feel proud.

I cannot, in good conscience, end this recap without mentioning Courtney Lee's splendid defense on Ray Allen. He didn't yield any ground, he fought gamely through the myriad off-the-ball screens set for him, and even came up with some deflections. That last point is particularly important, because the Celtics' offense thrives on ball movement.

Big win for Orlando, which will look to extend its winning streak to five when it hosts the Milwaukee Bucks this Friday.