Dwight Howard And The MVP Award

Share All sharing options for: Dwight Howard And The MVP Award 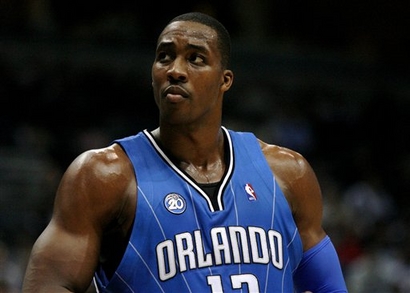 Ben and I were asked by TrueHoop to comment on Dwight and discuss his chances of winning the MVP award (slim to none), whether he deserves consideration for the hardware (yes), etc. I highly suggest giving the post a read.

Now that I’ve taken care of the disclaimer, I wanted to reiterate the fact only a snippet of the opinions of Ben was posted. We both delved into the topic quite a bit, actually, so I think it’s appropriate to unveil our entire transcript.

Ben talked about Howard’s offense while I elaborated on Howard’s defense. Additionally, we both provided brief commentary on the MVP award in general.

Click after the jump to read what we had to say.

Before I delve into Dwight Howard's offense, I'd like to make a few general comments about the MVP award.

My biggest problem with it is voters' tendency to reward team success, using the "best player on the best team" formula. Kobe Bryant won it last year despite averaging fewer points, fewer rebounds, fewer assists, the same amount of steals, and fewer blocks and shooting worse from the field than LeBron James, and he was playing on a faster-paced team. Yet because L.A. finished (barely) with the West's best record, and because Bryant had never won the award before, the press rewarded him. It was silly and stupid.

Another flawed basis for selecting the award is rewarding players whose teams struggled when they miss time with injury. While a team's performance without a key player can give some idea as to his true "value," voting for a player on that basis punishes similarly gifted players who stayed healthy. And being healthy is part of being valuable.

With that off my chest, here's a look at Dwight Howard's offense, and how it relates to his MVP candidacy.

We know that Dwight, who appears to have locked-up this season's Defensive Player of the Year award, gets most of his attention due to his performance at that end of the floor. But he's a two-way player, as evidenced by his leading the Magic--the league's seventh-most efficient offense as of Sunday--in scoring with 20.9 per game. And he does that despite only taking fourth-most shot attempts on the team. Using words like "raw" and "unrefined," his detractors have questioned his actual skill level, because he gets so many of his points on dunks and put-backs. Maybe they aren't paying enough attention, because although he is by no means an elite scorer in the low post, his footwork has improved tremendously, and he can finish with either hand. This isn't Dikembe Mutombo or Tyson Chandler we're talking about.

When assessing his offensive impact, we should look beyond what he does when he has the ball. Just being there, on the floor, in the paint, requires defenses to adjust their game-plan. Few teams have the personnel to single-cover him, meaning they must decide beforehand from which side, and with which player, to double-team him. Orlando's collection of excellent three-point shooters--six men in the current rotation, not including the injured Jameer Nelson, shoot between 37% and 40% from beyond the arc--further complicates the defense's decision-making. None of that happens without Howard. Orlando is a three-point shooting team that would hardly get open three-point looks without him on the floor.

No, it isn't "sexy," to use Stan Van Gundy's word, to lead the league in blocks and rebounding while averaging 21 points per game. What makes perimeter players like Bryant, James, and Dwyane Wade more appealing MVP candidates is their higher points-per-game averages and their ability to take over games down the stretch. It's true that Howard, as a center, is rarely in position to dominate games offensively when needed. Hedo Turkoglu, Rashard Lewis, and Nelson (when healthy) are Orlando's go-to players in those situations, and based on their recent body of work, that strategy needs no tinkering. Dwight doesn't have to impose his will offensively in crunch time because their are four other, more qualified players who can do that. And while I don't want to discuss his defense in too much detail--that's what my colleague erivera7 will address--Dwight is tops in the NBA in rebounding and fifth in blocked shots per 48 minutes of "clutch" play, according to 82games.com. He is just as effective late in games as anyone else in the league, but does not put up huge offensive stats in doing so. However, his very presence on the floor helps his perimeter teammates take care of things on that end.

Subtly dominant offensively. Emphatically dominant defensively. Dwight Howard is just as valuable to his team, if not moreso, than anyone else is in this league. Don't be fooled by the league's perimeter bias.

In a word, no, but he deserves to be in the discussion.

The reason why Dwight Howard warrants consideration for the honor is due, more so, to his contributions on the defensive side of the ball for the Orlando Magic. Howard, at this point, isn’t going to put up obscene numbers offensively (as pointed out by my colleague, Ben). His repertoire is still expanding and head coach Stan Van Gundy values a balanced attack on offense. For instance, if you look at the usage rate of Howard, it’s only 26.1%, which is less than the rates of the other MVP candidates.

However, where Howard makes his presence felt is on defense. It’s no secret that the Magic have become an elite defensive team (2nd in efficiency) and Howard is the main reason why this is the case. Howard has been able to do a plethora of things – clean up the mistakes of his teammates, guard the paint, intimidate opponents from penetrating into the lane with his shot-blocking ability, etc. Howard's continued growth on defense can’t be understated.

The reason why is such a stout squad on defense is twofold – they force opponents into shooting low percentages and they keep opponents away from the free-throw line. If you read between the lines, Howard makes both things possible by deterring the opposition from entering the paint. This makes opposing teams shoot jumpers from the perimeter, which eliminates the chances for easy baskets and trips to the free-throw line.

All in all, Howard has been a force on the defensive end for the Magic. Just look at the statistics – 1st in rebounding rate, 3rd in block percentage, eFG% allowed is 46.6% (which is excellent and tops among the MVP candidates), and more (here’s a further in-depth look at Howard’s defensive numbers).  When you consider the fact several Magic players aren’t known as great defenders, it makes Howard’s impact on defense more impressive.

Personally, I think the MVP should go to the best player in the league (I’ll save my explanation as to why). Because of that, there’s no doubt in my mind that LeBron James is the MVP so far this season (with Chris Paul & Dwyane Wade a close second). When determining value, I look at the numbers.

I like to quickly address that Howard's respective plus/minus numbers seem to be a bit fluky. The reason for this is the fact that back-up center Marcin Gortat has played well this season. Thus, Gortat’s productivity has cut into some of Howard’s statistics.

Obviously there are a plethora of statistics that can be used, but when looking at some of the numbers provided (which calculate value in different ways), it’s clear that James has some competition for MVP. However, I give James the nod when looking at the stats, overall, as well as acknowledge the fact that James has been the most clutch and the superior defender out of the aforementioned trio. If it was any other year, Paul or Wade would have taken home the hardware.