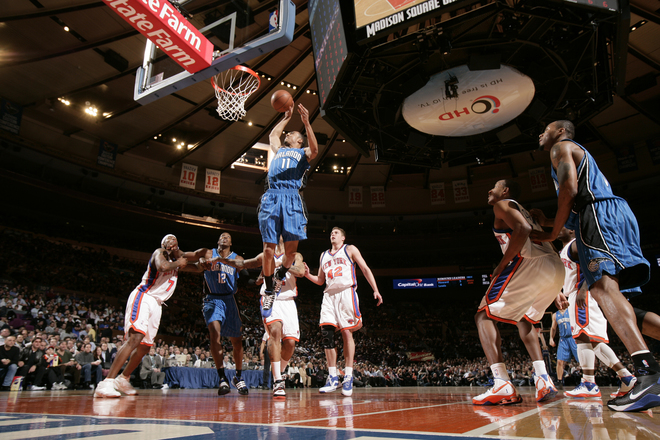 It took a furious fourth-quarter rally for the listless Orlando Magic to get past the New York Knicks on Monday night, defeating them 106-102, on Legend Awards Night and unofficially dashing their dim playoff hopes. Dwight Howard was too much for the Knicks to handle on offense (29 points on 12-of-18 shooting, 4 offensive boards) or defense (10 defensive boards; four blocked shots, at least two of which he kept in-play; and countless alterations), but he, Courtney Lee, and Anthony Johnson were the only Magic players who showed up from tip to horn. It took a late hot-shooting streak from Hedo Turkoglu and Rashard Lewis for Orlando, which played great defense much of the night but could not get its shots to drop, to pull out the win. Nate Robinson led New York with 19 points, but shot just 6-of-23 and committed 4 turnovers.

It's hard to take much away from this game, because the Magic played about as horribly as possible through the first three periods. The comeback came about about as you'd expect it would: Orlando strung together some defensive stops with some made three-pointers, which erased the deficit in a hurry. There's nothing groundbreaking in the way Orlando made its comeback, which is why I'm not going to belabor the point. For comparison, see Orlando's win at Philadelphia in February.

What I do want to discuss, though, is Courtney Lee. He had arguably the best game of his career: 22 points on 6-of-8 shooting (2-of-3 on three-pointers) and 8-of-8 from the foul line. He calmly stepped up and hit some big jumpers in the third quarter, when nobody else had it going. The most important play he made was his interception of a pass Chris Duhon intended to throw to the Knicks' roll-man (Chris Wilcox?) on a pick-and roll. Rafer Alston had just given Orlando a three-point lead, 96-93, with a three-pointer at the shot-clock buzzer on Orlando's previous possession. Lee made two free throws to boost Orlando's lead to 5, and on the Knicks' next possession, Alston again intercepted Duhon's pass, and that's about all she wrote.

Lee did more than make clutch free throws and defensive plays. He also threw down the Magic's second-filthiest dunk of the game, which the photograph at the top of this recap depicts. Anthony "Dad" Johnson had the best, a thunderous tomahawk which came out of nowhere. Indeed, the lane was open to the Magic almost all night, but Howard, Lee, and--to a much lesser extent--Johnson were the only players to really exploit that. Rafer Alston made a bit of an effort, but he finished at the rim about as well as the Knicks--who held a 10-point advantage with 9:33 to play--finished this game. Which is to say: not well at all.

But let's not talk this victory up too much. Most of the Magic looked so dispassionate and lax for the balance of the game. Sure, the Magic were able to "flip the switch" and impose their will on the game, but they won't be able to do that against every team in the league. Clearly, this sort of non-effort will get them blown the heck out against Boston this Wednesday in a game which has tremendous playoff implications, as the winner would appear to have a leg-up in the race for the East's second seed and homecourt advantage at least until the conference semifinals. If nothing else, just get excited that the Magic continue to get cold-blooded brilliance from Courtney Lee, whom I gather is becoming one of the team's more popular players around town.