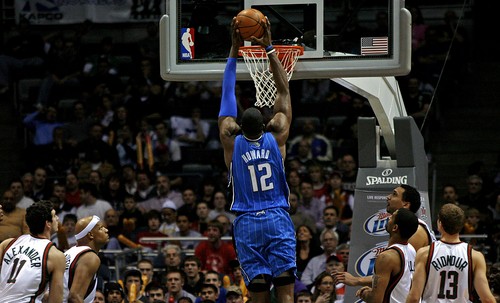 The Orlando Magic fed Dwight Howard the ball early and often in their 106-80 win against the Milwaukee Bucks, and the strategy worked to perfection. In the opening period, after which Orlando led 36-20, Howard scored 18 points and grabbed 6 rebounds. While he took his customary rest at the start of the second period, Orlando extended its lead, and held a commanding 65-35 edge at intermission. Indeed, Orlando scored more points in the first quarter than the Bucks did the entire first half, and cruised to one of its easier wins of the season.

Howard's final line of 28 points, 12 rebounds, a career-high-tying 7 assists, and 2 blocks will no doubt draw everyone's attention, but the man who made the Magic's offense work was Hedo Turkoglu. On the eve of his 30th birthday, Turk tallied 14 points, 10 boards, and 7 assists of his own. His ability to drive-and-kick absolutely befuddled the Bucks, a competent defensive group, and left them scrambling to close-out on Orlando's wide-open shooters. He also threw two beautiful lobs that Howard finished off emphatically, including one in which both Dan Gadzuric and Joe Alexander were hanging onto him. The results of this game lend weight to this analysis of some of Orlando's splits Orlando Magic Daily did last week. Here are some relevant quotes from that post:

It's no real secret to Magic followers, and this study confirms it: Dwight Howard isn't a dominant offensive presence against the league's best teams. Howard struggles to score in the post against the likes of Boston and Detroit, which is evident in his 10-point drop in field-goal percentage from good to average teams.

Against worse teams or when the Magic are ahead, Turkoglu spends much of his energy getting his teammates involved, shown by his 5.3 assists average against poor teams.

Yeah, that about covers it.

More on Dwight tonight, though. His passing was brilliant. In his first 390 career games, he never recorded a game with 7 assists or more. He's done it twice in his last 4 games, albeit against teams with little-to-no interior defense. Four of his assists tonight resulted in three-pointers, while 2 were to cutters from the weak-side and 1 was on a long jumper by Turkoglu. It's very encouraging to see Dwight showing better court awareness, and one hopes we see more games like this one in the future. He only averages 1.3 assists per game, but there's no reason why he couldn't double that average next season.

But it wasn't just Turk and Dwight getting it done. Courtney Lee had his third solid game in a row, with 13 points and 3 three-pointers, while J.J. Redick added 9 points off the bench. He was the recipient of one of Dwight's "cutter" assists, running unimpeded from the left corner to the basket for an easy two. Marcin Gortat needed only 15 minutes to score 10 points and grab 8 boards, and he did it without missing any of his field goals (4) or free throws (2). Rafer Alston didn't shoot well (2-for-6) against his former team, but was all over the floor defensively, defecting passes, stripping guys cleanly on their way to the rim, and generally being a pest.

About the only negative in this game from Orlando's perspective is its offense in the third quarter, which stagnated against a more energetic Bucks team. Milwaukee employed a full-court-press, and the Magic looked as though they'd never seen one before. In one instance, the Magic weren't able to get the ball inbounds, forcing them to call timeout. Courtside microphones picked up coach Stan Van Gundy's message to his team as it huddled up:

"What are you [redacted] doing out there?!"

The offense recovered after that timeout.

Orlando will now enjoy a much-needed two-day break before its next game. Maybe the time off will allow Rashard Lewis to find his missing shot. Lewis improved on his horrendous outing against Cleveland, but still shot a meager 4-of-11 from the field for 13 points. He added 3 rebounds in 34 minutes. It's hard to believe this is the same player who averaged 18.4 points and 5.4 rebounds in January, while shooting 46.4% from three-point range.

For what it's worth, tonight's win gives Orlando 50 on the season, against 18 losses. Orlando didn't win its 50th game last season until April 13th.