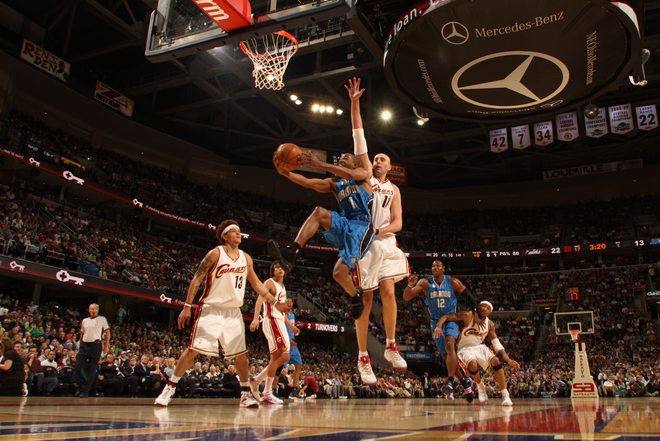 The Orlando Magic came close to dealing the Cleveland Cavaliers their second home defeat of the season, but their offense stagnated in the fourth quarter and Cavs forward LeBron James took over, leading Cleveland to a 97-93 win. With 47 seconds to play, James hit a deep three-pointer in front of Orlando's bench to give Cleveland a 95-93 lead it would not relenquish. He tallied 43 points, 12 rebounds, 8 assists, and 4 steals, mitigating his teammates' meager production. Cleveland's bench only mustered 5 points, and although starting point guard Mo Williams scored 21 points, he needed 20 shots to get there. The loss wasted brilliant efforts from Orlando's starting backcourt of Rafer Alston and Courtney Lee, who combined for 42 points on 17-of-29 shooting. Rashard Lewis had yet another poor game with 6 points on 3-of-15 shooting, missing all 8 of his three-point attempts. In the last week (four games), he's shot 11-of-46 from the field, including 3-of-27 from three-point range, with all 3 of those makes coming in the same game. He picked the wrong time to enter a shooting slump, because with a normal Lewis, Orlando probably wins this game.

Although the game was ultimately decided in the fourth quarter, momentum shifted Cleveland's way late in the third. The Magic had taken control of the game, keeping the Cavs off the offensive glass and forcing them to take contested jumpers, while moving the ball brilliantly at the other end of the floor and getting wide-open looks themselves. With 1:39 to play in the third, a pair of free throws by Hedo Turkoglu gave Orlando a 75-66 edge. James took over, hitting two jumpers on Cleveland's next three possessions. On one Magic possession, Tony Battie missed a layup which should have counted, as Cleveland's Zydrunas Ilgauskas inadvertently grabbed the net while the ball was on the rim. No violation was called.

The real turning point came on the final possession of the third quarter, when James was able to get to the rim unencumbered, catching the ball 30-feet from the hoop and somehow getting there in two steps without traveling. No-call or not, no Magic defender was there to even contest the shot, and in that sense the basket deserved to count. There's no excuse for nobody to step in front of James in that situation.

But let's not focus too much on two no-calls, because officials do not win and lose games. That's making excuses. Honestly, the fact that the Magic were able to turn a halftime deficit into a third-quarter lead in the Cavs' building is encouraging, and in that sense I still believe Orlando would give Cleveland a helluva time in the playoffs. Orlando needs to be worried about Cleveland's absolute negation of Dwight Howard. He took only 8 shots, and 5 free throws, not because his teammates weren't looking for him; they simply could not get him the ball. He still did his thing defensively, with 15 rebounds and 6 blocked shots.

He'll get a lot of blame, though, for staying in the lane too long on the Magic possession immediately following James' go-ahead triple. With the clock winding down, Turkoglu had a reasonably open three-point look from the right wing, roughly the same spot from which he hit a game-winner in Portland earlier this season. Before he took the shot, he rifled the ball to a Magic player (Alston? Lee?) in the left corner. Like everyone else in the building Dwight was expecting Turk to shoot, and got caught camping while positioning himself for an offensive board. The turnover gets credited to Howard, but that one's really on Hedo for breaking the play.

Magic coach Stan Van Gundy, for his part, doesn't blame Hedo. From his postgame comments, which I will immediately put in the Quotes From Coach archive:

"You won't see that call again. That, I guarantee you," Van Gundy said. "You will not see, with the game on the line, a 3-second call in the last 10 seconds. That's part of the reason they're 30-1 at home. They're a very good team, and when you get calls like that (expletive), you're in pretty good shape."

If you're a Magic fan, don't hang your head too long. Orlando got great contributions from its role players (insert "except Rashard Lewis" joke here) and gave the Cavs about all they could handle on their home floor. It took an absurd fadeaway three-pointer from James--a career 32.5% shooter from that distance--to give Cleveland its decisive lead. By no means am I saying this win is a fluke; as you can see in the four-factors chart, Cleveland finished ahead in three of four categories, and all categories were reasonably close. Rather, what I'm trying to say is the following: without its second-best player, Orlando went into The Q and played this year's probable NBA champions almost evenly for an entire game. Orlando should mostly be proud of its effort. And, if its any consolation, the Boston Celtics lost to the Chicago Bulls tonight, keeping Orlando within a half-game of Boston for the second seed in the Eastern Conference.