Vescey: "Marcin Gortat Will be the Mehmet Okur of This Summer's Free Agent Class."

Share All sharing options for: Vescey: "Marcin Gortat Will be the Mehmet Okur of This Summer's Free Agent Class." 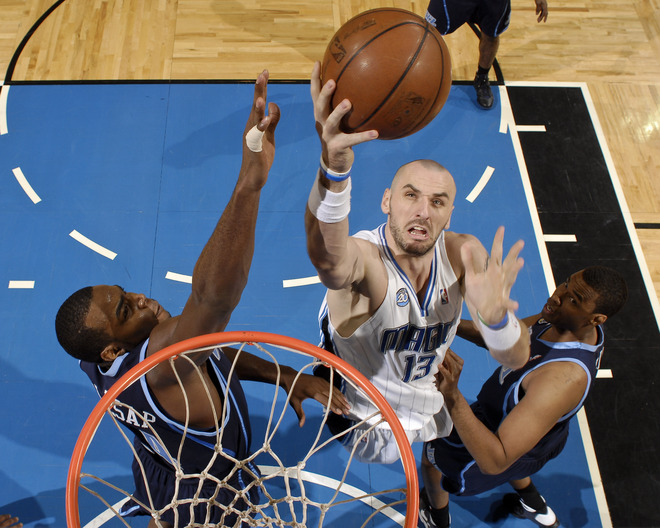 It's no secret around here that Marcin Gortat is one of my favorite players, and in a completely unironic way. The Magic's second-year reserve center, aka The Polish Hammer, aka The Warlock, has emerged as one of the league's best rebounders and shot-blockers on a per-minute basis. As of today, the only qualified players in the league who rebound at a better rate than Gortat are Portland's Joel Przybilla, Orlando's Dwight Howard, and the L.A. Clippers' Marcus Camby. Because Gortat backs up Howard, the league's best, highest-profile center, he had not received much acclaim outside the Orlando area. Somehow, I don't think Magic fans minded too much, as they don't want Gortat to play himself out of the Magic's price range this summer, when he will enter restricted free agency.

Like all good things, Marcin's relative obscurity had to come to an end. With some solid performances lately (13 points and 15 boards last week against Chicago, 8 points and 8 boards on Sunday against Utah), Gortat has quickly become one of the league's worst-kept secrets. They're even onto him in the Big Apple, where Peter Vescey (yes, I know) wrote the following in today's New York Post (HT: MagicMadness):

Orlando's Marcin Gortat will be the Mehmet Okur of this summer's free agent class. Dwight Howard's raw backup isn't going to come cheaply, but the team that collars him will have spent wisely on a guy guaranteed to average an easy double double.

After the jump, we'll explain how Okur's situation with Detroit relates to Gortat and how Gortat compares with some other similar free-agents-to-be.

Here's a quick rundown of Okur's history with Detroit, to which Vescey alludes: the Pistons made Okur their second-round draft choice in 2001, and he joined the team the following season. In his sophomore year, Okur averaged 9.6 points and 5.9 boards in 22.3 minutes per game while backing up Ben Wallace and Elden Campbell at the power positions, and took over Campbell's starting job from mid-December until early February, when Okur was forced out of the lineup due to back spasms. Detroit shuffled Okur back into the rotation once he was healthy, but there wasn't much room for him after they acquired Rasheed Wallace at the trading deadline. That trend continued into the playoffs, when Okur's minutes dropped to 11.5 per game. The Pistons went on to win the NBA championship, but the Utah Jazz were confident enough to offer the then-25-year-old Okur to a six-year deal worth $50 million, which was too much for Detroit's blood. In five seasons with Utah, Okur has become its 10th all-time leading scorer and has averaged 16.1 points and 7.9 rebounds per game, making one All-Star team as an injury replacement.

To be clear, no team will make Gortat (career averages: 3.5 points, 4.1 rebounds) an offer worth anywhere near half what Okur got, especially not in this economic climate. Right now, it's too early to guess what a more realistic figure for him might be, but statistically, he's almost on-par with three other young, high-energy, high-potential frontcourt reserves who are set to make a fortune this summer in free agency: New York's David Lee, Utah's Paul Millsap, and Boston's Leon Powe. Teams are already lining up around the block for Lee and Millsap, who may see Okur-like money this summer; Powe is not as highly coveted, but may find himself inking a deal worth roughly the mid-level exception, if not more. You can see a side-by-side comparison of all four players' cumulative career statistics by clicking here.

Clearly, Gortat is not on the same tier with those players in terms of offensive skill, although he is fairly efficient. Where he makes up for it, though, is on defense. Rebounding and shot-blocking are in short supply in today's NBA, so Gortat's facility in those two aspects of the game is valuable. And it's not as though he's an all-defense/no-offense stiff in the mold of DeSagana Diop. He's a two-way player, he's young, and the Magic won't have much money. If he continues to play this well, the odds of Orlando's retaining him are slim-to-none. But stranger things have happened. Last year, Houston Rockets forward Carl Landry averaged 8.1 points and 4.9 rebounds in only 16.9 minutes per game, yet only received a three-year, $9 million offer sheet from the Charlotte Bobcats. Houston stopped laughing with glee long enough to match the offer, retaining Landry at well below market value. The situation with Landry is the exception that proves the rule, but if nothing else it gives the Magic and their fans hope that Gortat can indeed stay in Orlando beyond this summer.