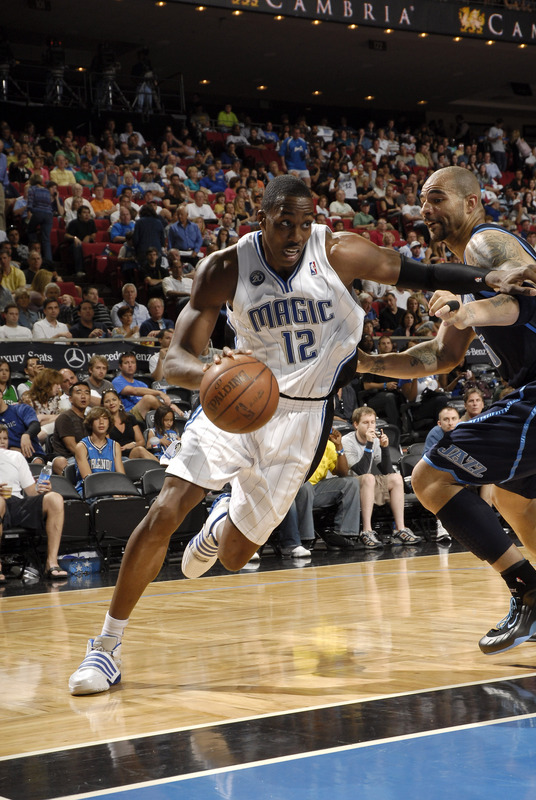 The Orlando Magic earned a wire-to-wire victory over the visiting Utah Jazz on Sunday, 105-87, after jumping out to a 15-3 lead. Dwight Howard had his way with the Jazz's front line, able to establish deep post position at will. He recorded a double-double in the first period and finished the game with 28 points, 20 rebounds, and 3 blocked shots. Rafer Alston had another brilliant game as the Magic's starting point guard, outdueling stud Jazz point guard Deron Williams with 16 points, 6 assists, 2 steals, and only 1 turnover. Rashard Lewis and Hedo Turkoglu struggled from the field, but Anthony "Dad" Johnson and Mickael Pietrus made up for with with 3 three-pointers apiece off the bench. Orlando's win, which came in spite of 14 missed free throws and a 23-and-13 evening from Utah power forward Carlos Boozer, brings it to within a half-game of Boston, which lost in Milwaukee today, for the East's second seed.

On the first possession of the game, Alston went left around a Howard screen on the left foul-line extended and drove unimpeded to the basket for a layup, the likes of which most players only see in pre-game warmumps. That play indicated how the rest of the evening would go for Utah, which was clearly winded after playing a triple-overtime yesterday in Miami. Orlando was quicker to seemingly every loose ball and looked to push the tempo at every opportunity. However, in a halftime interview, Alston said the Magic would push the tempo regardless of how tired the Jazz were.

Howard was simply incredible. As I mentioned, he was able to establish post position with ease, and he finished around the rim authoritatively. Part of it has to do with Utah's defense, as the undersized tag-team of Boozer and Paul Millsap had to defend him for much of the night, but neither of those guys is weak. Dwight schooled them repeatedly, and at times too aggressively. He committed 7 turnovers (3 offensive fouls, 2 3-second violations, and 2 bad passes). He was largely able to mitigate those errors with great defense, though.

It's a good thing the Jazz were a bit tired and Howard went into what we might start calling Beast Mode around these parts, because the Magic's other featured players did not impress. Lewis shot 2-for-9 for 5 points, missing all 6 of his three-point attempts. Earlier this season, he made at least one three-pointer in 55 straight games over a stretch of 117 days. Now he's gone trey-less in 2 of his last 3 outings, and one wonders if the long season is beginning to take its toll on him. Including today's game, Lewis is shooting 42.3% since the All-Star break, and 35.6% from three-point range. As far as I've seen, he's getting the same looks he normally does, but they just aren't going in. Hopefully he can shoot himself out of this slump soon, because the Magic would be unwise to rely on Johnson or Pietrus to keep filling it up from three-point range.

Meanwhile, Turkoglu looked rusty, playing for the first time in 6 days. Although his shot wasn't with him, he found other ways to contribute, finishing with a team-high 8 assists and only 1 turnover.

In fact, it was three-point shooting that spelled doom for the Jazz tonight. Orlando didn't shoot them particularly well--11 of-34 for 32.4%--but Utah was even worse, going 1-of-9 1-of-11. Rare is the team that can win despite being down 30 in the three-point column. And I give Utah a lot of credit. The Jazz didn't sleepwalk through this game, giving an honest effort, but Orlando was just too good to really let them back in it.