Share All sharing options for: Reviewing Rafer Alston, Part One: Examining the Offense 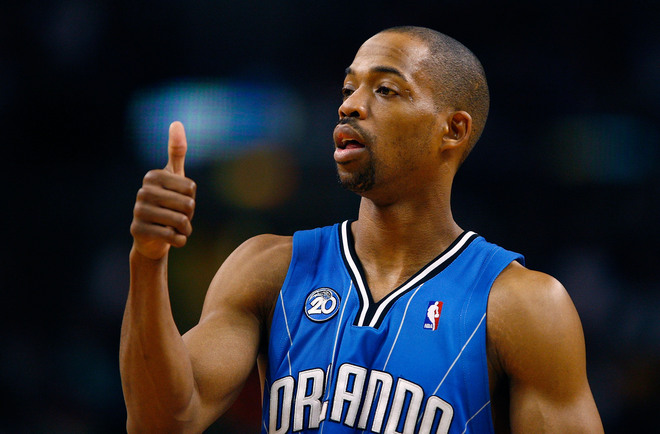 Last night against the Washington Wizards, point guard Rafer Alston played his 12th game for the Orlando Magic, and his 11th as a starter. Acquired at the trading deadline to replace the injured Jameer Nelson and to return journeyman Anthony Johnson to the bench, Alston has led Orlando to an 8-3 record in his starts. As with the rest of the team, Alston's true test will be in the playoffs. However, enough time has passed for us to fairly evaluate Rafer's contribution to the team. This post, which focuses on offense, is first in a two-part series analyzing Alston, both individually and how he fits with the overall team. My colleague erivera7 will have part two, which focuses on defense, ready sometime in the near future.

Here's what I glean from this table: maybe it's Alston's style of play, maybe it's the fact that the team was rejuvenated by his arrival--recall that the day prior to his arrival the Magic suffered their worst defeat of the year, on national television, no less--but the data seem to indicate that the team is more aggressive. It's running slightly more, shooting more effectively, getting much more free throw opportunities, and even grabbing more offensive rebounds. The downside is that it's turning the ball over on 16.7% of its possessions, which might be a problem come playoff time.

We should note that Dwight Howard's slight improvement at the foul line--63.7% in Alston's starts compared to 60.3% in everyone else's--could have artificially inflated the free throw rate statistic, since it measures free throws made per field goals attempted, because drawing fouls is useless unless one converts the resulting free throws.

Another thing to take away from the table: this team can't roll with Johnson starting at point guard. His lack of speed forces the team to play a slower style, for which it isn't built. The team's increased turnover rate attests to that. We saw similar turnover woes two years ago, when Brian Hill coached a halfcourt-oriented team anchored by Nelson, Howard, and Grant Hill.

After the jump, we'll examine the players' individual stats.

Note that I'd ordinarily adjust the statistics to represent their production per 36 minutes in order to level the playing field, so to speak. However, I believe that representing the players' contributions on a basic, per-game basis gives a better indication of how they fit with the team, at least in this case. (Note to 3QC reader DieSlowKeyshawn: you're welcome.)

It's no secret that Alston's a poor shooter--he's shot better than 40% only twice in 10 NBA seasons, most recently in 2004/2005--but I don't think anyone would have anticipated that, after a solid sample size of 11 starts, he'd wind up shooting 22.2% from three-point range. On some level, it irritates me that any analyst who dismissed this trade with a pithy remark along the lines of, "But Alston isn't half the shooter Nelson is!" has wound up being correct with respect to three-point shooting. Oddly, as we saw in the team statistics, the Magic have shot lights-out in Alston's starts, despite his abysmal individual shooting.

Alston makes up for it, though, with his brilliant decision-making. No, he's not John Stockton or Chris Paul, but he usually makes the smart play. That's evidenced by his team-best pure-point rating, but also by plain ol' empirical observation. He may be a poor shooter, but he picks his spots well, and is more than willing to make the extra pass. He runs the pick-and-roll well, although he's much more comfortable driving the ball all the way for either a layup or a kick-out to a three-point shooter than making a dump-off pass to the rolling big-man. I don't have a problem with that, actually. Either he'll finish at the rim, draw a foul, or find an open perimeter shooter. Any of those options is better than the alternative, which is his just spotting up and taking a jumper. Did I mention he's a poor shooter? Twice in 11 starts has he exceeded 50% shooting from the field. That might have to change.

The early returns on Alston mostly match our expectations. At 32, he's an unselfish, pass-first point guard, albeit with an erratic shot, on whom the Magic can rely. Having spent one season with Magic coach Stan Van Gundy in Miami, this team's offense, and although he runs it slightly differently than Nelson does--40% of his shots come in the immediate basket area, compared to only 23% for Nelson--it rarely misses a beat with him on the floor. He'll make a fine backup to Nelson next season, and right now it appears as though he's good enough to lead the Magic well into the playoffs. Offensively, anyway. As I noted earlier in this post, erivera7 will cover Alston's defense in the near future.