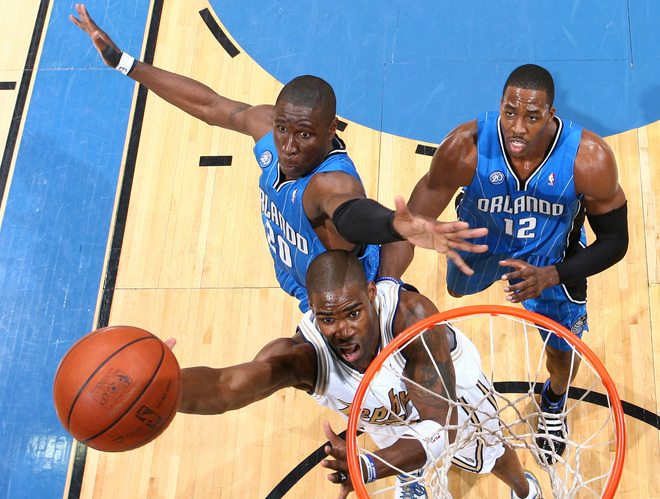 The Orlando Magic completed a 4-0 season-sweep of the Washington Wizards by defeating them, 112-103, fueled in large part by Mickael Pietrus, who started at small forward for the injured Hedo Turkoglu. The man they call Air France had the best all-around game of his Magic career with a team-high 21 points, as well as 11 rebounds, a career-high 6 assists, 2 steals, and 2 blocks. He also hit 5 of Orlando's 12 three-pointers on the evening. Dwight Howard added 18 points, 13 rebounds, a career-high 7 assists, and 5 blocks to aid Orlando's cause, but he nearly gifted the game to Washington with three costly fourth-quarter goaltends. The Wizards, wearing their throwback Chicago Zephyrs uniforms, were led by Antawn Jamison's season-high 36 points. Caron Butler scored a mere 5 points on 1-of-7 shooting in the first half before leaving due to a sore hamstring, but the Wizards did not seem to miss his offense. Nick Young had his way with J.J. Redick and scored 20 points on 8-of-15 shooting. Washington trimmed what had been a 14-point deficit to 1 in the fourth period, but Orlando was nonetheless able to secure the win.

As the chart shows, Orlando's offense wasn't a problem. Four other Magic players finished in double figures: Rashard Lewis (19), Rafer Alston (18), Tony Battie (13), and J.J. Redick (10). The Wizards tended to over-commit defensively, leaving cutters wide-open at the hoop for easy finishes. That's the analytical explanation for how Howard and Pietrus combined for 13 of Orlando's 24 assists, but we could just as easily write it off as a Friday the 13th fluke. Aside from Pietrus, the Magic didn't shoot their three-pointers particularly well, but they carved Washington up inside.

The same can nearly be said for Orlando's own defense. Rashard Lewis has done a heckuva job defensively in his Orlando tenure, adapting to playing a new position; one statistician believes he's been the NBA's best defender this season. But tonight, Jamison just made him look silly. What makes him a tough cover is his ability to finish around the rim with either hand, from any angle; he is one man against whom I believe most NBA players would want to avoid playing HORSE. Jamison juked and spun around Rashard all night. I'll give Rashard a bit of a free pass, since Jamison is only the second power forward to light the Magic up this year; Chris Bosh was the other one, and Howard checked him for most of that game.

But Lewis wasn't the only Magic player who struggled defensively. Redick got torched, too, and the team's defense was a step sluggish overall. Thankfully, Howard cleaned up their messes whenever possible, including one weakside, fast-break rejection of what appeared to be an open layup for Javaris Crittenton.

Before I wrap this recap up, I want to touch on Alston's great night. Rafer had only 2 assists, but I can live with that when other people--Howard and Pietrus tonight, for instance--are moving the ball. His 18 points were the most he's scored since joining the Magic, and his 6-of-11 shooting is the second time he's shot over 50% in a single game with Orlando. Going against one of the league's worst defenses can do that for a guy, I know, but it's at least encouraging that he's strung together solid consecutive games.

I'd also like to mention that for the second close game in a row, it was Redick on the floor in crunch time, not Courtney Lee. The Magic's rookie, starting two-guard missed 8 of his 10 shot attempts tonight, and although his defense on Butler was solid, his grip on that starting job is slipping. Even if J.J. were struggling, which he isn't, Courtney still would probably be in danger of losing his job to Pietrus. Then again, maybe coach Stan Van Gundy would prefer to start Lee anyway, let him play through his mistakes, so as not to kill his confidence.

The reason this game was so close was Washington's clear advantage in terms of effort. I don't mean to suggest that the Magic didn't want this game, but the Wizards did outwork them. The talent gap was just too wide, as was the experience one. The game effectively ended when Crittenton, in his second season, got whistled for traveling with his team trailing by 6 and 58 seconds to play. Even Jamison, an 11-year veteran, was guilty of making silly mistakes, having traveled on the previous possession.

Ultimately, we can debate the merits of Orlando's effort all we want, but we can't debate the result. Orlando's win is its 6th in 7 tries, and it remains only 1.5 games back of Boston for the Eastern Conference's second seed.