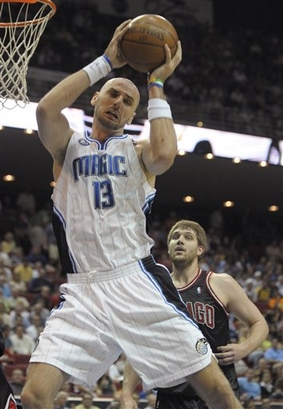 The Orlando Magic formally clinched a playoff spot in Wednesday night's 107-79 victory over the visiting Chicago Bulls, whom they dominated from start to finish. Curiously, it wasn't the Magic's starters doing the damage. Reserve power forward Tony Battie, who did not play in Orlando's previous game, led Orlando with 18 points, while reserve center Marcin Gortat recorded 13 points and 15 rebounds for his second career double-double. J.J. Redick scored 13 points on 4-of-6 shooting, further cementing his spot in Orlando's rotation. The Bulls shot 31.4% from the field and committed 16 turnovers, due in large part to Orlando's stifling defense, which all but eliminated Chicago's ball movement and forced the Bulls to take contested perimeter jumpers. The Bulls are a one-on-one, jump-shooting team anyway, but they were clearly out of their element tonight.

Gortat and Dwight Howard themselves combined for 14 points and 8 rebounds in the first period, in which Chicago registered 13 points and 8 rebounds itself. It continued the Magic's recent trend of dominating Chicago's bigs, most notably in February 2007, when Howard and Darko Milicic outrebounded the Bulls on their own, 32-31. It's a good thing that Gortat and Battie brought their "A" games, because Howard struggled with foul trouble and Rashard Lewis had arguably the worst offensive game of his career. Lewis missed all 9 of his shot attempts in 24 minutes, and went 3-of-5 from the foul line. Tonight was the 25th game of Lewis' career in which he went without a field goal, but in none of the previous 24 did he attempt more than 4 field goals or play more than 19 minutes. Worrisome, especially given just how off his shots were. Wide right, wide left... this wasn't a case of a guy's shot rattling around and out. It was rarely on line.

Apart from Howard's foul trouble and Lewis' offensive woes, it's hard to find much to complain about. I mean, Tony Battie swished a corner three-pointer to end the third quarter. That's the kind of night it was.

Hopefully, this dominant effort will boost the Magic's confidence, something Gortat has in abundance:

They're only one game back of the Boston Celtics in the loss column and still have a chance to overtake them for the Eastern Conference's second seed. Impossible? No. Improbable? No more improbable than losing by 18 to a mediocre team one week, then turning around and beating it by 28 shortly thereafter.

Orlando's playoff tune-up continues on Friday against the Washington Wizards.