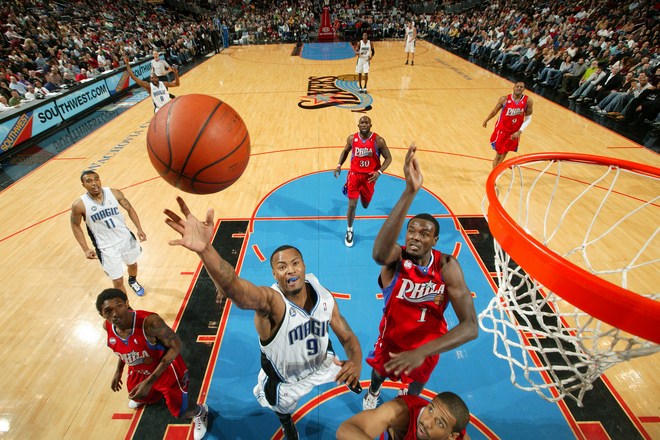 In one of their most impressive victories of the season, the Orlando Magic rallied to defeat the Philadelphia 76ers, 106-100, after trailing by as many as 11 points in the fourth quarter. Rashard Lewis and Hedo Turkoglu led Orlando with 23 points each, combining to make 15 of their 23 shots and 8 of their 13 three-pointers. Courtney Lee shook off a frigid first three quarters to score 13 points in the fourth, in which Orlando outscored Philadelphia, 36-20, to steal the win and to sweep the season-series.

After last night's loss to Detroit, I expected the Magic to play with more pride, and hoped they would jump all over Philadelphia early. But they didn't, and in fact came out flat and a step slow. Dwight Howard couldn't get anything going inside, the Magic had no answer for the 76ers' wings (Andre Miller, Andre Iguodala, and Willie Green combined for 64 points), and Courtney Lee was the only Magic player able to get open looks. Prior to tonight, Lee had attempted no more than 11 shots in any single game of his career. Tonight, he let fly 18 times--12 from three-point range--as the Magic left him open in order to double-team Howard down low. With 9:59 to play, Thaddeus Young connected on a mid-range jumper to give Philly an 84-73 lead, which appeared to put Orlando on ice.

Magic coach Stan Van Gundy immediately called timeout, and melted that ice. The Magic responded with a 13-1 scoring run capped by Lee's deep three-pointer, which gave the Magic a 1-point lead with 6:28 to play. From there, it was their game to lose, even on Philadelphia's home floor; even when Andre Miller scored 10 straight 76ers points in a 2-minute span, one never got the sense that they would win. We've seen the Magic close too many games out during Van Gundy's tenure to believe they would lose once they took that lead. Philly did not have the look of a team that would fend off the rally, and that was never more apparent than when they left Marcin Gortat wide open under their own basket for a slam-dunk, which gave Orlando a 104-100 lead with 15 seconds to play. After Iguodala made his second of two free throws--he missed the first attempt--Philadelphia went into a full-court press, and Gortat slipped up the floor unaccounted for.

It's hard to get excited about a game in which the Magic played so poorly for so long, but considering that they put the clamps on a reasonably talented team, on its home floor, on the second night of a back-to-back set... well, that's impressive. Even more impressive, though, was the defense down the stretch. Dwight Howard made two key blocks in the final half-minute of the game, and Orlando grabbed 15 of the last 20 available rebounds. That's an admirable effort. I doff my cap to every Magic player, but especially to Anthony Johnson, who has excelled since returning to the bench. A.J. missed 6 of his 8 shots, but nonetheless scored 7 points, grabbed 5 rebounds, and handed out 6 assists in 20 minutes. The Magic trailed by 13 when he entered the game for Rafer Alston late in the third quarter; they led by 4 when he exited for Alston with 2 minutes to play, and although raw plus-minus can be deceptive in some instances, I believe tonight it paints an accurate picture of how valuable Johnson can be to this team. The man they call "Dad" deserves praise for how well he played tonight.

You'll want to remember this game in 20 years, when you look back on J.J. Redick's NBA career. Redick picked up two technical fouls--doubling his career total--and was ejected. The first came as part of a double-technical with 76ers forward/insitigator Reggie Evans, with whom he exchanged words during one trip up the floor. After being whistled for the double-technical, Redick pled with the referee Benny Adams, and apparently said too much. Adams whistled J.J. for another technical, which ended his night prematurely.