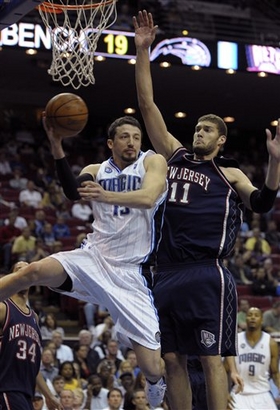 In a return to form, of sorts, the Orlando Magic dealt a big loss to a lesser opponent as they defeated the New Jersey Nets, 101-84, on Sunday evening. Dwight Howard's 30 points and 16 rebounds, coupled with Hedo Turkoglu's 8 assists and some timely three-pointers from Mickael Pietrus (a day after his 27th birthday), were enough for the Magic to end the Nets' four-game winning streak. Devin Harris scored 28 points and recorded 12 assists, but he had to carry too much of the offensive load as starting shooting guard Vince Carter sat out due to a sore elbow. Rookie center Brook Lopez scored 19 points and grabbed 12 rebounds in his first matchup against Howard, and even swatted one of his dunk attempts.

The most significant thing we can take away from this game is its first-quarter score. The Magic jumped on the Nets early, winning the opening period by a score of 32-18. That 14-point lead held through the next three quarters as the Magic's offense sputtered and defense bent. New Jersey was simply unable to dig itself out of that hole, and never seriously challenged, although it did draw within 9 points with 3:56 to play. Pietrus' fourth three-pointer of the game on Orlando's ensuing possession sealed the victory.

Stan Van Gundy told the press after the game that he was pleased with Howard's effort tonight:

"I thought Dwight has played harder than he has at anytime since we've come off the [four-game West Coast] road trip," Van Gundy said. "...Everybody will focus on his points and rebounds...The real key I thought with him as a leader is that he brought a lot of effort and intensity tonight."

Indeed, one could see Howard's focus from the game's opening tip. On the team's second possession, he blew by Lopez along the left baseline and finished in traffic. Less than a minute later, he spiked one of Harris' shots into the Nets' bench.

Turkoglu manned the Magic's point guard position for most of the evening, and fared well. He and Howard ran pick-and-rolls on nearly every possession, and the Nets did not have an answer. Turk was able to either get into the lane and finish; dump the ball to Howard for him to score; or dish to an open perimeter shooter. In this sense, he is very much like Jameer Nelson, the Magic's All-Star point guard who will likely miss the rest of the season due to a torn labrum in his right shoulder. What distinguishes Turk from Nelson on the pick-and-roll is Turk's limited mid-range game. Nelson is proficient at pulling up in and around the free-throw circle if no other play is available; Turkoglu is more aggressive in getting to the rim, which becomes a liability at times because of his tendency to get stripped or to lose the ball out of bounds. Still, the Magic should be somewhat encouraged that Turk got so much work in at that position tonight, albeit against one of the league's lesser defensive squads.

Tyronn Lue, whom the Magic acquired to shore up the point guard depth in the wake of Nelson's injury, played only the final two minutes of the first half. He was fouled on a shot attempt and made the resulting free throws. Defensively--and defense is his calling card--he was able to keep Harris in front of him and force him to take contested three-pointers... which he made. The Magic can live with Harris getting trigger-happy from the outside, as he's a career 31.7% three-point shooter. All in all, Lue looked decent in the two minutes he played, but we will have to wait for him to see extended minutes before making a fair evaluation.

One could argue that every game is more important for the Magic than it would have been if Nelson were healthy, but this one was especially important. The Boston Celtics and Cleveland Cavaliers, the only teams ahead of the Magic in the Eastern Conference standings, each lost on their home floor today to Western Conference opponents. The Magic likely won't be able to catch either team with Nelson out, but they need to seize every possible opportunity to gain ground. Tonight, they did. Good.

Orlando will face a tough test this Wednesday, their last game before the All-Star break, when they face the Denver Nuggets.