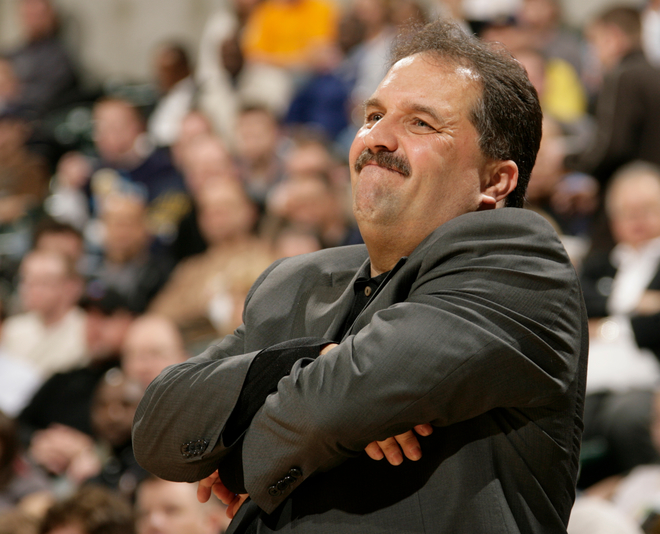 The Orlando Magic lost to the Indiana Pacers, 107-102, on Friday night in a game they'd probably like to forget. Danny Granger poured in 33 points against the Magic, who (in)famously passed on him in the 2005 NBA Draft in order to select Fran Vazquez, who has yet to join the team after inking a long-term deal with FC Barcelona. T.J. Ford added 21 points and 5 assists, while Troy Murphy had his way with Rashard Lewis, scoring 20 points on only 9 shot attempts while grabbing 8 boards. Dwight Howard led the Magic with 21 points and 20 rebounds, but his focused waned during a streak of possessions during which he believed he was fouled. The Pacers, who do not have a credible inside presence, nonetheless managed to block 7 of his shot attempts. Hedo Turkoglu contributed 20 points and 11 assists for Orlando, while J.J. Redick had arguably the best overall game of his three-year career with 17 points on 4-of-7 shooting. He also drew two (!)charges.

We can almost completely attribute this loss to a lack of focus on Orlando's part. Redick and Turkoglu were the only Magic players who were consistently aggressive, accounting for 14 of the team's 33 free throw attempts. The Magic were stymied by a Pacers team that was determined not to let them run; the Pacers punted on the offensive glass, grabbing 4 in 44 opportunities, but the strategy worked. By sprinting back on defense immediately after the release of a shot, they eliminated Orlando's ability to push the tempo, which is already compromised due to the sluggish Anthony Johnson's running the point. When Orlando managed to successfully complete an entry pass to Howard--tonight, a simple task turned into a chore against the league's 18th-ranked defense--Indiana swarmed him immediately, double- and triple-teaming him and sending him to the foul line. He took 12 free throws, and although he deserved to shoot a few more, it probably would not have mattered. Dwight connected on only 5 of those 12 attempts.

Usually, when Dwight can't get going inside, the Magic can count on their outside shooters to spark their offense. That was not the case tonight. Lewis had another poor shooting night, going 6-of-15 from the field and 4-of-11 from long range. He didn't force the issue, and many of those looks were open and in the flow of the offense. Still, one wonders why Lewis was reluctant to drive to the bucket, or at least post-up. Usually, coach Stan Van Gundy calls Lewis' number when he's cold from outside, but that was not the case tonight.

The game was simply embarrassing for the Magic, who had no answer for Granger. Not many teams do, as he's the league's fifth-leading scorer, but they still should be miffed that they let him shoot so many uncontested jumpers.

The Magic have a chance to bounce back this Sunday against New Jersey. Newly acquired point guard Tyronn Lue should be available, but his impact will likely be minimal at best; coach Van Gundy is sticking with rookie shooting guard Courtney Lee as Johnson's backup at the point until further notice. Curious.