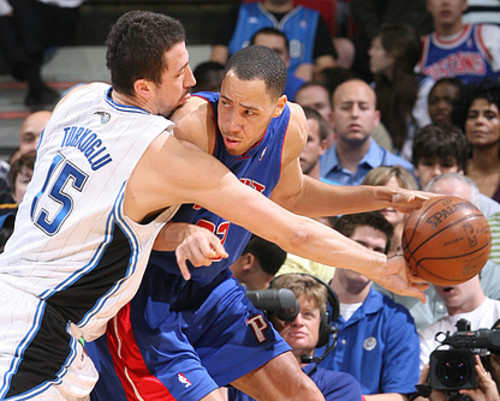 The Orlando Magic proved to be just what the slumping Detroit Pistons needed to end their eight-game losing streak, as the Pistons won, 93-85. Orlando led by 8 points at the half, only to lose control of the game in the third quarter as Detroit doubled them up, 28-14, in the period. Richard Hamilton once again proved to be the question for whom Orlando had no answer, scoring 31 points on 11-of-18 shooting, and getting whatever shot he wanted; Courtney Lee, charged with guarding Hamilton most of the night, is an excellent defender, but he can't use those defensive skills if he can't get to Hamilton. Detroit's series of screens slowed Lee down sufficiently for Hamilton to go off in his return to the starting lineup. Dwight Howard led Orlando with 21 points and 13 rebounds, but the Magic could not get their three-pointers to fall, missing 15 of their 19 attempts on the night.

This game was all too familiar for the Magic and their fans. Consider that Orlando:

Hell, Mickael Pietrus--in his first game back from a sprained right wrist--even injured himself against the Pistons for the second time this season. In the first meeting between these two teams, Pietrus broke his right wrist and missed nearly a month. Appropriately enough, Pietrus suffered his shoulder injury--ESPN play-by-play man Kevin Calabro speculated that it was a stinger--tonight trying to chase Hamilton through a screen. When he went down, Hamilton broke free in the along the left baseline and drilled a long jumper.

There's little point going over this same story again. The only variable--and here's what's frustrating for me, because it probably won't ever happen again--is that Orlando forced Detroit into some silly mistakes. The Pistons turned the ball over roughly once every five trips down the floor. That's remarkable, considering the fact that when they eliminated the Magic from last year's playoffs, they turned the ball over three times in 83 trips down the floor. I'm not sure what the Magic are going to have to do in order to get over the hump over the Pistons. Prior to the game, Brian Schmitz asked the following question:

The question is rhetorical, but no less valid. Detroit had lost 8 straight games; was below .500 after the All-Star Break for the first time since 2001; and missing Allen Iverson, its Hall-of-Fame shooting guard, who also happens to be one of the most notorious Magic-killers in history. When the Magic force the Pistons to commit 15 turnovers, and when Dwight Howard posts 21 points and 13 rebounds in the same game, they should win handily. However, Rashard Lewis and Hedo Turkoglu, Howard's mates in the starting frontcourt, struggled against Rasheed Wallace and Tayshaun Prince, respectively. There's no way the Magic can beat the Pistons, even in a slump, if both those players have bad nights.

Lewis only managed to shoot 10 times in 38 minutes, and turned the ball over 4 times, as Wallace gave Lewis no room with which to work and did not bite on his signature head-fakes. It was a slightly different defensive approach by the Pistons, who usually use Wallace to check Howard inside. Instead, McDyess and Jason Maxiell had that task for most of the game, with Kwame Brown filling in for 4 minutes. Howard got his points, but they didn't come easily, as he took a beating and earned a technical foul for arguing too much with the referee Ken Mauer. It's a shame that Lewis and Turkoglu were so stymied, since the loss quandered Rafer Alston's solid outing (14 points, 3 rebounds, 6 assists, 3 steals, and 2 turnovers in 31 minutes).

Bottom line: the Magic can't worry too much about this game, which really didn't tell them anything they didn't already know. The Pistons are in their head, they can't win if they play at a snail's pace, and--here's what I'm most worried about--their defense stinks lately. In its last 7 outings, Orlando has allowed its opponents to post 720 points in 632 possessions for an offensive rating of 113.9, and that figure still accounts for their domination (80 points allowed in 87 possessions) of Charlotte last Friday. At this rate, the Magic will be lucky to split the last 24 games of the season. 54-28 is about the best they can hope for if they keep playing like this. Why, yes, I am disgusted. Whatever gave it away?

Enough snark. It's back to business tonight in Philadelphia.