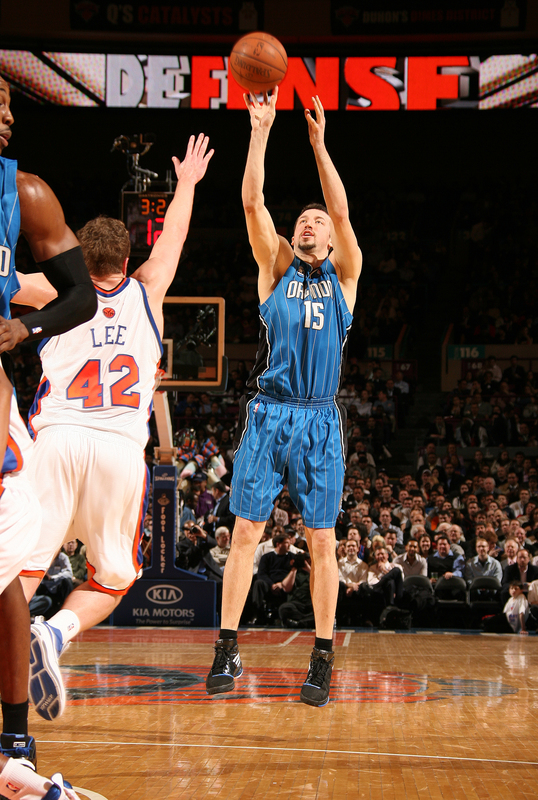 The Orlando Magic fended off a furious, inspired rally from the New York Knicks to deal them a 114-109 loss. Hedo Turkoglu, the Magic forward whose wife is expected to give birth to their first child tomorrow, scored 33 points on 11-of-17 shooting to lead the visitors. Dwight Howard posted 24 points and 21 rebounds for his sixth 20/20 game of the season. New York, which trailed by as many as 17, was led by Nate Robinson, who scored 32 points off the bench. Starting power forward Al Harrington and starting shooting guard Wilson Chandler scored 26 and 27, respectively. As best I can tell, tonight's game marked the first time since January 13, 1996, the the Magic allowed three separate players from an opponent score at least 25 points each. Those players were Vinny Del Negro (30 points), David Robinson (27), and Chuck Person (25) of the San Antonio Spurs, who won, 106-105, that evening. WEIRD COINCIDENCE ALERT: According to the game recap, then-Spurs guard Doc Rivers blocked Penny Hardaway's shot at the buzzer to secure victory for San Antonio. Three years later, the Magic hired Rivers to be their head coach, and he now helms the world-champion Boston Celtics.

Despite the victory, there isn't much good to say about this game from the Magic's perspective. Turkoglu was magnificent, and Howard was brilliant early (12 points, 9 rebounds, and 4 blocks in the opening period), but the Magic failed to put the Knicks away whenever they had a chance. The statistical categories which I consider to measure effort--offensive rebounding and turnovers--both favor the Knicks; although the Magic won the overall rebounding battle, 46-42, the Knicks were able to gather 15 of their own misses, or 28.3%. For the Magic, who have the league's best rebounder, to allow an opponent without a credible inside presence, a team which ranks 27th out of 30 in offensive rebound rate, to out-work them on the glass, is simply unacceptable.

Maybe this game looks good in a vacuum. The starting backcourt of Rafer Alston and Courtney Lee had solid offensive nights offensively, combining for 30 points on 10-of-18 shooting. But after watching the Magic let the Knicks claw back from a 17-point deficit and nearly steal the game from them, I'm in no mood to praise anyone. In fact, as good as Lee was offensively, he's lucky he didn't get whistled for a critical foul late in the game. With Orlando leading by four and only 10 seconds to play, the Knicks' only hope was a three-point basket, a quick steal, and another basket. Robinson raced upcourt with the ball and pulled up to shoot from a few feet behind the top of the three-point arc. Lee, an excellent defender, made a rookie mistake and contested the shot too eagerly, barreling into Robinson and knocking him to the floor as the shot bounced hard off the backboard. Somehow, the play wasn't whistled a foul. Rashard Lewis secured the rebound and dished to Turkoglu, whom Knicks guard Chris Duhon fouled immediately. Turk hit one of the two ensuing free throws to put the game away.

Let me put it this way: if the roles were reversed, and it were Lee who got decked on what should have been a three-shot foul late in the game, I'd be irate. We all would be, I imagine. It's hard to look at the effort the Knicks gave in the second half and say, "they didn't deserve to win." Of course, the same can be said for the Magic in the first half, and they ended up winning.

A win is a win is a win, and all that, but the fact that it took a season-best effort from Hedo, one of Dwight's 20/20 games, and a late non-call to secure victory over the now-9-games-below-.500 Knicks does not sit too well with me. Then again--and I'm playing devil's advocate a lot in this post--it took Chandler's hitting a career-high-tying 6 three-pointers (he's a 31% long-range shooter in his career) and an epic choke job by the Magic for the Knicks to nearly win it. So there you go.

Hats off to New York, which played a great, inspired game. The Magic need to regroup tomorrow, as they have another back-to-back set beginning Friday against Detroit. They need a reality check, or something, because their effort in six of the last eight quarters since blowing out Miami on Sunday has been lackluster. Stan Van Gundy knows how to get the most from his team, so I'll trust he'll do the right thing.