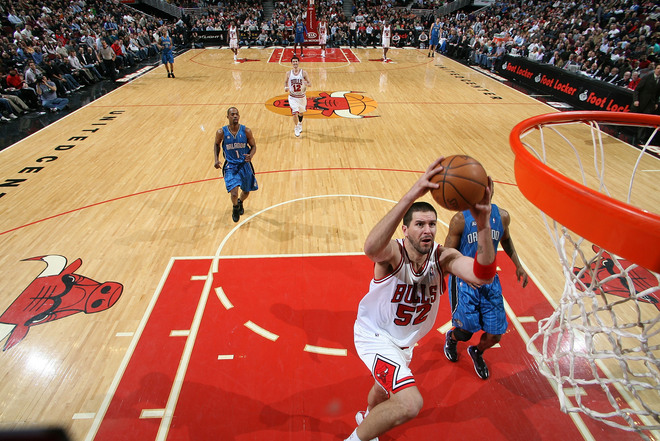 Brad Miller of the Chicago Bulls goes up for an easy, fast-break dunk against the Orlando Magic in Chicago's 120-102 victory

The Orlando Magic lost to the Chicago Bulls on Tuesday night, 120-102, in what may be their most embarrassing defeat of the season. Dwight Howard registered game-highs with 26 points and 12 rebounds, and Courtney Lee scored 12 of his 14 points in a third-quarter surge that nearly got the Magic, who trailed throughout, back into the game. Those were the lone bright spots for Orlando, which let the Bulls drill them from the perimeter. The starting backcourt of Derrick Rose and Ben Gordon combined for 42 points on 20-of-34 shooting; five other Bulls scored in double figures, including the recently acquired Tim Thomas, who scored 17 in 24 minutes.

Before we go any further, here are Stan Van Gundy's thoughts, as transcribed by Brian Schmitz:

"There was no comparison in which team came prepared tonight. We were lucky it was even as close at it was. ... They were very good and our guys didn't try."

Hard to argue with that.

As the four-factors chart shows, the Bulls blew the doors off the Magic, out-working and out-smarting them in every important phase of the game. Magic fans will likely make Rashard Lewis the scapegoat in this one, but really, everyone is complicit in this defeat. One might be tempted to look at the final score and think, "Well, the Magic just caught the Bulls on a good shooting night." While that's true--the Bulls shot 56.5% from the field--much of that is due to lazy defense and a lack of effort. The Magic yielded far too many open jumpers to every Bulls player, but especially to Rose and Gordon, early on. Those two got into enough of a groove that they could hardly miss the rest of the game, even when their shots were contested, off-balance, or otherwise wild.

We need to discuss Lewis before we go much further. Initially, I thought he was in for a big game, as he hit 3 of his first 4 shots--all wide-open three-pointers. That was in the first 7:27 of the game. He went scoreless the rest of the way, and in spectacular fashion, missing an open layup, a barely-contested baby hook, and a dunk. A few minutes after the last miss, Lewis fumbled an admittedly bad pass by Rafer Alston, which Brad Miller--the 6'11", 250-pound, 32-year-old Miller--scooped up and took down the court for an emphatic dunk. That's the photo you see at the top of this story. Which is more astonishing: that Brad Miller jumped high enough to get his hands above the rim, or that Rashard Lewis failed to beat him to the rim to foul him? Brad Miller outran Rashard Lewis. That's the sort of thing that happened tonight. A lot.

Dwight Howard was everywhere on offense, but absolutely invisible on defense. Sunday, he clearly came out to send a message to the Miami Heat on national television, aggressively challenging every shot in the paint and discouraging dribble penetration. While it's true that he had fewer opportunities to block shots against a jump-shooting team like the Bulls, it's also true that he was not nearly active or engaged on that end of the floor. This isn't to pick on him--as I said, everyone is complicit in this loss--but the Magic might have been able to win this one if he made up his mind to dominate late in the game. With 5:11 to play and the Bulls leading by 13, Joakim Noah slipped by Dwight for a huge tomahawk dunk. Nobody was even in the picture. Maybe in a closer game, that's a different story, and Dwight rejects Noah. But in this game, that was the story. Joakim Noah, who can charitably be called "offensively limited," going around the leading candidate for the Defensive Player of the Year award, completely untouched.

As poorly as the Magic played, they were still in it as late as the third quarter, drawing to within a point after an ill-advised pull-up jumper by Courtney Lee; in his defense, he was on a tear, so I can overlook that heat-check. Kind of.

I really don't want to think too more about this loss, and if you saw it, I'm sure you wouldn't blame me for wanting to stop. I do want to add, though, that Rafer Alston made some really bad mistakes tonight. The Brad Miller interception was but one. Perhaps my favorite--if it's not on YouTube, and subsequently linked on Ball Don't Lie and Basketbawful, I'll be shocked--came when Alston tried to receive an inbounds pass after a made Bulls basket. He was practically on top of the inbounder (Lewis?) on the baseline. As soon as Lewis passed the ball in, Chicago's Kirk Hinrich raced in behind Alston and poked the ball out of his hands and into Lewis' gut. Lewis was still out of bounds. Turnover. Not sure to whom the scorer credited the turnover, but to me, that one's on Rafer for being so darn close to the baseline, and for not being aware of Hinrich's presence. In 3 games (87 minutes) with the Magic, Alston's shooting 30% from the field, 20% from three-point range, and committing 3 turnovers per contest... and that's counting his 1-turnover performance in his Magic debut.

No sense in dwelling too much on this game, though. The Magic go right back at it tomorrow night in New York, where they're liable to get run off the floor by 30 or more if they mail the game in as they did tonight.