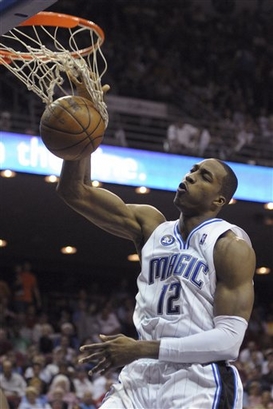 The Orlando Magic used Dwight Howard's inside dominance and team-wide three-point shooting to deal the Miami Heat a 122-99 loss on Sunday. Miami Heat guard Dwyane Wade established a new career-high with 50 points, but it wasn't nearly enough to compensate for his teammates' complete inability to score. Michael Beasley was the only other Heat player to reach double figures, scoring 14 points, but he shot only 6-of-15 from the field. Anchored by Howard, the Magic's offense was much more balanced, with six other players scoring in double figures. The Magic's decisive advantage from three-point range (17-of-32 to Miami's 6-of-21) and on the boards (53 to 28) offset some sloppy ballhandling from Hedo Turkoglu and Rafer Alston, who combined for 10 turnovers. The Heat, who set a franchise record-low with only 4 total turnovers when they last played the Magic, committed only 5 more today.

The Magic appeared to come out eager to prove a point in today's nationally televised game, just 4 days after suffering a 32-point beatdown in New Orleans in a similarly broadcasted affair. They scored 39 points in the first period, the most the Heat have allowed in any first quarter this season. Dwight Howard scored 15 points and grabbed 5 rebounds in the opening frame, while Rafer Alston scored 6 points and handed out 7 assists. The players looked confident, which prompted me to send this Tweet. The Magic have not played this well, nor looked so happy, in several weeks.

The pattern continued throughout the game. Alston's second three-pointer of the opening period, at the 5:39 mark, gave the Magic their first double-digit lead; they would maintain that double-digit lead for the rest of the game. Miami, the league's tenth-most efficient defensive team, struggled to get stops. When Dwight Howard wasn't abusing Jermaine O'Neal with a series of spin moves and rolling hooks in the low post, the Magic's perimeter players were driving and dishing to one another for three-pointers, swinging the ball too quickly for the Heat to react. The Magic committed 17 turnovers, but most of them--from my memory, anyway--were on fumbled passes or lost handles, not careless passes thrown into the teeth of the defense.

Brief observation: Hedo Turkoglu looks like a new man now that he doesn't have as many ballhandling responsibilities. In two games with Alston in the lineup, Turk is a combined 13-of-22 from the field and 7-of-15 from three-point range for 44 points. He's also grabbed 16 rebounds in those games. I like this newer, fresher Turkoglu. So do the Magic, I wager.

In today's game preview, I posed a series of questions that I hoped the game would answer. We'll take a look at them after the jump.

In 35 minutes, Howard scored 32 points on 11-of-14 shooting. He added 17 rebounds. Jermaine O'Neal blocked one of Howard's shots, but that's the extent to which he affected Howard's game. Dwight could not be stopped tonight. O'Neal is renowned for his defense, so it's obviously encouraging to see Dwight take it to him.

It's tough to say, because although Chalmers had an off night (2 points on 1-of-7 shooting, 2 assists, 3 steals), it didn't appear to be due to anything Rafer did.

Alston indeed ran the offense well, with a game-high 9 assists. He fed off the energy of the home crowd and his teamates at the outset; as I mentioned, 7 of his assists came in the opening period. He pushed the tempo appropriately and took good shots. And unlike in Charlotte on Friday, when he missed 8 times in 9 tries, Alston's shot was "on," insomuch as a 4-of-9 shooting night can be considered "on." The four turnovers, especially the one in which he airmailed a pass over Hedo Turkoglu's head and into the tunnel behind Miami's bench, we can live without. Historically, he is a player who does not commit many turnovers, so I'm not too worried at this point.

Not so much, no. Anthony Johnson had his finest game in weeks, with 12 points and 5 rebounds in only 17 minutes, but he was the only Magic player to give the team much of a lift during the first 45 minutes. J.J. Redick had 10 points, but 7 of them came after both coaches emptied their benches with less than 2 minutes remaining. We appreciate Tony Battie's 5 rebounds and 1 block, but were hoping for more from Marcin Gortat (0 points 3 rebounds, 4 fouls in 12 minutes). Given the way the starters played, the Magic didn't need much from their bench.

No, but not for a lack of trying. Wade scored 50 points, drew all 5 of Courtney's fouls, and just could not be stopped. Next question.

Apparently not. Lewis shot 4-of-5 from downtown on his way to an 18-point evening. They were a quiet 18 points, which is normal for Lewis.

Maybe it did. The Heat looked pretty tired after coming from behind to beat the 76ers yesterday. Then again, even with a few days of rest, they might not have been able to score more than 99 points. Wade's supporting cast looked awful tonight. I'll leave the discussion of Miami to the experts (like Winderman and Dave), but Wade scored 50 of his team's 99 points and made 17 of its 37 field goals. His teammates shot 20 of 59 from the field. Ouch.

Orlando now has its first winning streak in the month of February, which it will try to continue Tuesday night in Chicago.